Langley Alumni Gather on the Diamond 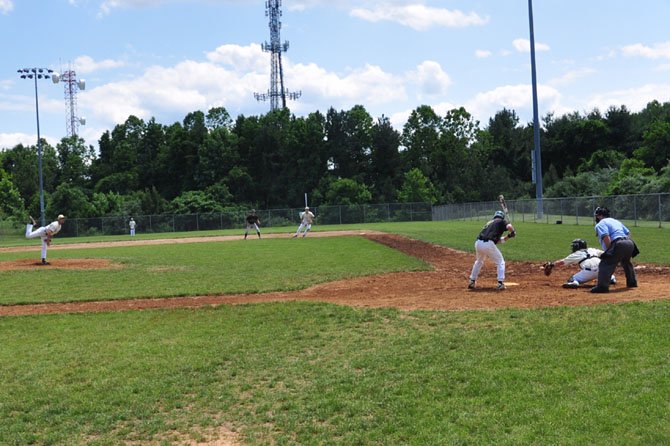 Great Falls — Members of Celebrate Great Falls and other residents spent the weekend taking part in traditions old and new, bringing together old and young as part of the first Great Falls Days events.

Nike Field hosted a baseball game Saturday afternoon that featured the Langley High School Varsity Team (fresh off their trip to the regional semi-finals) square off against a team made up of Langley baseball alumni. While most of the Langley alumni (the "green" team) featured graduates from the last year, they were coached by Vic Price, a member of Langley’s class of 1969 who was drafted by the Kansas City Royals and spent five years in the majors. 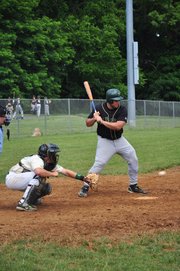 Price threw out the ceremonial first pitch, and later batted, getting a single in the eighth inning.

The Great Falls Historical Society brought old gloves, bats and uniforms from the community’s many baseball teams that were around during the 20th century, showing just how deep baseball’s roots in Great Falls are.

"It’s hard to imagine how they played with gloves that seem so small and skimpy," said Gregory Reisen, 8, who stopped by to watch part of the game before his own little league game. "I guess you had to be really good to make a catch and get a hit with those."

In addition to old equipment, the GFHS brought photos of Great Falls teams of the past, including the team from the Forestville School across several years.

"Great Falls used to be made up of a lot of dairy farms on large properties, and even though it was sparsely populated, people managed to get together often to play baseball," said Doris Carpenter of the GFHS.

The Langley Alumni edged the 2012 Varsity Team 10-9, in a nine-inning game. After the game, one of the organizers, Jim Mraz, invited the senior members of the varsity team to "cross over" to their new team, the alumni.

From left, a team of Langley High School baseball alumni and the current varsity team before their game at Nike Field Saturday, June 2.

"The seniors are now part of the green team family, and hopefully they’ll be back next year to play another one," Mraz said. "We want to make this an annual tradition."

Sandra Even of Celebrate Great Falls, who helped organize the game and other events throughout the weekend, said this was a simultaneous return to the community’s roots and a direction for its future.

"The earliest Spring Festival in Great Falls was a baseball game, and it makes sense that we try and connect players from different years at Langley," she said. "Langley baseball is a family, and by keeping them together, hopefully in the years to come it will be a bonding experience for anyone whose ever played at Langley."