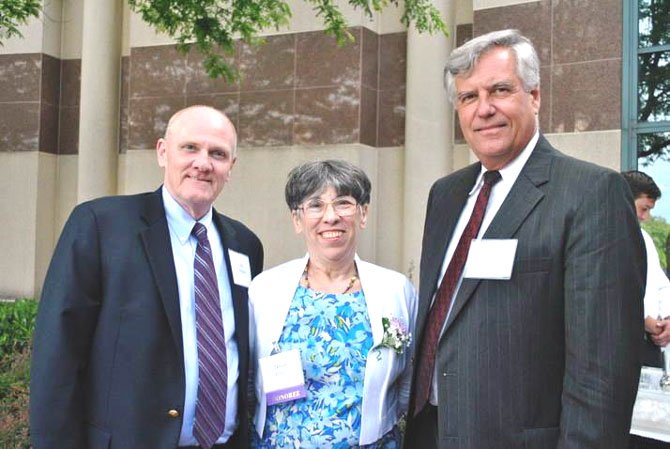 Celebrate Fairfax kicked off its 30th anniversary with a salute to the 2012 Lord and Lady Fairfax Honorees during a dinner and awards ceremony at the Fairfax County Government Center Tuesday, June 5.

"The tradition of honoring Lords and Ladies Fairfax began in 1984 as a unique way to recognize exceptional citizens of Fairfax County," said Lynne Strobel, chair of Celebrate Fairfax Board of Directors.

Each year, the Fairfax County Board of Supervisors selects two people from their district who have demonstrated superior volunteer service, heroism, or other special accomplishments to receive the award.

The event drew several hundred people, including community and business leaders as well as state and local elected officials.

"Tonight, we are honoring the stars of each district who make our communities strong," said Pete Murphy, a Celebrate Fairfax board member and the event’s master of ceremonies. "John Quincy Adams said it best: ‘If your actions inspire others to dream more, learn more, do more and become more, you are a leader.’"

*Kathy Albarado, President and CEO of Helios HR, an award-winning Human Resource firm based in Reston. She has volunteered her time and resources with Reston Interfaith, leading a winter coat drive; food drives and walks for the homeless. In 2009 Kathy was honored by the Washington Business Journal for her dedication to Community and Philanthropy. Helios was also recognized by the Reston Chamber as the "Best of Reston, corporate category." Albarado is an enthusiastic member of the Governing Board to Prevent and End Homelessness. In an opinion piece in The Connection Newspapers, Albarado wrote, "I am fortunate to now be in a position to support and give back to my community and I view it as a privilege to do so. Community outreach can and should become a part of an organization’s culture."

"On the Fairfax County seal are the Latin words ‘Fare Fac,’ roughly translated as ‘speak and act.’ Kathy is a real example of backing up her words with action," Bulova said.

*Delbert (Bill) Sheads, born in 1921, is a lifelong resident of Fairfax County. As a child, Sheads, whose father Cam operated a portable saw mill in the area, helped out by hauling logs, sand and gravel. During high school (1938-1941), he left home at 3:30 a.m. every Monday to pick up saw mill workers in Page and Fauquier County. At 18, Sheads joined the volunteer fire department, later becoming its Chief. He was at Ossian Hall, one of the grand Fitzhugh manor homes in Annandale, when it was burned as training exercise, and he remembers the fire fighters shedding tears as the magnificent home burned. For years, Sheads has been documenting his life story – which is also the community’s story - with extraordinary detail. He draws detailed maps and pictures to preserve the past.

"Bill has led a fascinating life and is gifted with amazing recall," Bulova said. "He has generously shared his memories through his writings, oral histories and work with the Burke Historical Society and the A Look Back at Braddock History Project."

*Tessie Wilson came to the area as a student at American University and earned a degree in Overseas Business. As the mother of a son and daughter, she naturally gravitated toward activities involving her children. She has been active in both the Girls Scouts and Boy Scouts, served as an officer on the PTA of both Bonnie Brae Elementary School and Robinson Secondary School, served as the treasurer of the Education Foundation for Fairfax County Public Schools. This led her to serve as the Braddock district representative to the Fairfax County School Board from 1999-2011. She is the Chairman and Founder of College Access Fairfax, a non-profit organization that assists parents and students in completing the FAFSA (Free Application for Federal Student Aid). She currently serves on the board of the Woodbury Woods Civic Association, and runs her own business, CW Accounting. She and her husband live in Fairfax.

*Doug Brammer serves as Verizon’s Government Affairs Manager in Northern Virginia. In his current position, Brammer is responsible for representing Verizon at the local and state government level as well as managing corporate philanthropy. He currently serves in leadership positions with a number of community organizations, including the Northern Virginia Community College Education Foundation, the Fairfax Chamber of Commerce, the Arlington Chamber of Commerce, Leadership Arlington, and the Boy Scouts of America. He also currently serves as Chairman of the Board of the Fairfax County Chamber of Commerce VALOR Foundation. The Valor Awards ceremony was established in 1979 to honor and recognize Fairfax County’s First Responders for their heroic acts. The Valor Scholarship Fund was established in 1989. The Scholarship Fund provides post-secondary educational scholarships to the children of our community’s Medal of Valor recipients. He is also the immediate past Chairman of the Board for the Arts Council of Fairfax County. He and his family have lived in Fairfax for 11 years.

*Martha Lloyd has served on the Fairfax-Falls Church Community Services Board for more than five years. In that capacity, she has been the chair of the Government and Community Relations Committee and served on the Executive Committee and has chaired the Community Services Board for two one-year terms—the maximum allowed. Lloyd has also been in the New Horizons Neighborhood Advisory Board since 2007, on the Laurel Grove School Association Board since 2009, and a member of The Links, Inc. since 2011. She has served on the Lee District Citizen Budget Advisory Board during our most difficult budget years and on the Workforce Committee for the Fairfax County Executive Strategic Plan. Martha also finds time to work with organizations that support our troops and provide mentoring, scholarships, and holiday fundraising.

*Don Hinman has been president of the Huntington Grove HOA since 2002. An active board member of the Lee District Association of Civic Organizations since 2009, Hinman also represents Lee District on the Board of the Fairfax County Federation of Citizens Associations. He was vice president of the Federation for two years and now chairs its Citizen Association Services Committee. He is also in his third year on the statewide board of the Virginia Legislative Action Committee of the Community Associations Institute. As HOA president, he advocates for increased use of native plants in landscaping and has helped obtain a county NEPP grant and coordinated installation of native plants in his townhouse community. Additionally, for almost every election since 2005, Hinman has served as Chief Election Officer in Lee District precincts. More recently, he represented HOA on the Penn Daw Special Study Task Force.

*Breeana Bornhorst is the Executive Director of the Northern Virginia Therapeutic Riding Program located in Clifton. During the past 11 years, Bornhorst’s skills have served to energize and grow a program with two horses, 15 riders, one instructor, and limited volunteers to one with 14 horses, more than 100 riders per week, nine instructors, three therapists, and a database of 700-plus volunteers. NVTRP offers therapeutic riding and hippotherapy to children and adults with disabilities, youth-at-risk, and military service personnel and their families in an inclusive community setting. NVTRP also offers therapeutic riding and community lessons through the Fairfax County Partakes. In 2011, NVTRP provided more than 3,100 lessons to 262 riders with more than 20,000 volunteer hours. As Chairman of the County’s Equestrian Task Force, Bornhorst has become a champion for the equestrian community by identifying opportunities for horses and their riders.

*Robert Scott Brown, owner of Cardinal Plaza Shell and former West Springfield High School graduate, is a hero for the community. Whether it’s through his station’s elaborate seasonal décor, enjoyed by the young and old, or providing the water and space for fundraising car washes, or giving his time and money to the local Little League, Brown loves to give back to his neighbors. Additionally, he has worked with local organizations such as the Springfield Youth Club, First Responders of Springfield, and West Springfield High School. He has also raised money for national and international charities, which include Fisher House, Operation Starfish, and St. Jude’s Children’s Hospital. By upholding the long-held values and traditions of our area, he has continued to make West Springfield a wonderful place to live.