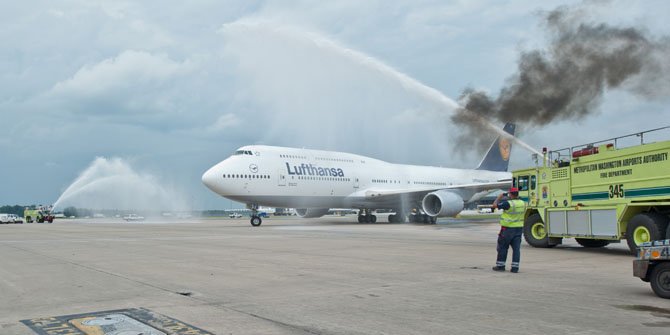 The new Boeing 747-8, operated by Lufthansa is met as it lands at Dulles Airport after its first ever commercial flight with a water cannon salute. Photo by Deb Cobb.

Richard Distefano, an Aircraft Maintenance Supervisor from Lovettsville, performs a post-flight inspection of the brand new Boeing 747-8 that just arrived at Dulles from Frankfurt on June 1. He is looking for safety issues like leaks, cracks or damage that occurred during flight. The 747-8 has four GEnx-2B67 engines, which are unique because they incorporate new scalloped edges, which improves fuel efficiency. At over 250 feet long, the plane is now the longest commercial aircraft built in the United States.

The first ever passenger flight of Boeing’s 747-8 Intercontinental landed at Dulles Airport on June 1, shortly after noon. Operated by Lufthansa, the new aircraft will fly the Frankfurt-Dulles route six days a week. New design features of the aircraft include wings with raked-back tips and engines with scalloping that enhances fuel efficiency. At over 250 feet long, the plane is now the longest commercial aircraft built in the United States.