Bruins, Spartans both win to advance to title game. 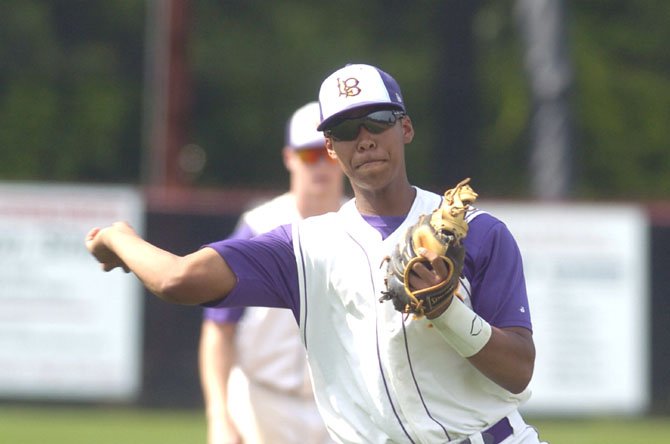 Alex Lewis, Lake Braddock's clean-up batter and third baseman, had a two-run double in the Bruins' three-run first inning versus Westfield in a region semifinals game at Madison. Photo by Craig Sterbutzel.

Burke — A trip to the Northern Region tournament title game and a seeding in the state playoffs were on the line last Wednesday evening, May 30 at Madison High School in Vienna where two regional semifinals baseball games took place. The double-header postseason action showcased contests between Lake Braddock and Westfield, followed by West Springfield versus Langley in the nightcap.

At night's end, it was the two teams from the Patriot District - Lake Braddock and West Springfield - which won, both in decisive fashion, to earn a spot in Saturday's finals where West Springfield edged the Bruins, 3-2, for the championship.

Both the Bruins (23-3) and Spartans, by reaching the region title game, automatically qualified for this week's Virginia State AAA tournament. Lake Braddock was scheduled to play a state quarterfinals round game at Cosby High (Midlothian) on Tuesday, June 5 of this week. That same day, West Springfield was set to host James River (also of Midlothian).

The Bulldogs, under head coach Chuck Welch, simply could not generate enough offense against Rogers, who tossed a complete game (7 innings) three-hit shutout. He struck out nine Westfield batters and walked one. At one point early on, Rogers fanned seven of eight hitters he faced from the first through third innings.

Westfield's best scoring threats were in the top of the first and fourth innings. In the first, senior shortstop Kyle Corwin, with one out, sent a deep fly ball into right center field for a double. Rogers retired the next two Bulldog batters to end that threat. In the fourth, junior second baseman Ryan Wittman knocked a two-out double down the left field line. But Rogers got the final out off a fly ball to center field off the bat of Jake Dercole, who had singled off Rogers two innings earlier.

Lake Braddock, meanwhile, gave Rogers early support by scoring three runs in the bottom of the first inning and two more in the second to take a 5-0 lead and gain a stronghold on the game.

It was a tough outing for Westfield left-handed starting pitcher Wade Arduini (3 innings), a First Team All-Concorde District first baseman this spring. The senior gave his team three innings in taking the loss. Following the Bruins' five runs over their first two innings, Arduini worked a scoreless bottom of the third inning.

The game's best defensive play - and one of the better plays one will ever see - came from Westfield right fielder Matt Pisarcik in the bottom of the fifth inning. With one out, Lake Braddock's Matt Spruill sent a scorching, opposite field rope towards the right center field gap. Pisarcki immediately bolted towards his right at full speed. The ball looked as if it would split the outfielders and go to the fence. But Pisarcki made an all-out, fully-extended dive and snagged the liner.

The play, which received a nice ovation from fans of both teams, had no bearing on the game's outcome and, in fact, the Bruins went on to score two runs in the inning on a two-run double by Rogers. But if the Northern Region put out a season top 10 web gems list, it would be number one.

Westfield, with the season-ending loss, finished the spring with an impressive 17-7 record. The Bulldogs enjoyed a successful postseason in which they reached the Concorde District tournament finals (losing to Robinson in the title game), then won their first two games at regionals - wins over Marshall and Yorktown - to advance to the semifinals. Overall, Westfield finished 3-2 in postseason play.

IN THE NIGHT'S second game, West Springfield, behind a bumpy but effective outing from senior right-hander Frank Sturek, took the early lead and went on to a 7-1 victory over Langley (Liberty District).

For Langley, the setback concluded a remarkable season which saw the Saxons go from a team struggling to play .500 baseball at the midseason mark to one of the Northern Region's elite teams. Langley, under head coach Kevin Healy, finished the spring season with a 15-11 overall record. The Saxons, who were 4-6 at one point of the season following spring break week, went 11-5 over the second half of the season, including four wins over six games during the postseason which saw Langley reach the Liberty District tournament finals before losing a 6-5 championship affair to Stone Bridge and then going on to win a pair of games at the 16-team regional playoffs to make it to the semifinals.

Langley reached the region final four with playoff wins over Robinson, 3-0, on May 25 in the first round, and defending region champion South County, 4-1, in a quarterfinals round game on May 28.

But against West Springfield, the Saxons gave up three runs in both the bottom of the first and second innings and never recovered. In the game, Langley, in facing pitcher Sturek, had five base hits (all singles) and coaxed three walks, along with two hits batsmen. But the Saxons only crossed the plate once - that coming in the top of the fourth inning when Michael Byrne, Langley's second baseman and No. 5 hitter in the lineup, earned a leadoff walk and eventually scored on an RBI single into left field off the bat of No. 9 hitter Dan Richardson, the team's left-handed hitting left fielder.

The fourth had the potential to be a big inning for Langley. Sturek, who earned the complete game win despite allowing 10 base runners and being, it seemed, in constant trouble, walked Byrne to start the inning. One out later, Langley's Gray Decker, the Saxons' left-handed hitting DH, roped an opposite field single into right field, advancing Byrne to second base. So, although trailing 6-0, Langley had a little rally brewing with runners on first and second with one out. Sturek got the second out on a fielder's choice before Richardson's single ended his shutout bid and got Langley within 6-1. Sturek, however, got the final out on a groundout.

West Springfield came back with a run in its half of the fourth to offset the Langley run and make the score 7-1. There would be no more runs over the game's final two-and-a-half innings and 7-1 was the final.

Langley left eight base runners stranded in the game, including three in the third when the Saxons could not take advantage of Sturke's two walks and a hit bats man.

Sturek, although he struggled at times, seemed to come up with the big pitches for outs when he needed them.

On the other side, Langley starting pitcher Jonathan O'Conner, a left-hander, struggled but hung tough through four innings of work. Only three of the seven runs he allowed were earned. Jack McSteen pitched well in two innings of shutout relief for the Saxons, striking out four in a row at one point.

The key base hits for West Springfield in its three-run first inning came on an RBI grounder single into left field from senior left fielder Daniel Allen (2 hits) followed by a two-run single on a line drive into center field by senior DH Connor Tagg. In the Spartans' second inning, junior shortstop and leadoff hitter Taylor Boyd plated two runs with a pop fly single down the right field line and senior center fielder Nick Stevens knocked in a run on a sacrifice fly.