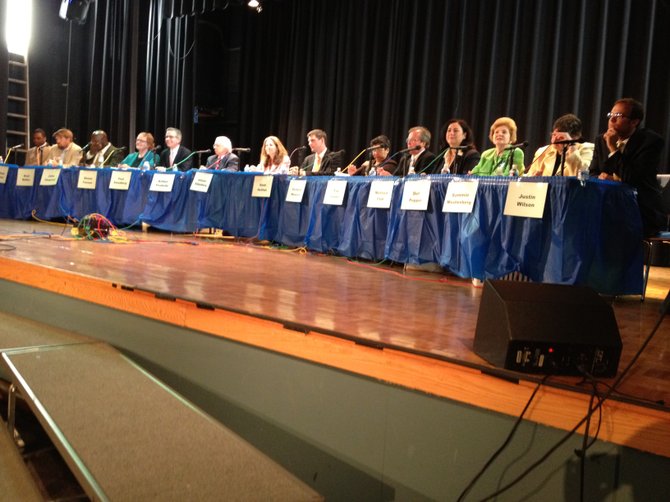 The Democratic primary is essentially a popularity contest. When all the votes are tallied, candidates will be ranked in order from those who received the most votes to those who received the least votes. The six candidates with the most votes will become the Democratic nominees. Voters can vote for as many as six candidates, although they can vote for any number they wish. Some have advocated “bullet voting,” selecting one or more candidates to maximize their support compared to other candidates. Although the General Assembly recently adopted new identification requirements for voters, those rules won’t be implemented until after the primary.

Where Do They Stand?

The future of Alexandria is on the line as 14 Democrats seek six seats on the Alexandria City Council in a hotly contested Democratic primary June 12. As the campaign heads into the final stretch, candidates are taking shots at each other in an attempt to stake out a spot for themselves in the winners’ circle. During a forum this week, several of the candidates went on the offensive. Boyd Walker was first, attacking Sean Holihan for his support of the waterfront plan and Tim Lovain for his comments in support of historic preservation.

“Sean, I think you are dead wrong on the waterfront. We don’t need any more density on the waterfront,” said Walker. “Tim, I’d like to say I own historic preservation because I’ve been trying to preserve buildings.”

A few minutes later, Donna Fossum went on the attack against Walker, criticizing him for failing to get permission before performing a partial demolition on a building he’s developing into a small business on Commerce Street.

“I found it very interesting that Mr. Historic Preservation was levied one of the largest fines in history for tearing down part of a historic building,” said Fossum.

THE SCALE OF DEVELOPMENT has been a dividing line among the candidates. Several candidates have staked out positions that have been critical of recent controversial decisions by the City Council. In addition to the waterfront plan and the Beauregard plan, decisions these candidates have criticized include redevelopment in Arlandria and a high-capacity transit project known as Corridor C in the West End. Candidates that have taken a hard line against these proposals are Victoria Menjivar, Sammie Moshenberg, Arthur Peabody, Allison Silberberg and Walker.

“We don’t have a consensus on what kind of Alexandria we all want to live in together,” said Peabody during a recent debate. “And I think we need to have that conversation.”

In many ways, the Democratic primary has become a conversation about the scale of development in the city. Candidates that have approved of recent development decisions include the two current incumbents Councilwoman Del Pepper and Councilman Paul Smedberg as well as the two former incumbents, Tim Lovain and Justin Wilson. Several first-time candidates have also come out in favor of the direction taken by council members in recent years, including Melissa Feld, Fossum and Holihan.