‘Ode to Joy’ in McLean
Votes

‘Ode to Joy’ in McLean 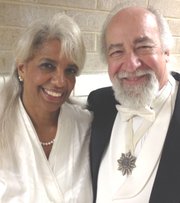 In its 2011–2012 Season Finale concert on Saturday, June 2, The McLean Symphony (TMS) premiered a new composition, presented a suite of much-loved arias, and performed Beethoven’s Symphony No. 9, 4th movement known as the "Choral," recognized for its powerful "Ode to Joy" theme. This concert marked completion of a year-long celebration of 40 consecutive years of making music in the greater DC area under the baton of music director Dingwall Fleary. Already looking toward another decade, Maestro Fleary and the Symphony have performed throughout the greater DC area in addition to the regular concert series in McLean.

In a program recognizing the human voice as "The First Instrument," the concert included more than fifty voices with the McLean Symphony Festival Singers, prepared by Felicia Kessel Crawley. In addition to the Festival Singers, The McLean Symphony was joined by four professional soloists, each of whom has previously performed with the orchestra and Maestro Fleary. Soprano Joyce Lundy, mezzo soprano Valerie Kehembe Eichelberger, tenor Antonio Giuliano and baritone William Powers sang the key soloist roles of the "Ode to Joy," in addition to each being featured in a much-loved operatic aria by Puccini, Mozart or Bizet. The concert was introduced by television journalist Roger Mudd, a longtime friend of The McLean Symphony.

Two instrumental works opened the program. The first was the premiere of the last of "Four Fanfares for Forty," written by composer-violist Michael Ream in honor of this special year. The fanfares were commissioned by board member Kevin Rosengren and Mrs. Rosengren. The second was the orchestral blockbuster, "Prelude to ‘Die Meistersingers von Nurnberg’." The McLean Symphony Festival Singers shone in the Madame Butterfly "Humming Chorus" by Puccini, and a duet by Puccini featured soprano Joyce Lundy and tenor Antonio Guiliano. Following solo arias, a Don Giovanni duet by Mozart featured baritone William Powers and marked soprano Krista McClellan’s concert debut with The McLean Symphony.

For the season’s crowning work, The McLean Symphony members swelled to more than 70 instrumentalists. Together with the McLean Symphony Festival Singers and the four featured solo artists, they brought Beethoven’s Symphony No. 9 "Choral" ("Ode to Joy") to the McLean area. This is only the second time in 40 years that Maestro Fleary has presented the "Ode to Joy" in this area; the first time was the celebration of 20 years of conducting classical music in McLean.