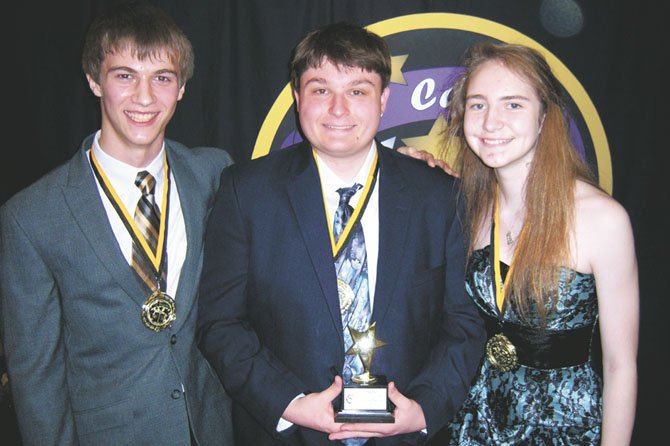 Senior Brian Clarkson accepted the Cappie for Special Effects and Technology. “It feels amazing,” he said. “I was nervous going onstage, though; I’m normally behind the scenes. But this award means that all our hard work paid off.” 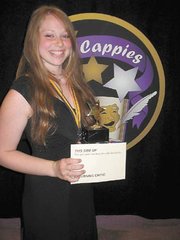 Clarkson said he and his team of Jonathan Kluger and Nikolas Allen “incorporated everything from dry-ice fog to small, flash-pot sparkers on stage to produce the mood of the scene, build suspense and bring everything to life.” Following graduation, Clarkson plans to study aviation at Jacksonville University in Florida to someday become a pilot.

Carroll called their victory incredible. “I’ve been in this field four years, and it’s so unreal,” she said. “We put so much blood, sweat and tears and hard work into it. Alex and I mixed the effects and ran the microphones, and Lindsay put together the soundtrack.”

Representing the Sets award, junior Matthew Lewis said, “It’s amazing. Our production process was so compressed for this show that we were all surprised at how fast we put it together. We rebuilt our set three times in five weeks to get it right.”

But as the set designer and master carpenter, he said the final product was worth it. “It was impressive,” said Lewis. “It had a lot of moving portions, including parts in Frankenstein’s lab that were entirely moved by hand by the stage crew.”

Added Allen: “We worked really hard — especially during ‘Hell Week,’ the week before the show — and we had a great lighting team.”

Accepting the Stage Crew award were juniors James London and Daniel Levine. “I’m proud of the tech crew that worked so closely and so well with us,” said London. Levine said they were lucky to have London as their stage manager because he was such a good leader.

“The tech crew students worked so hard on this show,” added Levine. “And it’s really touching that the Cappies puts such an emphasis on the hard work that goes on backstage.”

Overall, Westfield High won the most Cappies, garnering 10, including Best Musical, for “Crazy for You.” The Best Play winner, McLean High, also took home five awards, including Lead Actor and Lead Actress in a Play, for its production of “A View from the Bridge.”