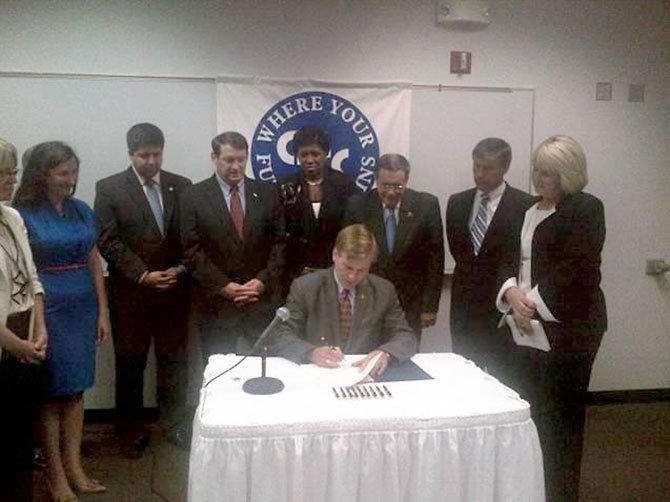 Supervisor Pat Herrity (R-Springfield), who chairs the Governor’s Task Force for Local Government Mandate Review, said the signing marked a milestone in the work of the task force.

"With the full support of Governor McDonnell, we accomplished a great deal in a very short period of time. The success in this session is only the beginning as…the task force begins to address the fundamental challenges of the funding and service delivery relationship between the Commonwealth and localities," Herrity said. "I was also especially pleased to have delivered on mandate relief for the vast majority of mandates identified by Fairfax County on this history-making day."

IN SEPTEMBER 2011, Governor McDonnell announced the creation of the task force. The mission of the five-member task force was to review state mandates imposed on localities and to recommend temporary suspension or permanent repeal of those mandates. In January 2012, the task force completed its work and made recommendations to the General Assembly about mandate changes that could be enacted. The bills signed June 7 are a result of that work.

"I understand the challenge local governments face when trying to balance their budgets and conduct the people’s business during complex financial times and with limited resources. This difficulty is exacerbated when the state places burdensome mandates on localities," McDonnell said during the news conference last week. "I am pleased to ceremonially sign these bills into law to help ease the burden on localities and to streamline mandates so local governments can focus on their core services."

A third of the recommendations dealt with education, including removing the requirement that schools must offer online Standards of Learning (SOL) testing in middle schools.

The task force also set a goal for the Department of Education to reduce "unnecessary" state and federal reporting requirements for Schools by 15 percent, such as abolishing the mandate for annual reports on remediation programs.

OTHER LEGISLATION proposed by the task force includes:

*Removing the mandate for state inspections of erosion and sediment control programs where localities have inspections.

*Eliminating the mandate that requires VDOT approval of the location of locally-placed red light cameras.

*Eliminating the mandate for localities to give first priority for vending contracts to the Department of Blind and Visually Impaired.

Herrity said that by streamlining or eliminating these requirements wherever possible, "we are able to make local governments more efficient and responsive to their citizens.

"The elimination of these 20 mandates is truly historic in that never in the Commonwealth’s history has anywhere near this many mandates been repealed in a single session," Herrity said. "These Bills represent common sense-solutions that will provide fiscal relief to localities and the Commonwealth and will enable both to more efficiently serve Virginia’s residents."

The laws ceremonially signed by Governor McDonnell will go into effect July 1, 2012. The full report from the Task Force for Local Mandate Review is available at: www.governor.virginia.gov/utility/docs/Interim%20Report%201%2016%2012.pdf