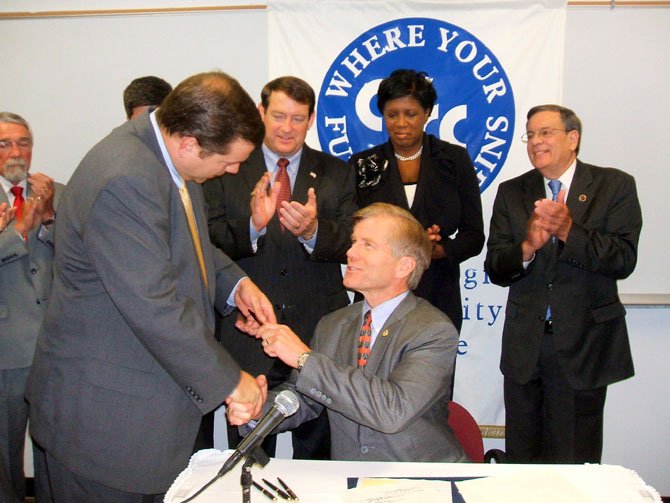 By By Alicia Hughes

Alexandria — On June 7, I joined Gov. Robert F. McDonnell at the Central Virginia Community College in Lynchburg, with others from his Task Force on Local Mandates Review, where he signed several bills that repealed over 20 burdensome mandates on local governments, a true milestone for the Commonwealth of Virginia.

At least an additional 15 to 20 mandates will be reduced or eliminated by executive action or administrative authority this year, pursuant to the Administrative Procedures Act, including a multimillion dollar reduction in the local aid to states legislation that has been heavily relied upon in recent years and passed on to taxpayers at the local level. I am pleased to serve as the task force liaison to the Commission on Government Reform and Restructuring.

From the very beginning, the Task Force zeroed in on ways to identify and make recommendations on state mandates to reduce or eliminate. With an initial meeting of Nov. 7, 2011, we quickly solicited input from local governments, school divisions, interest groups, and the public to identify mandates that are overly burdensome, costly and/or unnecessary and recommend appropriate changes and were able to make preliminary recommendations for about 80 mandates to nix.

Special thanks to the Commission on Government Reform and Restructuring, of which I am also a member, Senator Newmann and Delegate Kathy Byron, who together laid the groundwork for the Task Force’s creation. The elimination of these 20 mandates is truly historic in that never in the Commonwealth's history has anywhere near this many mandates been repealed in a single session.

As a matter of fact, within the last 10 years, the General Assembly has collectively eliminated less than five, while creating far more every year. These bills represent common sense solutions that will provide fiscal relief to localities and the Commonwealth and will enable both to more efficiently serve Virginia's residents. The laws ceremonially signed by Governor McDonnell will go into effect July 1.

Some of the legislation includes HB1295 (Byron)/SB679 (Newman), an omnibus bill that eliminates several statewide mandates on local government and regional government entities; HB96 (Wilt), extending the delay of the implementation of statutes and regulations upon which the accreditation of schools in the Commonwealth is based that were not already in effect on June 30, 2008; HB869 (Rust)/SB 274 (Smith) Urban Development Areas, making incorporation of urban development areas optional rather than mandatory, relief desperately sought by many poor and rural localities; HB914 (Minchew), allowing counties and towns, pursuant to an agreement with the Commissioner of Highways, to install "Children at play" signs on highways within their boundaries; HB1216 (D. Bell), providing that when a proposed amendment to the zoning ordinance involves a tract of land of not less than 500 acres owned by the Commonwealth or by the federal government, and when the proposed change affects only a portion of the larger tract, notice need be given only to the owners of those properties that are adjacent to the affected area of the larger tract; SB676 (Garrett), requiring solid waste planning units or localities with a population of greater than 90,000 to submit a recycling report annually and requires those units or localities with a population of 90,000 or less to submit the report only once every four years; and HB579 (Helsel) providing that applications for public assistance may be made electronically.