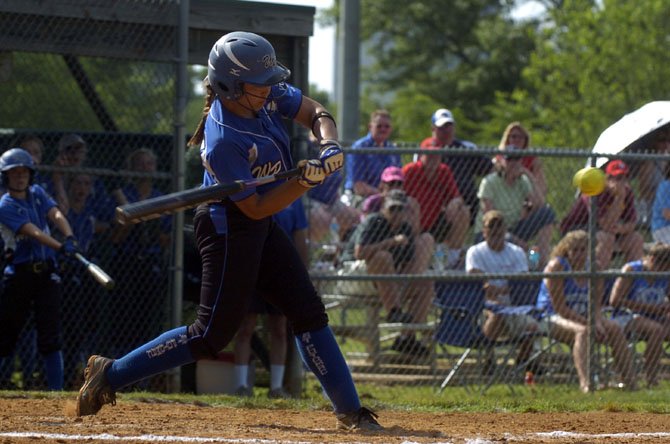 Vienna — Morgan Maniglia’s voice quivered with excitement as she answered postgame questions after hitting a game-winning home run against Chantilly in the region softball quarterfinals. Two days later, the West Potomac senior’s voice shook with frustration after the Wolverines lost to Stone Bridge in the semifinals.

The West Potomac softball team’s 2012 season ended with an emotional pair of postseason contests. On May 28, Maniglia’s two-run homer in the 11th inning propelled West Potomac to a 3-1 victory against Chantilly at Falls Church High School and one of the deepest postseason runs in program history. On May 30, the Wolverines got off to a rough start, allowing five first-inning runs to Stone Bridge en route to a 7-0 loss at Madison High School. After two hits, a walk and two West Potomac errors produced three Stone Bridge runs, Bulldogs catcher Olivia Tatara hit a two-run homer to increase the team’s lead to 5-0. Maniglia then hit a batter and issued another walk before head coach Craig Maniglia, her father, came out to the circle for a visit. Morgan Maniglia retired the next two batters, but by then the Wolverines were in too deep of hole.

"I don’t think we were expecting them to be this good — I know I wasn’t," Morgan Maniglia said. "I felt prepared for this game. I don’t know what happened."

"I’m kind of upset," she said. "I didn’t really want it to end like that, but I … [think] this [loss] doesn’t define us at all. We proved a lot this year. I think we seniors especially did what we could to get here. I’m proud of our team, I’m proud of myself, but I’m just kind of frustrated at the outcome of this game."

While Maniglia’s career ended on a sour note, her senior season was a decorated one. She was a standout in the pitcher’s circle and in the batter’s box. According to records kept on the VHSL website, Maniglia’s 10 home runs would put her in a second-place tie for the most home runs in a single season in state history. She was named first-team All-Northern Region and first-team All-Patriot District as a pitcher and was the district Pitcher of the Year. She also made first-team for the district and region tournament teams, and was named second-team All-Met by The Washington Post.

Along with Maniglia, senior catcher Jasmine Picini and senior center fielder Danielle McHugh helped carry the Wolverines throughout the season. Picini, who will play at Alfred University in New York, earned first-team all-region and all-district accolades as a catcher, along with making first-team for the region tournament team. She garnered All-Met honorable mention from The Post.

McHugh, who will play at Tennessee Tech, was a first-team all-region and all-district selection as an outfielder, and received All-Met honorable mention from The Post.

"I’m kind of upset. I didn’t really want it to end like that, but I … [think] this [loss] doesn’t define us at all. We proved a lot this year. I think we seniors especially did what we could to get here. I’m proud of our team, I’m proud of myself, but I’m just kind of frustrated at the outcome of this game."

"How do we rebuild to get here with the three powerhouses that we’ll lose?" Craig Maniglia said was going through his mind after the semifinal loss to Stone Bridge. "That’s tough."

While West Potomac will lose a lot of talent, the Wolverines will have some skilled players returning. Freshman second baseman Nikki Minnis showed she can hit for power despite her small stature. Junior outfielder Sydney Maniglia and junior shortstop Hannah O’Neil each earned second-team all-district honors and Maddy Bolger was a starter in the outfield. Freshman Jayne Orleans could be next season’s starting pitcher.

"I feel like we left a print and we left a pathway for the younger ones to follow," Picini said, "and hopefully they work as hard to get here and go further."

West Potomac finished the season with an 18-7 record.

"I’m extremely happy. I feel like we’ve already won a championship, to be honest," Picini said after the Stone Bridge loss. "… Just to make it here is awesome. I’m a positive thinker, so I take everything positive from it. Don’t be fooled, I’m upset, but I think it’s incredible that we got here. We’re the underdogs and we made it here, so I’m happy with that."