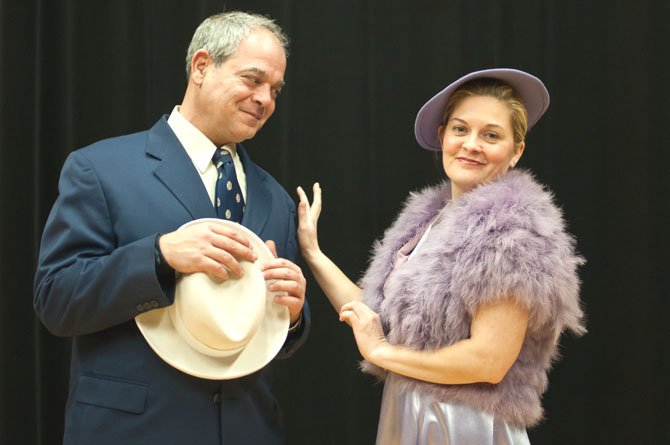 The appeal of Christie's work can be summed up by director Danny Tippett: "Agatha Christie has a way of writing that keeps you interested. The characters are well rounded and she keeps you guessing right up until the end. This is a really interesting show with lots of twists and turns. This play does not have her usual hero Hercule Poirot in it, so you can get attached to other characters in the play."

Bill Byrnes who plays a cleric, Canon Pennefather, agrees. Unlike Christie's detective Poirot, Canon Pennefather finds himself personally involved in the action. Byrnes feels his character is "concerned about the soul of the murderer. He has a more emotional involvement besides just an average detective hero. It gives an added layer to this play.

The Canon is personally involved in the action and even finds himself to be a suspect. This is a character you are not so sure about. He is unproved and not as sure as a detective. Audiences love a good mystery thriller and this is one of the very best. Even if you figure it out you want to see the aspect of the chase and how we will corner them."

Behzad Dabiri (Steward/McNaught) enjoys the murder mystery genre because the story "is constantly making you guess who did what and who would have a reason to do murder. The plot is constantly making people guess and they are mostly wrong about what they are thinking. What is beautiful about this play is that it keeps you guessing the whole time."

There is quite a cast of characters aboard the ship. The actors enjoyed finding out their character's history and motivations. Erin Gallalee (Jaqueline De Serverac) reveals "all the characters in this play have a history and a journey. In most murder mysteries the characters are one dimensional, but these characters are very well developed have many layers and several sides to them. There are lots of 'Oh and Ahh' moments."

Carole Steele plays Ms. Helen Ffoliot Ffoulkes who "takes everything to the extreme. She is elitist, doesn't like foreigners, or people she feels are below her. She is a prissy, brittle English spinster type. She is the comic relief in the play. I think the appeal of Agatha Christie's work is that she builds wonderful characters. It is interesting to see people in mysterious and exotic situations."

Joe Bissex (Smith) found it challenging to create a balance of "goofiness and seriousness in my character. He plays the fool a lot but has a sincere heart and is not shallow."

For this production the actors had to master British, French or other European accents. Charlene Sloan plays Kay Ridgeway-Mostyn, the wealthiest girl in England. "She is polite to fault, pretentious, and snobbish. She has always had everything given to her, so it is interesting to see how she unravels when challenged. To practice her accent I watched Dr. Who on BBC to look for guidance."

As an actor, Bethany Stiller (Miss Christina Grant) has enjoyed the teamwork and camaraderie of being in the cast. "This play was so much fun to do. It is so well written. There are so many intricate, creative things that Agatha Christie threw in there. She doesn't do anything haphazardly. She builds the suspense and doesn't let up and I think that is why most people enjoy it. Being in ‘Murder on the Nile’ was an absolutely amazing experience. It builds a sense of community and let's people celebrate the performing arts together."

Brian Lingenfelter (Dr. Bessner) feels Agatha Christie stories "help you get into the mind of someone who has sinister thoughts. It is a look into the dark side. I hope people will come and enjoy the show and appreciate what we are doing. Community theater is great entertainment and you don't have to spend a fortune on seeing a show."