Col. Maggie A. DeBoard sworn in as chief of police. 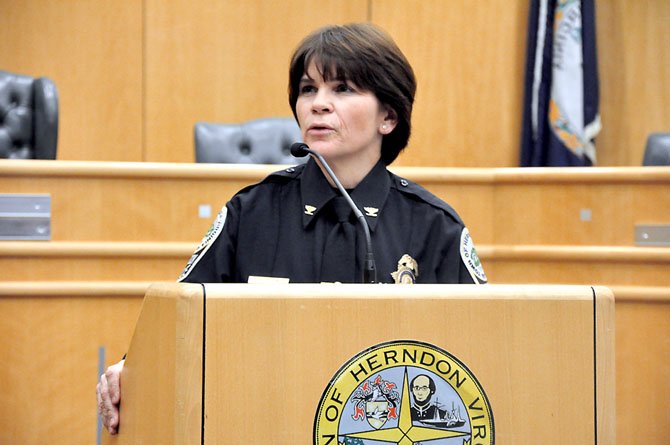 Col. Maggie A. DeBoard, Chief of the Town of Herndon Police Department, addresses town residents and staff after being sworn in Tuesday, March 6. Photo by Alex McVeigh.

Herndon — The Town of Herndon welcomed Col. Maggie A. DeBoard as chief of police Tuesday, March 6, when she was officially sworn in at the Ingram Council Chambers. DeBoard, a 25-year veteran of the Fairfax County Police Department, has previously served as captain of the Franconia District Station, commander of the county’s helicopter division, commander of the Special Operations division and deputy chief of investigations.

DeBoard’s wide range of experiences was one of the highlights considered by the town’s selection committee when looking for a new chief. 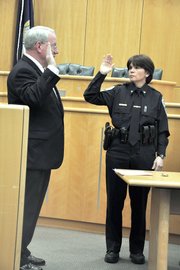 "My first thought was ‘what hasn’t she done?’ when looking at her vast experience she’s had in her career and the knowledge and expertise she brings," said Town Manager Art Anselene. "Chief DeBoard has been described as not only being honest, but ‘brutally honest.’ She’s known for being collaborative and open to reason and alternatives."

Anselene said in speaking with DeBoard’s previous supervisors, they noted that she maintained her connection with the officers on the street, she had not lost that quality as she rose through the ranks.

Mayor Steve DeBenedittis said he was equally impressed when he saw the depth and breadth of DeBoard’s career.

"In reviewing her experience, I feel confident that she can provide the leadership and management to this department and further the safety of the community," he said. "It’s clear that given Col. DeBoard’s extensive experience in local law enforcement and her dedicated involvement in the community she is an excellent fit for the Town of Herndon."

DeBoard was sworn in by John T. Frey, clerk of the Fairfax County Circuit Court.

DeBoard said before being hired she wasn’t looking for a new job, but once she heard of the opening in Herndon she decided it might be a good opportunity.

"This town comes with an excellent reputation," she said. "I’ve done my homework and talked to a lot of people, and I never heard a negative word about the officers, town and community of Herndon."

She acknowledged the comments from her previous supervisors, saying that maintaining a connection with the patrol officers has always been a goal.

"When I started as a police officer, I never imagined being a chief. I never had an aspiration to be a chief of a supervisor, I wanted to be a cop," she said. "That’s still what I want to do, and I feel like Herndon gives me an opportunity to get back to my roots a little bit, but still provide that high level of leadership that I have developed over the years."

As a cyclist, DeBoard said her knowledge of Herndon is limited to the W and OD Trail, but she says she is eager to get into a police car and learn the ins and outs of the town as seen by the community and the other officers in the town.

"I really hope to maintain my community policing approach," she said. "I won’t always do the right thing in some people’s eyes, but the one thing I can assure you is that I will always have the right intention with what I’m doing. Any mistakes we make along the way we’ll fix and move forward, but you will always find me with the best interests of the public in mind."