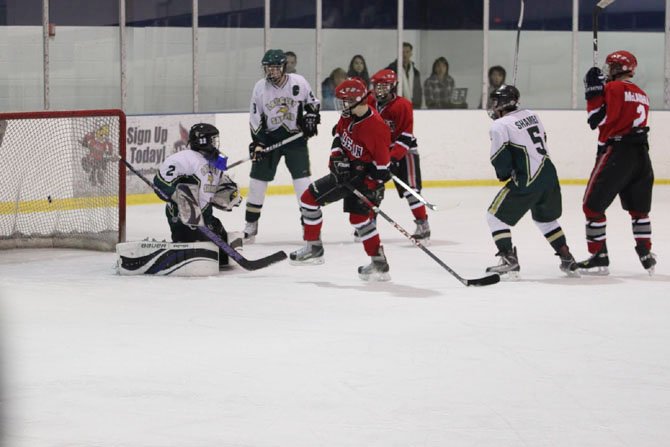 Over the years, the McLean and Langley squads have squared off in Northern Virginia Scholastic Hockey League action. Two weeks ago, the two teams met in a postseason game with Langley prevailing. Staff Photo

Kevin Diner scored twice and Evan Sterling had a goal and three assists as Langley High School posted a 6-1 upset win over McLean in the recent quarterfinal round game of the Northern Virginia Scholastic Hockey League (NVSHL) playoffs at SkateQuest Reston.

With the victory, Langley advanced to the semifinals where they lost a close game to Stone Bridge High at the Ashburn Ice House.

The annals of cross-town rivals Langley and McLean ice hockey have produced several unusual scenarios over the years, and the quarterfinals round playoff game added yet another chapter to that legacy.

Down 1-0 on an early goal by Diner, McLean captain Nick Baker had to step into his team’s goalie position after the McLean starting goalie left the game on a penalty. Baker was valiant and blocked several Langley scoring bids, including a rocket slap shot with his glove, during the final five minutes of the opening period. Paul Forest eventually took over the goalie duties for McLean to start the second period with Langley ahead, 3-0.

McLean played with heart, determination and passion but it wasn’t enough. Forest, who played goalie in youth hockey 10 years prior, made several spectacular saves. But Langley players Atte Happonen and Drew Schneider finally broke through in the last three minutes of the period to essentially put the game out of reach. Grady Payne scored a late goal for McLean but Sterling answered 45 second later and the Saxons were on their way to the semifinals.

“It was an unusual game, what with the goalie getting that penalty, but once the second period started, both teams settled down and it was a good, two-way game,” said Langley coach Rob Faktorow.

Indeed, both teams had ample scoring opportunities with Langley goalie Ryan Framinan looming large on several McLean shots, particularly in the second period when a Highlander comeback was still a possibility.

Two nights following the win over McLean, the Langley hockey squad, in a fast-paced Wednesday thriller in Ashburn, wowed its fans by nearly defeating the defending champion Stone Bridge Bulldogs.

The Saxons were outshooting Stone Bridge throughout the first period of the NVSHL semifinal game and jumped out in front on a goal by Evan Sterling. The second period saw three goals by each team in back and forth fashion, with Langley’s Kevin Diner netting two scores. The period ended with Langley in front 4-3 and the teams dead even at 21 shots each.

In the third period, Stone Bridge put furious pressure on Langley keeper David Altman, finally edging ahead of Langley in shots on goal. An amazing performance by Altman and a tight Langley defense held Stone Bridge off until Stone Bridge pulled its goalie. Using the extra man advantage, the Bulldogs were able to tie the game with just 51 seconds left.

In overtime, with a first-ever trip to the finals on the line, Langley continued to deliver its best game of the season. Nevertheless, with only three minutes left, Stone Bridge was able to overpower the tiring Saxon squad, claiming the 5-4 win and advancing to the NVSHL championship game.

EARLIER IN THE POSTSEASON, Langley had been victorious over Bishop O’Connell High (Arlington) in a first round contest, earning the Saxons a berth in the quarterfinals against McLean.

In a Friday night affair, Langley routed O’Connell, 9-2, behind a team-record five goals from Drew Schneider. Also for Langley, Logan Pontell added two goals while Ture Linden and Colin Framinan added one each.

The win enabled the Saxons to move on to play McLean. During the regular season, Langley had lost to McLean - the first time in 10 years that the Saxons had fallen to their local rivals. So, going into the quarterfinals round playoff meeting, Langley was determined to avenge the regular season loss.

“Our players were determined to start a new winning steak,” said Faktorow, the Langley coach.

Langley went on to the decisive playoff win over McLean, placing them into the semifinals round where they saw their successful season end with the loss to the powerful Stone Bridge program.