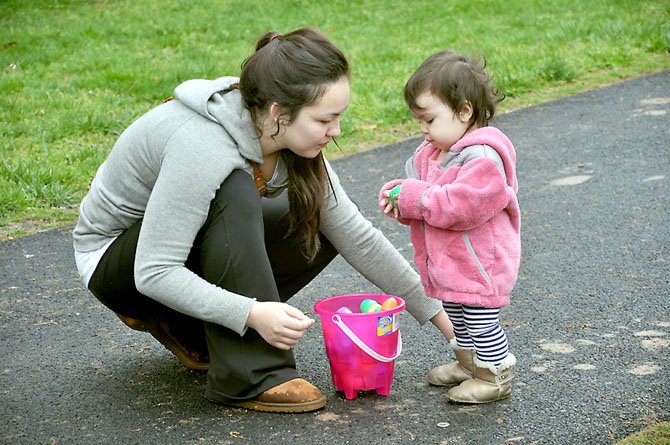 Mary Wheeler of Reston helps her 16-month-old daughter Hailey sort through her egg basket after the conclusion of the Eggnormous Egg Hunt. This year’s hunt will take place Saturday, March 31. Photo by Alex McVeigh.

Reston — Brown’s Chapel Park will be the site of Reston’s annual Eggnormous Egg Hunt Saturday, March 31, which kicks off a Spring brimming with events. The hunt will also feature carnival rides, games and a performance by magician Eric Henning, who has performed around the area including the White House.

"I’m not usually a crowd person, but the egg hunt is an event where it seems like the more the merrier," said Monica Perlo of Reston. "It’s a chance for the kids to see their friends in a setting outside of school, all together, and they can battle over eggs, play games and line up together to meet the Easter Bunny."

While the eggs usually get snapped up quickly, some children just like to play the games.

"It’s fun to look for eggs, but it can be hard with so many people around, and I’m not very fast," said Cristobal Figueroa, 8, of Reston. "But I like playing the games with my mom and dad, and it’s fun to be outside in the warm weather."

Reston is also in the unique position of being able to celebrate its birthday with its founder. Bob Simon will be celebrating his 98th birthday, while the community he founded will turn 48.

"One of the coolest parts about living in Reston is, almost anytime during the year, being able to walk around Lake Anne and seeing Bob Simon walking, the man who founded this place with such a focused, admirable vision," said Thomas Edwards of Reston. "The annual birthday celebration is just icing on the cake."

This will be the second year that Founder’s Day festivities will feature the Treasure Hunt, a two-hour quest that requires participants to visit 10 locations unique to Reston.

"Last year was a bit of a challenge, I started the hunt, but it became a little much for me," said Amelia Jones of Reston. "But when I told my kids, fans of ‘The Amazing Race’ that their mom didn’t make it to the finish line, they sure let me hear about it, so I’m aiming to do the whole thing this year."

All finishers will be awarded a prize this year and there will be a drawing for a grand prize.