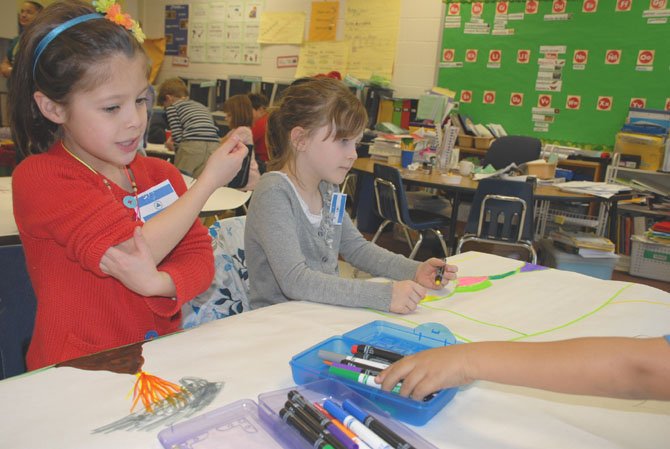 During a class party to celebrate Bachelet’s return from Nicaragua, Raquel Davis (left) drew a picture of a volcano like the twin volcanoes on Ometepe Island in Nicaragua where Bachelet traveled to in February. Grace Morgan, seated next to Davis, said that the bird she was assigned was the northern parula warbler. Photo by Amiee Freeman. 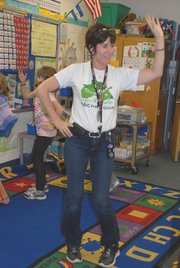 Second grade Lake Anne Spanish Immersion teacher, Consuelo Bachelet, traveled to Nicaragua in February as part of the Smithsonian Migratory Bird Center’s Bridging the Americas Program to learn more about the birds that migrate between the eastern United States and Nicaragua. Here, Bachelet encourages her students to get up and dance.

This February, second grade Lake Anne Elementary teacher, Consuelo Bachelet, traveled to Nicaragua for ten days as part of the Smithsonian Migratory Bird Center’s Bridging the Americas Program to learn more about these migratory birds and help raise awareness about their plight.

Bachelet, a teacher in Lake Anne’s Spanish Immersion Program, is a native of Chile. When she moved to the Northern Virginia region nine years ago, she did not know much about the birds of this area.

"I put out a bird feeder and I watched the birds. They were different from the birds I knew and I wanted to learn more about them. I even had my family learning about the birds with me. One year for Mother’s Day, I received a pair of binoculars, I was so interested in these birds," said Bachelet.

ABOUT FIVE YEARS AGO, a flyer arrived in teachers’ mailboxes about the Smithsonian’s Migratory Bird Center Bridging the Americas Program. Bachelet’s growing interest in birds and her hope that she would gain material for the classroom led her to participate. She began attending Smithsonian-sponsored bird watching activities in Rock Creek Park in Washington and informational sessions on weekends and during summer break. Then this fall she and Christine Payack, a second grade teacher at Fairhill Elementary in Fairfax, were selected by the Smithsonian to travel to Nicaragua.

"I was really lucky," said Bachelet.

Prior to her trip, Bachelet introduced her class to the migratory birds. Each student was given a bird to learn about and to draw. These drawings and letters were sent to students in Nicaragua. The students also played a migrating game to simulate the arduous journey the birds take twice a year.

Located on the western side of Lake Nicaragua, Ometepe Island is formed in the shape of an irregular figure eight with volcanos rising from the center of each circle. The name Ometepe, according to Bachelet, means land between two hills. Ranching is the main occupation on the island. Due to the natural beauty of the island, there has been recent interest in eco-tourism.

During her visit, Bachelet visited 20 classrooms at five different schools to deliver artwork and letters produced by her students at Lake Anne and school materials donated by Lake Anne families.

Bachelet said that there was a general question as to whether the lessons about migratory birds resonated with the students. However, she said that teachers there were seeing real responses to the lessons. It is common for birds to be shot out of the trees with slingshots for sport or for food. Bachelet said that she learned from the teachers on Ometepe that if students saw someone about to shoot a bird out of the tree they would stop them and tell them about how these birds migrate and their importance.

WITH LOCAL TEACHERS, Bachelet visited a bird banding station run by Fauna and Flora International where they got to see migratory and resident birds up-close.

"Here," meaning in Virginia, said Bachelet, "the birds sing a lot. But because of the dense foliage in the summer, they are hard to see. When we were there, they were very easy to see. They come north to find a mate. Then in the winter they go back to the same forest, to the same tree even."

Bachelet was also able to Skype with students at Lake Anne.

"The connection was not great," said Bachelet, "but it was an excellent experience. For our students that type of activity is almost natural. But for the students there it was a wonder. I wondered what they were thinking as they talked with these students so far away."

"We could not have sent a better teacher than Señora Bachelet," said Lake Anne Principal Brendan Menuey. "Here was a teacher who was engaged in a learning activity in a Spanish speaking country. She was not there just for fun, not for vacation, it was a real learning opportunity. These are the types of things kids remember in high school. Plus, this activity meshes so well with what we are doing here at Lake Anne: it includes lessons about wildlife, global awareness, and Spanish. We could not have selected a better project than this. It makes learning real."