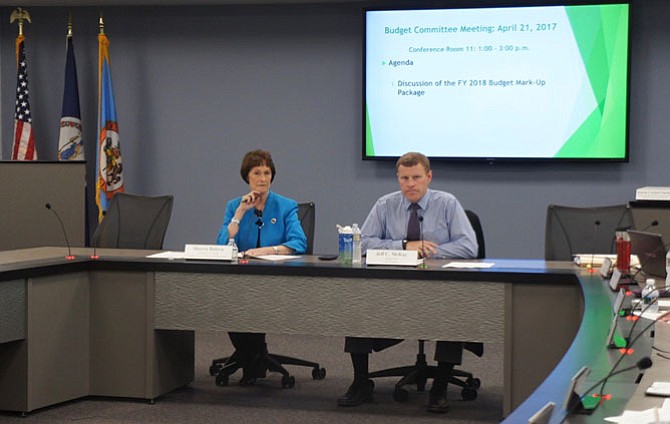 Fairfax County Board Chairman Sharon Bulova and Budget Committee Chair Supervisor Jeff McKay (D-Lee) get ready to work through the issues at the last Budget Committee meeting before the Advertised FY 2018 Budget goes to Mark-Up. Photo by Andrea Worker.

The FY 2017 Third Quarter Review yielded a balance of $403,407. Based on feedback from the community, the advertised decision is to restore funding in the amount of $150,000 to the Insight Memory Care Center for one year in FY 2018. The program contract had been scheduled to be reduced by 50 percent. The remaining balance of $237,526 after Revenue Stabilization and Managed Reserve Adjustments, is available for one-time spending requirements in the next fiscal year.

As part of the Budget Mark-Up process, Add-On Adjustments, combined with the balance from the FY 2018 Advertised Budget, totalled $3,678,055 after the subtraction of funds to Circuit Court Clerk for a new judge. The monies that comprise the balance come from additional state revenues, the elimination of funding for the Infill Tree Sign Program, excess Mosaic revenue, a new $5 Circuit Court fee for paper-filed documents and savings from other areas.

THE COMMITTEE then made recommended adjustments utilizing the advertised balance.

If ultimately approved by the board, the balance makes it possible to partially fund the next phase of the Diversion First Program which had seen no additional funds in the new Advertised Budget. Phase 2 of Diversion First calls for funding of more than $5 million, but with only a small balance available to the board, those funds were reduced to $1.9 million. The program will still be able to add 18 new positions to continue diverting those with mental illnesses towards treatment instead of entering them into the judicial system, or jail, if their offenses are relatively low-level.

The Community Readiness and Support Program (CRSP) would also receive a reprieve if the recommended adjustments are officially accepted in the FY 2018 Budget. This outpatient day program serves a small, but vulnerable population who suffer from a variety of mental and developmental issues, often complicated by drug or alcohol abuse.

The program is viewed as special in the county by many of its clients and by other mental health care professionals because of the small staff-to-client ratio, with a nurse on site, and a more structured setting and program that allows participants to improve and often avoid future hospitalizations or worse. CRSP was originally slated to close as of June, and the clients and their families had been informed. A large contingent in support of the program added their testimonies during the Budget Public Hearings.

FAIRFAX COUNTY PUBLIC SCHOOLS will also benefit from the recommendations, with just over $1.7 million in additional support, lessening the shortfall gap from the FCPS’s budget request from about $60 million, to $48.4 million. Both McKay and Board Chairman Sharon Bulova pointed out that the recommendations for the disbursement of these funds for the most part followed the formula applied to the original Advertised Budget, with the school system still receiving 52.8 percent of the General Fund disbursements.

With the adjustments and recommendations, Fairfax County would be approving a balanced budget for FY 2018, but be facing a shortfall of an estimated $95.7 million from the start.

Other fee adjustments and taxes in the budget include:

If approved, these tax and fee increases become effective on and after July 1, 2017 unless otherwise noted.

Most of the supervisors’ comments and requests for further discussion occurred during the Budget Guidance for FY 2018 and FY 2019 portion of the meeting.

There was general agreement that the County Board and the School Board needed to build on their growing cooperation and joint efforts to tackle financial issues. An example was provided, where at the upcoming Public Safety Committee meeting in June, both boards will have the opportunity to discuss the impact of gang violence in the community. Supervisor Pat Herrity (R-Springfield) suggested that combating the opioid abuse crisis be another issue on which the boards combine their efforts.

Disagreement surfaced when the topic turned to Employee Pay and Employee Pensions of county employees. Supervisors Herrity and Penny Gross (D-Mason) took opposing stances, with Herrity saying that the two items should be considered together as part of total “employee compensation” rather than “in silos” and Gross was of the opinion that they are obviously part of a whole, but separate factors needing separate consideration. Everyone agreed that any changes that might ultimately be made should not affect current employees or break any promises that have been made.

It was agreed to leave further in-depth discussion for the upcoming Personnel Committee meeting in June, but both Supervisor John Cook (R-Braddock) and Supervisor Dan Storck (D-Mount Vernon) requested that the county executive come back to the board with actual figures.

“Give us the real numbers on the Pension Plans,” asked Cook.

“We need to monetize employee benefits in order to make a plan,” said Storck.

Five-year, fiscally-restrained plans were requested by the board for implementation of the recommendations from the Ad-Hoc Commission on Police Use of Force, as well as priority funding to address the issues identified in last year’s Human Service Systems Needs Assessment. In addition, the county executive was tasked with revising the current five-year plan for the Public Safety Staffing Plan.

Budget Guidance for Uniformed Police Pay and Staffing has been included as part of the FY 2019 Advertised Budget, and the county executive directed to “utilize updated market data to determine appropriate pay grades for Police positions and to included the necessary funding to continue implementation.”

Virginia voters approved a constitutional amendment in November’s elections that would allow localities the option to grant real estate tax relief for the surviving spouses of first responders killed in the line of duty. Budget Guidance calls for staff to present to the board a proposal to pursue implementation of this change, in time for a possible Jan. 1, 2018 effective date.

AMONG THE REMAINING ITEMS considered under Budget Guidance, Metro funding generated the most debate and the most number of supervisors and staff weighing in on the situation. “It is anticipated that FY 2019 and future years will require significant increases in county contributions which are not sustainable with existing revenue resources,” reads the Budget Guidance statement on Metro.

With potential changes to funding from the federal government, and the acknowledgement that the issue requires regional action with an increased leadership stance by the county, the subject was eventually closed, with staff charged with monitoring the situation, participating in regional discussions on funding, and to keep the board informed for the development of funding options.

The last agenda item was a review of the FY 2018-FY 2022 Capital Improvement Program (CIP), which included considering the establishment of a CIP section that identifies and supports ongoing major maintenance of all county infrastructure, and considering raising the annual bond sale limits above $275 million to help support the program, while still ensuring that the County’s Triple-A Bond Rating is protected.

The next step will be the Budget Mark-Up on April 25. The board is scheduled to vote on the final Budget on May 2, with time made available for public comment at that meeting.

Fairfax County committee meetings and board meetings are open to the public and streamed live via Channel 16 on the County’s website at www.fairfaxcounty.gov, where residents will also find copies of the Advertised Budget, Budget Guidance and related documents.