A Service Dog for Saij
Votes

A Service Dog for Saij 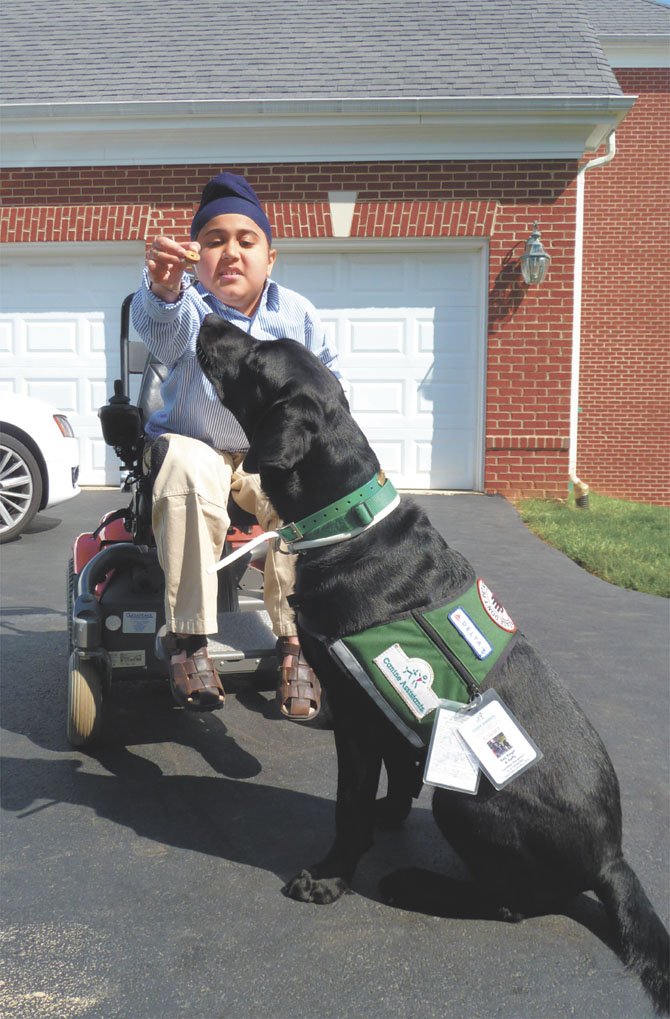 Potomac — Saij Singh’s service dog, a black lab named Saffy became his new best friend just a few months ago. Saffy (short for Sapphire) wakes him up every morning with kisses and cuddles. She turns on lights, opens doors and watches over him. She even picks up his Wii game remote and returns it to his lap. When he arrives home from school, she bounds toward the bus with her tail wagging, ready to greet him with excited leaps and playful barking — but she is also aware that it is time for her job to begin.

Saij was stricken with Duchenne Muscular Dystrophy (DMD) at the age of six. By the age of nine, he required a wheel chair for his mobility. After reading about the service dog program and training, Saij’s mom, Vicky, decided to apply for a service dog for him. They were fortunate that within the year, they received notification that Saij qualified and they were invited to two -week training in Atlanta. That’s when Saij met his best friend – and because of Saffy, his life changed for the better.

Saffy was trained by an organization named Canine Assistants. Founded by MS patient Jennifer Arnold, Canine Assistants has placed more than 1,000 dogs with physically disabled and special needs children and adults. Arnold‘s father, a physician, founded the organization when he realized that his daughter felt isolated and alone because she was in a wheelchair — and there was a long list for service dogs. Her father’s life was cut short just three weeks after he started the training program when he was killed by a drunk driver — but Arnold and her mother persisted and founded Canine Assistants in 1991.

Arnold explains her understanding of the feelings of children who are in wheelchairs because she has been there herself. “I understand the little boy with muscular dystrophy who won't go to school in his wheelchair because he feels different from the other children. I understand the terror of the young man, a quadriplegic from a diving accident, who must spend hours alone in his home because insurance won't pay for a full time attendant. I understand the urgency in the voice of the young girl who has cerebral palsy when she begs us to hurry and train a dog for her because she doesn't want to be alone anymore.” Arnold is author of a best-selling book “Through a Dog’s Eyes.”

Saij now arises confident and in a good mood because he has a friend to share his day with. “I like to play ball with her and cuddle with her. She wakes me up in the morning by licking my ear. I really love taking her to the movies.” His mother said that Saij “now has more self-confidence and the determination that he can do anything. He also feels wonderful because he has the unconditional love of a pet who is also his helpmate and best friend. Saffy provides a kind of companionship that Saij never before had. Saffy has changed our family’s lives for the better.”

The Canine Assistants program puts Saffy and other service dogs like him through a rigorous 1 and a half years of training. The dogs are free and Canine Assistants covers all the costs of training, feeding and medical care for the life of the dog. Since this is a private non-profit, and each dog’s benefits run as much as $20,000 per year, they must fund-raise and seek donations. Actress Julia Roberts supports three service dogs each year. This organization has 1,600 people on their waiting list for a dog — and they can only train and place 75 – 100 dogs annually.

Because her son has benefited so significantly from having Saffy, Vicky Singh is planning a “Service Dog Awareness Day” at the Potomac Village Starbucks in May. She is inspired by a program which she is taking through Landmark Education in Alexandria, Va. to “get in touch with what’s important at life.” The class is called “Self-Expression and Leadership,” and each student is encouraged to initiate a community project which will “make a difference.” On this day, her family will introduce Saffy to the Potomac community and demonstrate how valuable a service dog is to a physically handicapped or special needs child or adult — and how a service dog can change lives. Another objective is to take away the mystery about service dogs. She hopes to raise funds for service dog training through a raffle and donations. She is also working to schedule this event at other restaurant locations.†

If readers would like to find out more about this organization, serve as a volunteer or make a donation, go to www.canineassistants.org.