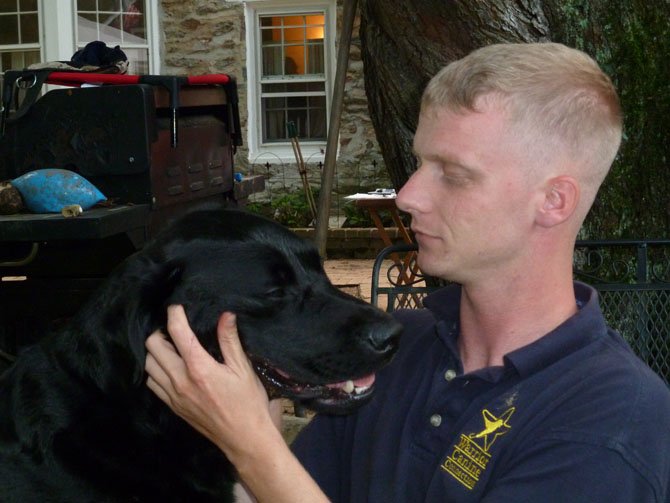 Deb Weber of Weber’s Pet Supermarket in Herndon wants everyone to “Send in the dirty dogs.”

Her mission is to help non-profits raise funds—the pet supply store has built three state-of-the-art stainless steel self-service pet bath tubs and thus, during inclement weather, pet owners can scrub their favorite furry friend. The cost per bath is $16—and Weber donates $10 from each bath to help charities with their mission. Warrior Canine Connection will be the charity receiving the funds generated from the pet baths from Dec. 17 through Jan. 5.

“I like helping the soldiers,” Weber said. “As my mom put it, ‘Charity begins at home.’ Some of the local groups/non-profit that have benefited from Weber's/Fox Mill—Dog Wash Fundraising Program are Guiding Eyes for the Blind, Ragged Mountain Dog Rescue, Mutt Love Dog Rescue, Homeless Animal Rescue Team (HART), Friends of Homeless Animals (FOHA), 4-H Dog Club, SPCA of Northern Virginia, I Pink I Can—Komen Fundraiser, Joshua's Smile 5K (Danny Did Foundation—Sudden Unexpected Death in Epilepsy research), and Bark for Life (American Cancer Society). I have been involved in the Guide Dogs for the Blind program and, like that organization, this is such a meaningful cause. We try to always support local charities.”

Every two to three weeks the charity changes. Some charities solicit members and friends to stop by with their pets, others bring in volunteers to wash the dogs as well as clip nails. “It’s whatever the organization wants to do. We are just happy to help our community,” she said. “Charities have done quite well with networking, emails and through word-of-mouth—they have raised between $400-$1,000.”

Warrior Canine Connection is part of the National Intrepid Center of Excellence at Walter Reed National Military Medical Center, a state-of-the-art facility dedicated to the diagnosis, clinical care and research of traumatic brain injury as well as to the psychological conditions that affect service members and their families. Therapists at the center have discovered that teaching service members and veterans with combat stress to train service dogs for their fellow wounded warriors has shown promise as being therapeutic and healing for the warrior-trainers.

Before Marine Sgt. Jon Gordon became involved in training service dogs for his fellow wounded warriors, he slept little more than five hours a week. He seldom spoke with anyone and rarely left his home except for treatment sessions. He had been kicked out of group therapy sessions time after time, and was unable to participate in his young daughter’s life. His post traumatic stress disorder, traumatic brain injury and constant headaches had changed him from confident young Marine to an angry introvert who wanted only to be left alone.

Gordon was injured three times while serving in Iraq and Afghanistan; he returned to the U.S. in pain, depressed and suffering from anxiety. He yearned to move to Michigan to find employment and live with his daughter—but he was not able to leave Walter Reed National Military Medical Center for an independent life.

In 2001, social worker Rick Yount initiated a program teaching troubled teenagers to train service dogs in Morgantown, W.Va.—a program that helped his non-motivated high school population. The award-winning Golden Rule Assistance Dog program helped the young adults develop their social and emotional skills. The relationship created with their dogs brought them comfort and happiness and helped them to feel more secure in their dysfunctional worlds. Yount observed that the GRAD program was highly beneficial in turning the youths around.

One day, he was struck with an “aha” moment that would change his life—and the lives of wounded warriors.

Two of the dogs trained at GRAD by his students were presented to wounded veterans. “That’s when I decided that it would make perfect sense to teach wounded warriors to train service dogs for other wounded warriors,” said Yount. “It would be a safe, effective non-pharmaceutical intervention to treat the symptoms of PTSD.”

In 2008, Yount initiated the first warrior service dog-training program to address PTSD and TBI in veterans and service members who are in treatment. He currently serves as the executive director of Warrior Canine Connection, a 501(c)3 non-profit organization established for “helping to bring the healing power of the best dogs to our heroes.”

Now, dozens of wounded warriors have become involved in training service dogs as a part of the Warrior Canine Connection program at the “Healing Quarters” located in a historic stone farm house in Brookeville, Md. where Yount and his wife Molly Morelli reside. The woodland setting provides wounded warriors with a peaceful site where they can work with the dogs as well as have a refuge where they can heal.

“Training a service dog takes many of the skills that are needed to be successful in life,” said Yount. “It requires patience, assertiveness, positive reinforcement, kindness, consistency, communication skills, love, responsibility, and an attitude of never giving up or giving in.”

THE PROGRAM is part of the National Intrepid Center of Excellence at Walter Reed National Military Medical Center, a state-of-the-art facility dedicated to the diagnosis, clinical care and research of traumatic brain injury as well as to the psychological conditions that affect service members and their families. Therapists at the center have discovered that teaching service members and veterans with combat stress to train service dogs for their fellow wounded warriors has shown promise as being therapeutic and healing for the warrior-trainers.

“The most important benefit is the connection between the service member and the dog in training—as well as the sense of value that he or she gains from contributing to the well-being of another wounded warrior,” said Yount.

Meg Daley Olmert, author of “Made For Each Other: The Biology of the Human-Animal Bond,” notes the chemistry humans and animals can trigger in each other that creates the sense of attachment they feel for each other which creates a sense of well-being.

Olmert, also the Warrior Canine Connection’s director of research and development, said, “Soldiers who work with dogs have lower anxiety levels and less stress. Studies have shown that nurturing contact helps release oxytocin, a hormone essential to social bonding. Research has also shown that oxytocin is a powerful anti-stress agent. So when I see soldiers hugging their dogs, getting face-to-face with them and sharing the joy of being together—I know I’m seeing a powerful, soothing release of oxytocin.”

Olmert and Yount are working with the National Intrepid Center of Excellence and Walter Reed to design studies that will measure the therapeutic effects experienced every day by the program’s warrior-trainers. Their goal is to prove the healing power of the program and establish it as an evidence-based therapy for PTSD.

Service dogs are beneficial to veterans in a myriad of ways. Their dogs help them remove shoes and socks, retrieve food and drinks from refrigerators, turn lights on and off, pull their wheelchair, assist them with anxiety when they are triggered by sights, sounds, smells or crowded areas and more. They also help them become more social—the dog serves as a social lubricant and buffer between the wounded warrior and the public.

DURING THE FIRST WEEK of the initial pilot program at the VA, Yount noticed a Marine sitting by himself looking sullen and depressed.

“Will you help me train service dogs to help other veterans? I could really use your help,” Yount asked.

After some thought, the Marine replied, “I guess I can help, but I don’t know anything about training dogs.” The following day, a therapist asked the Marine if he liked working with the dog. The Marine responded, “Now I have a reason to get up in the morning.”

Gordon has stepped up to help his fellow wounded warriors. He is now an intern at the National Intrepid Center of Excellence in the service dog-training program. Warrior Canine Connection’s black Labrador retriever, Birdie, has become his training project. When Birdie started spending the night with Gordon, the combat veteran was finally able to sleep more than six hours a night without nightmares—different from his former sleep habits of five hours per week.

“I taught Birdie to accept noises such as sirens and loud blasts—noises that used to freak me. He learned to open doors, deal with the unexpected and obey voice commands,” said Gordon. After six months in the training program, Gordon now socializes with others, his demeanor is more positive and his 5-year-old daughter came to stay with him for the summer. “Training a dog is helpful in dealing with my daughter—there is a correlation between the skills that I need for parenting and for training my dog. I learned patience, to always give positive feedback and to use behavior modification techniques. Consistency is important too.”

When he leaves the program, Gordon is planning to study occupational therapy in Michigan and continue training service dogs for fellow veterans.

To become involved in Warrior Canine Connection or to donate, visit www.warriorcanine....

THE SERVICE DOGS are bred by Molly Morelli, Warrior Canine Connection’s dog program director and wife of Rick Yount. She studies pedigrees, confers with select breeders, and observes the gene pool to make certain that every dog meets the criteria for the Warrior Canine Connection breeding program. “Their temperament must be paramount. I cannot take a chance that a dog will have issues. They must be very smart and sensitive to become a service dog,” she said.

This year, she set up a “puppy-cam” to show off six Golden Retriever puppies to the world, to encourage public involvement with Warrior Canine Connection and to recruit puppy petters. The puppy-cam went viral—and puppy- petters flew in from as far away as Wisconsin, Illinois and New York City. One day, 55 people showed up in Brookeville to socialize the puppies.

Mary Anne Holloway came from Springfield, Ill. and Kim Hinz flew in from Wisconsin. “I was an Air Force nurse in Desert Storm,” said Holloway. “I love animals and I needed a way to help our wounded warriors. Petting the puppies, meeting the Younts and talking with the service members training the dogs was so rewarding.”

Morelli teaches the puppies early commands such as sit and down, and then at 6-8 months instructs them to retrieve and to switch lights on and off. “They are taught to do it right,” she said. “I do tell them ‘no’ and expectations are set high. I really work on communicating effectively with them. Treats and praise are the best methods to train a dog. The puppies must learn at least 90 commands before they are ready to be placed as service dogs.”