Group performs ‘Down Memory Lane,’ a look at concerts of the past. 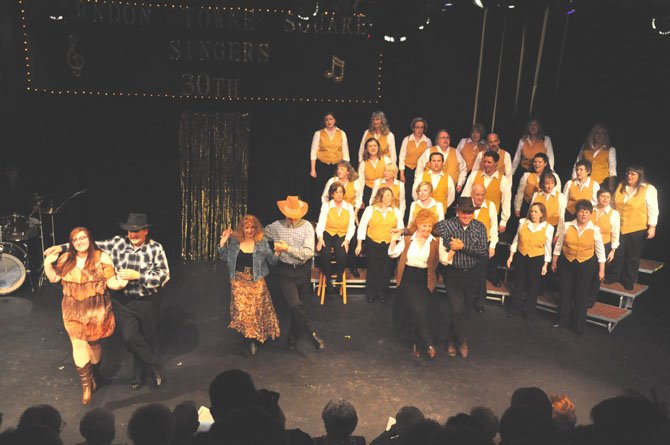 The Towne Square Singers pay tribute to their "100 Years of Broadway" concert at their 30th anniversary concert Saturday, May 5. Photo by Alex McVeigh.

Herndon — When it came time for the Herndon Towne Square Singers to celebrate their 30th anniversary, they knew they wanted to look to the past. The problem was, with three decades worth of shows to pull from, it wasn’t easy. 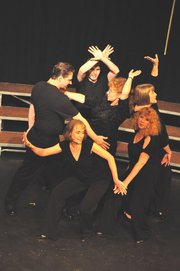 The Town Square Singers Perform "And All That Jazz," from their 1997 jazz, swing and blues concert at their 30th anniversary show Saturday, May 5. The show consisted of selections from performances throughout the group’s three decades.

"We had stacks of music to go through, and it was really hard to choose from so many shows," said Jean Goldsby, founding director of the group. "We wanted to take a trip down memory lane."

"Down Memory Lane" was the title of their anniversary concert, which was held at the Industrial Strength Theatre in Herndon last weekend. Since every show they’ve done since their founding in 1982 has had a theme, the performance consisted of costumes and genres from the past 30 years and beyond.

EVERYTHING from mid-century pop music to musicals, country and jazz was represented.

While they donned gold vests and black slacks to start out, group members wore a variety of other costumes as the show went on. Singers donned flannel shirts and cowboy hats for a few country numbers, and the women donned side caps for a military-themed performance of "Boogie Woogie Bugle Boy."

"That was one of my favorite shows, a ‘USO On Tour’ theme in 1990. We had a Bob Hope-style comic perform, and we acted like every song was performed at a different base," said Director Harlon Reece.

"We ‘toured’ every base that Bob Hope went to during World War II, and we closed with a version of ‘White Christmas’ that was beautiful, and you could see the emotion on the faces of the audience," she said. "

Nancy Lombardi has been a member of the group since the beginning. Her daughter Elena is also a part of the group, and her husband has accompanied the group on drums during a number of shows.

"It’s definitely a family-oriented thing, and I’m not the only one who has multiple members involved with the group," she said. "My personal favorite show was our ‘Rydell High Class of 1959 Reunion’ [in 1999] where we did numbers from ‘Grease’ and I got to play the part of Rizzo, wearing a leather jacket as the bad girl."

The Towne Square Singers, directed by Harlon Reece, perform their 30th anniversary concert Saturday, May 5 at the Industrial Strength Theater in Herndon.

Though they have plenty of veterans, the group still gets new members all the time.

"Singing is something I’ve done all through my youth, and I met Harlon at a Christmas party and heard about the group," said Signe Friedrichs, a new member of the group. "My favorite songs to sing are the jazzier ones, that’s what I grew up on."

Jennifer Winstedt joined in 2008. She has been singing in her church choir for years, and took the opportunity to experience different kinds of music.

"I thought it would be a good chance to branch out from the music I sing at church," she said. "It’s fun because we memorize all our music here, while at church it’s new music every week so we’re reading. This helps me get deeper, more involved in the pieces."

SINCE THEIR FOUNDING, the group has performed several shows per year in Herndon, as well as around the East Coast. They have performed in the Outer Banks in North Carolina and for the USA 400th Anniversary Concert at Ellis Island.