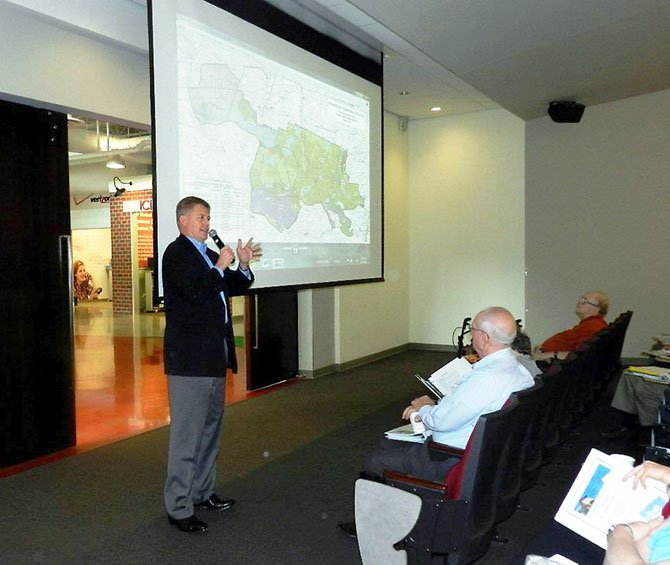 Supervisor John Cook (R-Braddock) gave an overview of the Braddock district to participants during the first Braddock District Citizen Governance Conference at Frost Achievement Finance Park on Saturday, May 5. Hosted by the supervisor, the all-day conference was designed to make participants "decision-makers on the course of Braddock’s future." Photo by Lindsey Smith

All in favor, say aye: Braddock residents John Rephlo and Edie Kasper raised their hands to signal their interest in serving on the newly-formed land use and environmental committee during the first Braddock District Citizen Governance Conference at Frost Achievement Finance Park on Saturday, May 5.

A Duck or Turtle Debate

While the attendees tackled weighty topics with significant implications, they also debated a less vital question: Is the Braddock District shaped like a duck or a turtle?

Most agreed it looked like a duck, but several were adamant it was a turtle.

"We need to strike a balance between land use and the environment, decide where and how much green space we should have," said one woman during the land use session.

"And by the way, it is most definitely a turtle."

Hedetniemi suggested to one participant studying the district map that she blur her eyes to help capture the true shape. "See, this is the wing down here as the duck is flying."

Even Supervisor Cook voted. And his answer was swift and unequivocal. "Duck." No question.

Sitting in a conference room discussing issues such as land use, aging and transportation may not seem like the perfect way to spend a sunny Saturday afternoon.

But the opportunity to have a voice in the future of the Braddock district drew nearly 75 residents to the first Citizen Governance Conference, hosted by Supervisor John Cook (R-Braddock) at Frost Achievement Finance Park on May 5.

"It’s exciting to think you can have input in the direction of your community," said Edie Kasper, a resident who attended the conference to learn more about land use and environmental issues.

"This conference is designed to make you a decision-maker on the course of Braddock’s future," Cook told participants. "My goal is develop the Braddock philosophy, not the John Cook philosophy."

Each attendee received a three-ring binder filled with more than 100 pages of facts, figures, and maps about Fairfax County and the Braddock district.

THE MORNING SESSION included a review of the current comprehensive land use and transportation plans for Braddock, and a panel discussion that featured Rob Jackson of the McLean Citizen’s Association and Suzette Kern, who represented the Lee District Budget Committee.

Based on figures from the 2010 U.S. Census, the Braddock District is 55.6 percent residential, compared to the Sully district, which is 35.8 percent residential because of a cluster of commercial and industrial sites. The Mount Vernon district has the least amount of residential space (24.6 percent), owing to the Fort Belvoir complex and the Route 1 commercial corridor.

By contrast, the Dranesville district, which includes the wealthy suburbs of McLean and Great Falls, has the most residential development - nearly 65 percent - as well as the highest median market value of homes at $660,463. Braddock’s median home value is $422,299, close to Fairfax County’s median home value of $429,155.

"We specifically designed the first half of the conference to provide context and background information that will help create Braddock’s new citizen-governance structure," Cook said.

Evan Braff, with the Fairfax County Department of neighborhood & Community Services, facilitated the brainstorming session on Braddock’s future during the afternoon session.

During the second half of the conference, attendees picked one of five breakout sessions that covered a specific policy area: Land Use and Environmental Management, Transportation, Aging in Braddock, Education, and the Fairfax County Budget.

"I was impressed by how comprehensive it was," said resident Mark O’Meara, a Robinson Secondary School’s Athletic Boosters, who was interested in the education committee.

"This is one of the most exciting things to happen in Braddock in a long time," said Jan Hedetniemi, a Tysons Task Force member and Braddock resident, who led the breakout session on land use and environmental management.

"You will have a say in what Braddock looks like in the future," Hedetniemi told participants of the land use session, clearly the most popular breakout session with more than 30 attendees. "We're on the cusp of developing the means to help the Supervisor get informed and comprehensive input on land use and environmental management.

"I want to foster a group that will develop expertise in land use issues," he said. "I don’t think I should establish (land-use) policy or approach. It should be residents of the district."

Cook said an upswing in land use applications in the district was a motivating factor for holding the conference: His office has seen a spike in residential in-fill development applications, where developers seek to add small numbers of homes in still undeveloped lots.

In addition to residential development, the new part of the Braddock district, along Lee Highway from Shirley Gate to the Fairfax County Government Center, includes a swath of high-end commercial development.

COOK SAID HIS GOAL WAS to establish a committee with a non-partisan, rational approach to land use and environmental management for the coming decade.

"Our new Braddock Land Use committee will have citizens review these applications, develop expertise in land use law and policy, and over time, establish a ‘Braddock-style’ approach to land use," Cook said.

Kiel Stone, Cook’s chief of staff, said a lot of the "nuts and bolts" issues still need to be determined. "At the end of the day, there was vibrant communication and this conference will enhance Supervisor Cook’s earlier citizen engagement initiatives."

"Let's not let this drop today," he told the group during the wrap-up session. "Stay involved. Talk to your neighbors. A community of engaged citizens has the potential for extraordinary accomplishments."