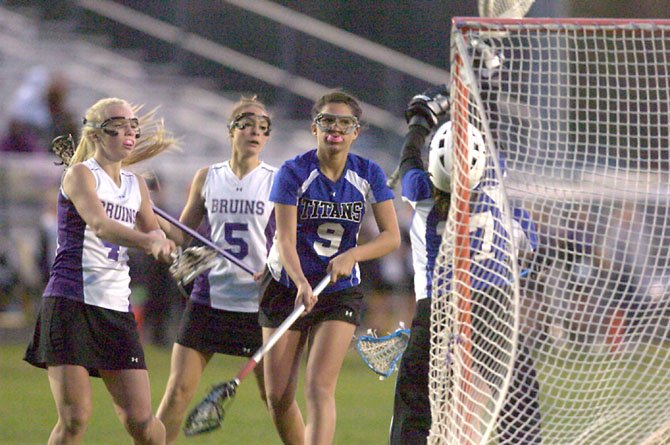 The Lake Braddock Secondary girls’ lacrosse team, shown here in a Patriot District meeting versus T.C. Williams, is the No. 1-seed at the district tournament, which began last Friday and is continuing this week. Photo by Craig Sterbutzel.

Springfield — The semifinals rounds of both the girls’ and boys’ Patriot District lacrosse tournaments were scheduled to take place earlier this week at Lee High School in Springfield.

On the girls’ side, the two semifinals round games were set to take place Tuesday, May 8 at 5 and 7 p.m., both at Lee. The first game was to match top-seeded Lake Braddock versus No. 4-West Potomac. The latter contest was to pair No. 3 West Springfield versus No. 2 W.T. Woodson.

The girls’ semifinals winners are scheduled to meet in the title game 7 p.m. this Friday, May 11 at Lee.

The girls’ eight-team tournament began last Friday night with four quarterfinals round games. The following are results of those playoff encounters: Lake Braddock over No. 8 Lee, 11-2; West Potomac over No. 5 Annandale, 10-4; West Springfield over No. 6 South County, 12-4; and Woodson over No. 7 T.C. Williams, 16-10.

In each of those four quarterfinals games, the winning team was playing at home (as a result of higher seeding). The four first round winning teams, along with advancing to this week’s district semifinals, also clinched a seeding for next week’s 16-team Northern Region tournament.

ON THE BOYS’ SIDE, the following two semifinals games were scheduled to be played earlier this week on Monday, May 7 at Lee: top seed South County versus No. 4 West Springfield; followed by No. 3 Annandale versus No. 2 Woodson. The two semifinals winners will advance to this Friday night’s championship game at Lee High School. Game time for the boys’ finals is 5, and the girls finals will follow.