ow that comprehensive plan has been amended, development application is imminent. 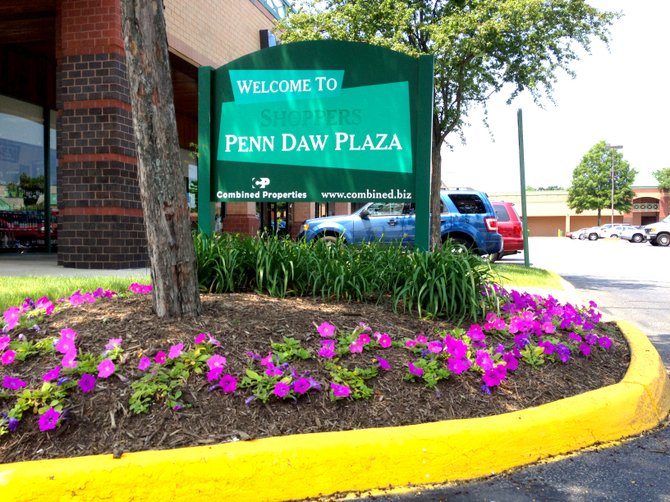 Now that the county’s comprehensive plan has been changed to allow for higher density at the Penn-Daw Shopping Plaza, Lee District Supervisor Jeff McKay says he expects Combined Properties to file an application for redevelopment any day. The move would mark the beginning of a long planning process that is expected to play out over the rest of the year, transforming a suburban strip mall into a five-story mixed-use development with residences and ground-level retail. In the process, county officials will ask developers to fund transportation improvements to the dysfunctional King’s Crossing intersection.

“The community was concerned a little bit about traffic, and how redeveloping this site could potentially cause more traffic,” said Southeast Fairfax County Development Corporation communications director David Ben. “But that’s one of the beauties of going through a comprehensive plan amendment process.”

The stakes are high for Penn-Daw because of what happened on the other side of Kings Crossing, where a developer tangled with neighborhood interests for years. In that case, the developer gave up on the negotiation and decided to build “by-right,” building a Wal-Mart within the existing zoning rather than spending more time negotiating bonus density with county officials and neighborhood residents. Now that change is coming to the other side of the street, many are anxious to find out what that might mean for residents and businesses.

“There's not a day that goes by that someone doesn't ask, ‘Do you know? Do you know? Have you heard? What's going on?’” said Jamillah Scott, manager of the Books-A-Million at Penn-Daw. “I mean every single customer. And what we say is we don't know. It’s a waiting game for us.”

EVER SINCE THE Shopper’s Food Warehouse closed in April 2011, neighbors have been warily eyeing the future. Many say they want to avoid what happened at Kings Crossing, which is viewed by many as a failure of the county’s planning process. That’s why McKay convened a task force so neighborhood residents and business leaders could work together to forge a path forward.

“Instead of letting the developer tell us what to do or having county officials come up with a plan in a vacuum, we want to get a sense of what the economy will support,” said McKay. “This is unprecedented, at least in my experience.”

Walking through the Penn-Daw Plaza, it’s clear that change is in the air. The vacant grocery store was once a major anchor at the strip mall, bringing customers to the other businesses. Now that it’s gone, the remaining businesses say they have already seen a dramatic decline. Many say they are worried about a future that includes high-end mixed-use development, a change that some say would price them out of the market. Others say they are eager to transform the area from a suburban strip mall to a mixed-use urban development.

“Just think about where we are,” said Spring Bank resident Martin Tillett. “We’re less than a mile from a Metro stop. You go anywhere else in the Washington metropolitan region and you’re this close to a Metro stop, you see a lot of development going on. For some reason, we’re missing the ball down here.”

THE PENN-DAW PLAZA takes its name from an old cottage-style inn named the Penn-Daw Hotel. It was named for an Alexandria contractor named Samuel Cooper Dawson and Detroit hotel operator Edward Pennell, who worked together to create the cottages. For decades, the shopping plaza that bears their names has been a central part of the community, a place where customers could buy a book, go grocery shopping or bowl a few frames in an alley located in the basement. Now that redevelopment is imminent, many say a mixed-use development should be at the top of the agenda. Others are not so sure.

“Some are happy. Some would like something better,” said Scott. “A lot are not. They are upset. They more say so about our store. Because once this goes down, there will be no bookstore anywhere near or on Route 1.”