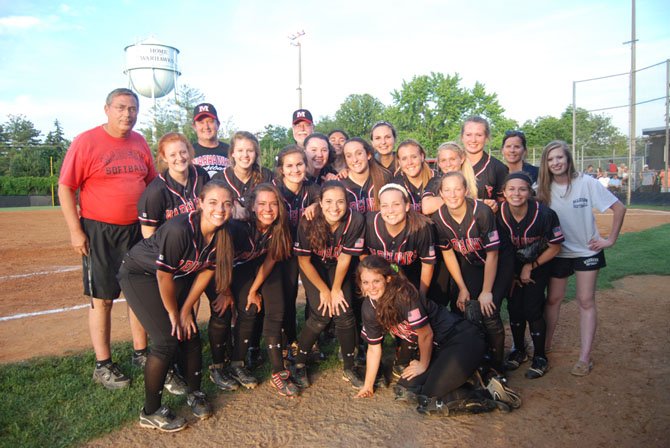 Vienna — The Madison Warhawks' girls softball team fell behind early to the McLean Highlanders in a semifinals game of the Liberty District Tournament last Friday evening before rallying late to claim a 7-3 victory.

McLean jumped out to a first-inning 3-0 lead thanks to some solid hitting, but Madison starting pitcher Elizabeth Fallas settled down as Madison's hitters started to warm up.

The score was tied at 3-3 after four innings, thanks to timely hitting and aggressive base-running by the Warhawks. Both teams then played through the regulation seven innings not able to plate another run. But the Warhawks exploded in their half of the eighth to score four runs, thanks to a combination of great hitting and McLean miscues.

Kelsey Ross took over on the mound in the fifth inning for the Warhawks, taking up where Fallas left off - by shutting down the potent Highlander offense. Fallas gave up three runs (two earned) on five hits in four innings of work. Ross followed that with four relief innings, allowing no runs on three hits while striking out four.

Kat Olson led Madison's offense, going two-for-four, with a double, two RBIs and a walk. Ally Grasso went two-for-five, also driving in two runs. Brittany Powers (2 for 3, RBI), Mary Bolinger (2 for 3), and Kristyn Buscemi (2 for 3) also had multi-hit games for the Warhawks. Ross (1 for 5) and Jackie Yahner (1 for 5, RBI) had Madison's other hits on the night.

Tori Lipnicky, although she did not get a hit, reached base three times on two walks and a McLean error. Alex Alvarez also reached base on a sacrifice bunt that was mishandled by the Highlanders.

The win put the Warhawks, the tournament's No. 3-seed, in position to play for the district title earlier this week on Monday, May 21 versus top seeded Stone Bridge Bulldogs.

TWO DAYS PRIOR to beating McLean in the semifinals, Madison opened up its play at the Liberty District tournament with a game versus Fairfax High on Wednesday, May 16.

There, Kelsey Ross pitched a masterful one-hit shutout in the playoff opener and led the third-seeded Warhawks to an 11-0 victory over the sixth-seeded Rebels. Ross recorded 11 strikeouts in a game that was shortened to five-innings due to the 10-run rule.

MADISON, prior to the playoffs, wrapped up the regular season with an 11-2 Liberty District win at Jefferson High on May 11.

Sophomore Elizabeth Fallas went the distance on the mound, allowing four hits with two strikeouts and one walk. Madison's offense was led by sophomores Kat Olson (3 for 4, 3 RBIs, walk) and Tori Lipnicky (3 for 4, double, RBI, walk, stolen base). Juniors Alex Alvarez (2 for 3, 2 doubles, 2 RBIs, sac bunt) and Kelsey Ross (2 for 4) also had multi-hit games for the Warhawks.

Madison's other runs were driven in by senior Ally Grasso (1 for 5, RBI), Fallas (2 RBIs), Mary Bolinger (RBI), and Brittany Powers (1 for 4, RBI). Jackie Yahner also reached base twice in the game.