Key issue still unresolved: Does city have authority to deprive use of alley to Boat Club?

No photographs, videos or audio recordings are allowed in the Virginia Supreme Court. Photo by Michael Lee Pope. 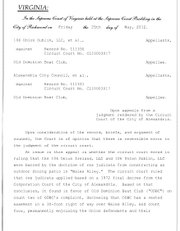 The Virginia Supreme Court has overturned a decision from the Alexandria Circuit Court about the use of a public alley in Old Town, but the case is not over yet. Justices in Richmond remanded the case back to the Alexandria court, which has yet to determine whether or not the city has authority to deprive the Old Dominion Boat Club the right to use the public alley.

“Remanding this case to the Circuit Court without deciding that legal issue is a waste of judicial resources,” wrote Chief Justice Cynthia Kinser in a stinging dissent.

The Supreme Court’s decision is the latest development in an ongoing conflict between the Boat Club and City Hall, which culminated last summer when City Attorney James Banks threated to use the city’s power of eminent domain against the club. Members also clashed with city officials over the waterfront plan, which recommends that the club’s parking lot be transformed into a public park. The latest court challenge is about the ability of club members to use Wales Alley, which stretches from Union Street to the Strand. Lawyers for the Boat Club argued that a 1972 case gave them the right to use the alley, but justices on the Supreme Court disagreed.

"The Circuit Court said that 1972 case was a silver bullet," said Deputy City Attorney Chris Spera. "The Supreme Court said it's not."

AT ISSUE IN THE CASE is a deed from 1789, which allows “free use and passage of the several streets and allies.” Lawyers for the Old Dominion Boat Club say that document allows their members to use the alley to get boats to and from the organization’s boat launch at the foot of King Street. But City Attorney James Banks told justices any easement rights the club had were vaporized when the city assumed responsibility for the road in 1972.

“Our position is that there are no extra rights or benefits for the Boat Club because it previously had easement rights,” Banks told Supreme Court justices in April. “The private easement rights should be extinguished.”

Lawyers for the Boat Club said the city was perverting the charter provision granting authority of public land. Instead of making that land available to the public, they said, the city was doing the opposite — making it available to a restaurant known as Virtue Feed and Grain, denying the public an opportunity to use it in the process. In court documents and before justices, Boat Club lawyers argued that their right to use the alley dates back to the 1789 deed.

“The easement doesn’t just disappear into thin air,” said David Chamowitz, attorney for the Boat Club. “This is condemnation by other means.”

IN A FIVE-PAGE RULING, the Supreme Court concluded that the Alexandria Circuit Court made “a reversible error in judgment.” Last year, a visiting Circuit Court judge ruled that the Boat Club had a vested easement in a 30-foot right of way over Wales Alley. Theoretically, the decision could have prevented the restaurant from installing outdoor tables and chairs to block the alley, which Boat Club members say is needed to transport boats to their ramp at the foot of King Street. City officials let the restaurant install the outdoor dining tables and chairs anyway as the case made its way through the courts.

"What the city has done here is give one private property owner priority over another," said Boat Club member David Elsberg in an interview last year. "What the city is doing is worse than eminent domain because they failed to compensate us."

Banks says that the city has treated Wales Alley as a public street since 1972, in the wake of a separate lawsuit the Boat Club brought against a retailer known as Dockside Imports that wanted to shut down public access to the alley. Since that time, Banks said, the city has been plowing snow, issuing parking tickets and filling potholes.

“The city received the property though the process of implied dedication,” Banks told justices. “As a result, the any private easement rights must necessarily be extinguished by that dedication.”

THE HISTORY of the alley dates back to the earliest days of the city, when former Mayor John Fitzgerald and businessman Valentine Peers had joint ownership of land that’s now known as Wales Alley. Back then it was called Fitzgerald Alley, until Andrew Wales started selling beer in the alley in 1786. Three years later, Fitzgerald and Peers decided to dissolve their joint ownership, creating a deed that allowed “free use and passage.”

“They probably didn’t like working with each other on it,” speculated Andrew Carroll, attorney for Virtue Feed and Grain Restaurant, according to court documents. “So they said, ‘let’s split it,’ and they split it.”

All three of the city's Circuit Court judges recused themselves in the case, an indication that they may have ties to the Boat Club that prevented them from making an impartial decision. The visiting judge from Fairfax County is now expected to call a conference with the opposing legal team to determine how the case should proceed — and how the court should rule on the key issue of whether or not the city has authority to prevent the Boat Club members from using the alley.

"This is not over yet," said Spera. "But now we get to resolve the issue that we wanted resolved in the first place"