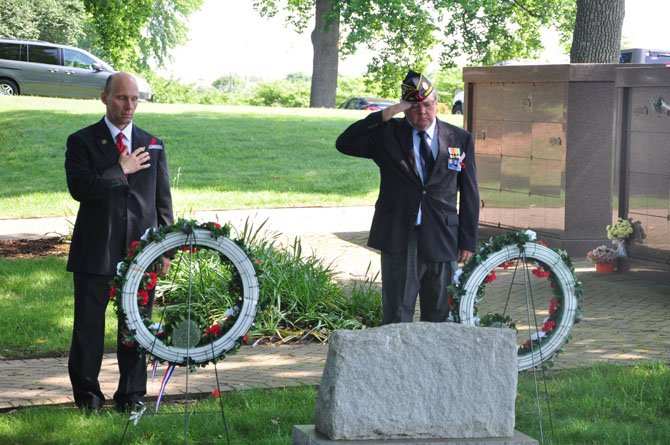 Herndon — The Town of Herndon hosted its annual Memorial Day observance at Chestnut Grove Cemetery Monday, May 28. Members of the American Legion joined with local officials and dozens of residents to commemorate the lives given up for their country. 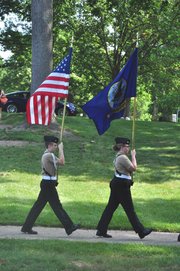 Dave Kirby, councilmember-elect and commander of American Legion Post 184, pointed to recent conflicts as the latest generation of soldiers, sailors, airmen, Marines and guardsmen who volunteered to serve this country’s freedom.

"By the time our last remaining troops returned from Iraq in December 2011, nearly 4,500 of their comrades lost their lives during Operation Iraqi Freedom and New Dawn. We continue to lose American heroes everyday in Afghanistan, military training accidents and missions around the world. The loss to their families, friends, fellow service members and country is permanent."

Kirby pointed to the example of Marine Cpl. Jason Dunham, the first Marine to receive the Medal of Honor since the Vietnam War. Dunham was in Iraq when his unit came under fire, and in the course of action, a live grenade was dropped by the enemy and Dunham threw himself over it, shielding his fellow Marines from the blast.

Dunham died eight days later, and was posthumously given the Medal of Honor in Jan. 2007.

"From the American Revolution to the Global War on Terror, one million American men and women like Cpl. Dunham have made the supreme sacrifice," Kirby said. "They died so that we could continue to cherish the things we love: God, country and family."

A NEW FLAG was flying over the cemetery Monday, the black and white POW-MIA flag, which pays tribute to American service members that have been prisoners of war or are missing in action.

Herndon Mayor Steve DeBenedittis put out a mandate that the flag be flown in the Town of Herndon at the cemetery, the town hall and the municipal center. The American Legion donated the three flags to the town.

DeBenedittis spoke at the event, and he recalled a free moment he had last week when he was able to kick a soccer ball around with his son. He said it brought to mind a family friend and former Langley teacher Dave Sharrett, who used to play outside with his son, Dave Sharrett II.

Pfc. Dave Sharrett II was killed in Iraq in January 2008 while serving with the Army.

"The details of Pfc. Sharrett’s passing are still under investigation, but what is abundantly clear is the pain, the heartbreak and the fierce pride felt by his family," he said. "By his service, and his sacrifice, that boy whose carefree days tossing a ball with his dad in Oakton set an example of heroism and patriotism that’s a shining example of inspiration to us all."

The Oakton post office on White Granite was named after Pfc. Sharrett in 2008.

"In homes across America, life is more still, more silent. Mothers, fathers, wives, husbands and children, all who are living the ultimate sacrifice: a loved one lost on the field of battle, so the rest of us can continue our busy lives in freedom and without fear," DeBenedittis said. "A loved one lost, a soldier whose gift to us we cannot possibly repay, it is these sacrifices we must remember every day, not just on Memorial Day."

DAVID PEMBROKE of Herndon says this is the second year in a row he’s brought his son, 5 and daughter, 3, to the ceremony.

"They know Memorial Day weekend as the day we get to see family and go to the pool for the first time, but I think it’s important for them to know exactly what this weekend is about," said Pembroke, who served in the Air Force for six years. "I want them to know that for the entire history of this country, there has been men and women willing to fight to protect what we believe in. And on a day like today, it’s not about politics, or about whether or not certain wars should have happened, it’s about remembering this country’s greatest heroes."