Herndon Pays Tribute to the Fallen on Memorial Day
Votes

Herndon Pays Tribute to the Fallen on Memorial Day 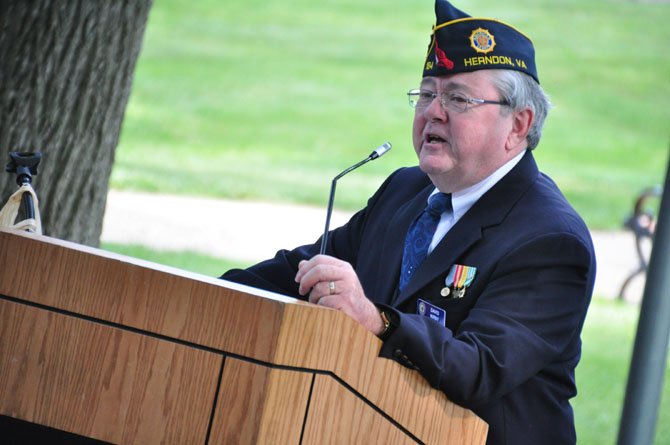 “As the unofficial beginning of summer, let us never forget what Memorial Day means. It is not about beaches, picnics and auto races, it’s a day to remember,” said Dave Kirby, town council member and commander of American Legion Post 184. “To remember once a year is not enough. The widows, widowers, fathers, mothers, brothers, sisters and children remember every day. The empty seat at the dinner table, the smaller gathering at Thanksgiving and the voice of a loved one heard only as a distant memory in one’s mind are constant reminders that they are gone.” 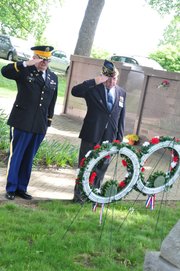 From left, Dr. Duane C. Young, a retired Army major and Dave Kirby, a Herndon Town Council member and commander of the local American Legion, lay a wreath at the Tomb of the Confederate Unknowns at Chestnut Grove Cemetery Monday, May 27.

Kirby read from a letter composed by Marine Sgt. William Stacey. Stacey was killed in an IED explosion in Afghanistan in January 2012. Stacey, 23, was on his fourth deployment to the area.

“The sacrifice made by Sgt. Stacey, and countless other American heroes, has indeed changed the world,” Kirby said. “There is a simplistic and naïve belief that war doesn’t solve anything. I suppose that’s true, unless you count the winning of American independence, the preservation of the Union, the elimination of slavery and the toppling of fascist and terrorist regimes.”

Young, a native of Connecticut, was commissioned in 1974. He served for 20 years as a tank platoon leader, executive officer and commander, in Germany and in the United Stated. He was also an intelligence officer, and was a senior intelligence staff officer at Fort Irwin, Calif.

“This day marks the 145th anniversary of the first official observation of Memorial Day,” he said. “Gen. John A. Logan issued General Order number 11 on May 5, 1868, reading in part, ‘the 30th day of May, 1868 is designated for the purpose of strewing with flowers and otherwise decorating the graves of comrades who died in defense of their country…’ The original order codified a practice very widespread in the years immediately following the Civil War, a practice very widespread in both the North and the South.”

Young recalled his experiences on Memorial Day in 1976. While stationed in Germany, he and a fellow officer pooled their money together for a trip to visit the grave of Gen. George S. Patton in Luxembourg.

Members of the Herndon Naval Junior ROTC helped prepare the annual Avenue of Flags in the cemetery. The major road was lined with 57 American flags, casket flags on loan from families of deceased veterans.

“Placing the flags along the road was a wonderful touch, the second you turn into the cemetery, you’re greeted with a striking vision,” said Barry Monroe of Herndon. “It’s hard not to be affected by the thought of each one of those families who decided to lend a memento that reminds them of their loved ones for a ceremony like today’s.”