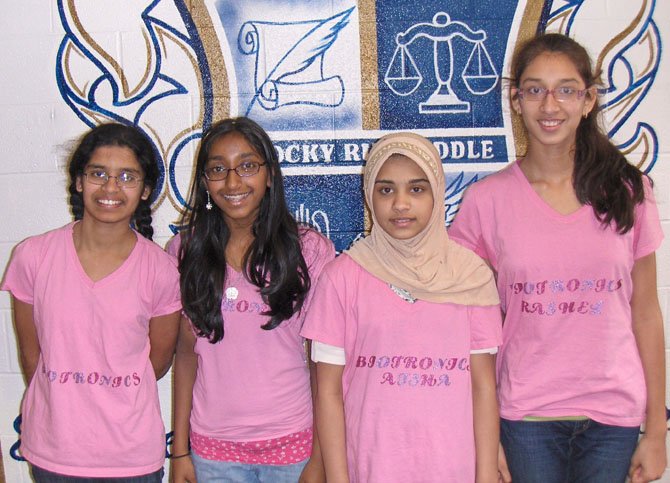 Chantilly — The boys on Rocky Run Middle School’s eighth-grade eCybermission team won the Virginia state championship, but the girls of the seventh-grade team are no slouches, either. They, too, did their school proud, finishing second in the state.

“It’s unusual for a seventh-grade team to come in second in the state, so I’m very impressed,” said Principal Matt Eline. “I have high expectations for them to take it all next year. And besides being bright, they’re also very nice.”

Coached by Joy Pryde-Haskins, the team members are Nayana Suvarna, Mallika Maheepathi, Aisha Siddiqui and Rashel Bajaj. “Our project was about biometrics and how people use passwords and user ID every day to access various online resources,” said Rashel. Aisha explained that biometrics is comprised of the individual characteristics used to identify a person.

“Some examples are fingerprints and eye and retina scans,” said Rashel. “We did a survey at the Chantilly Library and discovered that 76 percent of the people didn’t know what biometrics was — and the 4 percent who did didn’t consider using it.”

But, said Aisha, it can be used for security purposes. So the team decided to find a biometrics solution that would be inexpensive, efficient and easy for people to use.”

“We researched, read books and looked at Web sites,” said Mallika. “We wanted to see the benefits and drawbacks of different types of biometric systems,” added Nayana.

“There was facial-recognition software — based on, for example, the shape of the nose, color of eyes, etc. — that would let people log into their computers if these facial-recognition cues matched a 3D photo of them stored inside the computer,” said Rashel.

So, said Mallika, “We tested it on ourselves to see if it would work, and we used an old laptop and an external Web cam and downloaded low-cost software onto the computer.” Rashel said they actually chose a free version of this software to show that it need not be expensive to work.

They decided to share their solution with the community. “So we set up an experiment in the library, having people try it out,” said Nayana. “Then we gave them a follow-up survey on biometrics to get their feedback,” said Aisha.

“Over 70 percent said they liked the facial-recognition software and thought it was more efficient and secure than the traditional method of logging on,” said Rashel. It’s important, said Aisha, because “This is one of the many things that people forget to keep secure.”

People asked the students if this way of logging on would work if someone else just placed a photo of another person in front of the computer. Would someone then be able to access another person’s computer?

No, said Nayana, because “the computer had scanned a 3D model of your face.” And, added Rashel, “The human body is always moving — your eyes, mouth — but a photo is static, so the computer knows a photo isn’t the real you.”

Aisha said that, with many types of software, the lighting needs to be the same to let its user log on, but that wasn’t the case with the software the students selected. “Ours could adjust to the light and recognize you in any environment,” she said.

For the eCybermission competition, the girls wrote a summary of their project and submitted it online with their research and charts. “We also made a PowerPoint displaying our research,” said Mallika.

“It was really fun because we did this over four or five months, so we got to know each other really well,” said Rashel. “And we learned the importance of compromising because, on a team, you can’t always have your way. So we learned life skills.”

“We also learned how to work together in a group and get things done in an organized fashion,” said Aisha. “My favorite part was doing the surveys because it was interesting to find out what other people thought. And since we were doing this for the community, that was very important.”

Nayana enjoyed learning more about biometrics and its benefits, and Mallika liked writing the mission folder and posting their documents online “because we had so much research to show.”

As for capturing second in the state, Nayana said, “It was exciting to know that we solved a problem and biometrics could be used in the community.” And considering that some 200 teams statewide were competing, Mallika and Aisha were happy that they beat most of them. Said Aisha: “We were exhilarated that we could be part of this event and do so well in it, in our first time.”

“It was also a great feeling because, before this project, I didn’t even know what biometrics was,” said Rashel. “And it’s great to know that, after all our hard work, we got second in the state.”