Alexandria — Asserting that Alexandria public housing tenants have basic rights too, community activists Dorothy Turner and Gwen Menefee-Smith embarked on mission to assure that their peers would be treated fairly and with respect. In their decades-long journey for justice, each woman felt the pain imposed on unpopular crusaders, but were ultimately uplifted as those who struggled to do good for others.

The two women, both public housing tenants themselves earlier in life, worked tirelessly to improve the quality of living for Alexandria low income and minority residents. In the 1960s and 1970s, Alexandria was not in compliance with federal Housing and Urban Development guidelines and there was a pervasive attitude of disrespect, intimidation and unfair practices against people of color, Menefee-Smith said. 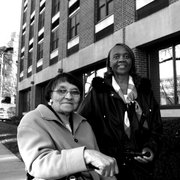 Dorothy Turner and Gwen Menefee-Smith helped found the Alexandria Tenants Council more than 40 years ago with the primary goal of working with city officials and the Alexandria Redevelopment and Housing Authority to establish non-discriminatory and fair regulations regarding housing policies.

Similar to many communities at the height of nationwide racial unrest, though Alexandria public housing had just been integrated, African American tenants were not treated equally. A subjective high moral standard was imposed as a condition of residency, Turner said, especially upon single mothers or mothers of multiple children.

“The administrators were so disrespectful and rude and intrusive in your personal life when people just needed a safe, decent place to live,” agreed Menefee-Smith. The feelings of oppression extended beyond housing issues, she asserted. There was no encouragement for higher education, job training or civic involvement. “One administrator said to me, ‘Your course has already been charted. You have made your bed now and you have to lie in it.”

“Just because you’re in public housing, it does not need to be a death sentence. We were taxpayers, law-abiding decent citizens and we had a right to have voices in how and where we lived.”

Turner and Menefee-Smith joined with other tenants to bring about change. Working with the Urban League, the National Association for the Advancement of Colored People, churches, local civil rights attorneys and advocacy organizations, the two helped found the Alexandria Tenants Council more than 40 years ago. Their primary goal was to work with city officials and the Alexandria Redevelopment and Housing Authority to establish non-discriminatory and fair regulations regarding housing policies. They also sought to provide legal, economic, social and educational support for tenants, and for the preservation of allotted numbers of public housing units in the city after some apartments were demolished.

Turner and Menefee-Smith broadened their efforts to organize voter registration drives and non-partisan grassroots support of city, state and federal candidates for office. “We had to get tenants out to vote. We looked at politicians who didn’t respect us and worked for their opposition. We can’t blame people for needing the services. Politicians are supposed to do the right thing,” Menefee-Smith said.

Turner was born and raised in Del Ray and is a descendant of one of the oldest African American families in the city. She attended St. Joseph’s Elementary School and Parker -Gray High School. In 1968, she moved into the John Roberts public housing complex, where she lived for 13 years with her husband and children. She recalls that public housing had just been integrated and that an African American, Nelson Greene, was on the City Council. At the time, housing officials tried to deny unwed mothers space in public housing, a major point of contention within the black community. It was a burning source of her discontent and therefore time, she said, to “fight for something due to us.” Turner said she was also inspired by her brother, one of five young men who had been arrested for protesting separate, but unequal public library facilities.

In addition to improving housing conditions and policies, she, Menefee-Smith and others pushed for increased black representation on City Council, commissions, and on the housing authority board. They worked the polls and picketed Yellow Cab, which would not hire black drivers. They also saw a newly established community center on Wythe Street become a meeting space, wedding venue and gathering place for teenagers. Soon sewing, typing and preparation classes for the Civil Service exam were offered. “We just did a lot of things and other people started helping us,” said Turner.

One of her proudest moments, she reflected, was the successful sit-in campaign to offer black history classes at T.C. Williams High School.

Although not a native of Alexandria, Menefee-Smith became acquainted with the town at an early age. Her grandfather worked in Alexandria, and during summers she stayed in the house he purchased. In the early 1960s, she moved to Alexandria with her military husband and reared three children. The marriage didn’t last, the couple separated, then divorced, and she wanted to stay in the area to be close to family. As a single mother Menefee-Smith had limited resources after leaving her husband and eventually ended up in a public housing apartment. She felt the scorn of housing officials due to her divorced and single mother status, she recalled. By knocking on neighbors’ doors, Menefee-Smith confirmed they felt the same intimidation and fear of being ejected from their apartments for unfair moral standards imposed upon them. “They were traumatized and scared to death,” she said. It was at a meeting organized by the Urban League that she met Dorothy Turner, who had just moved into public housing herself. “Word got arranged that local lawyers and the NAACP were interested in what was going on. The church was filled and it became a time of personal growth. It led me to get involved with other tenants.”

Meanwhile, Menefee-Smith had other personal obstacles to overcome. She bristled when a housing administrator denigrated her educational goals and career potential. “Your chances are very slim and you need to come to terms with that,” she was told. Instead, she attended Northern Virginia Community College, then George Mason University to get her undergraduate degree in social welfare, using a patchwork of scholarship, daycare and transportation assistance. She attended Howard University for her master’s degree with scholarship help, working 20 hours a week while attending classes.

However, her path was still not cleared for easy success. She, Turner and others were very concerned when the Housing Authority proposed destruction of blocks of public housing units without provision for displaced families. More than 30 years later, Menefee-Smith recounted how her increased activism led to false criminal charges that she had stolen money from an elderly resident. As a Housing Authority employee at the time, the action was prompted, she said, to remove her from her job. Menefee-Smith was fingerprinted, and the case went to hearings, and then the grand jury before she was cleared. Public housing tenants picketed the police chief’s house and one “alleged witness who gave false testimony” committed suicide. The FBI was called in to investigate. Despite her eventual vindication, Menefee-Smith switched to a job in Washington, D.C. to provide health care for the elderly. “That did not stop me from being involved with Alexandria tenants.”

Living Legends of Alexandria is an ongoing 501(c)(3) photo-documentary project to identify, honor and chronicle Alexandria's Living Legends. The project was conceived by artist-photographer Nina Tisara to create an enduring artistic record of the people whose vision and dedication make a positive, tangible difference to the quality of life in Alexandria. This is one of a series of profiles that will appear this year.

Menefee-Smith and Turner expanded their crusade for the disadvantaged and elderly by advocating for senior citizens, especially in the arenas of affordable health care and affordable housing. The women are currently working to improve the well-being of mentally challenged persons, especially African American and Hispanic at- risk special education students.

Turner explained that some parents need guidance to navigate the complex rules surrounding individualized education plans for special education students. It is especially true when English may not be their first language or if they have had limited schooling themselves. Education will always be the best means for a person to improve him or herself, Turner said, so it is critical that poor families get the support they need from the community. Menefee-Smith added that it is their continuing concern that Alexandria is losing young people — potential community leaders — who can’t afford to live in here. Education makes the difference in getting better paying jobs.

“I will always be an advocate for poor people,” said Menefee-Smith. She repeated her intent to keep working for the dignity and rights of minorities and the economically challenged. “You just can’t walk away from them.”

Turner agrees. At 83, she uses a walker and does not have the physical vigor she once had, but she still campaigns for disadvantaged families. “I’ve lived a full life and am blessed the Lord let me live so long to help people.”