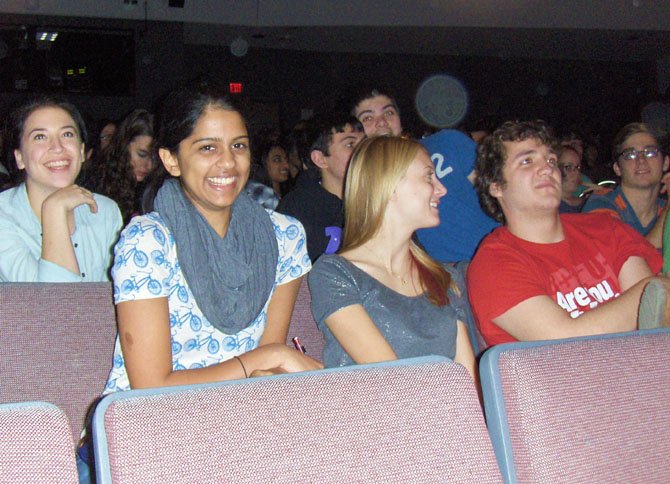 Roshni Gorur (in scarf) enjoys a laugh with classmates at the program’s end.

Chantilly — Chantilly High students and administration also got to question the presidential candidates’ representatives last week. Below are the results, plus some students’ reactions to the event:

Q: (From senior Kathryn Herbert): Where does each candidate stand on the environment, oil and the energy crisis?

LeMunyon: “There’s a lot of agreement on protecting the environment. The real difference is, are we going to apply a cost-benefit analysis before we impose the regulations? Because EPA regulations on businesses can hurt the economy.”

Redpath: “The nations with the cleanest environments have the healthiest economies. I recommend people read the book, “Cool It,” about ways to have better energy efficiency.”

Chopra: “President Obama cares deeply about this issue. He believes we should invest in the foundation, research and development of a clean-energy future. We should spark innovation — Obama got the auto industry to agree to increase cars’ efficiency standards. And we need to make investments in our smart grid to make our energy more efficient.”

Turner: “Congress should get out of the energy business. We should be exporting to the Arabs, not the other way around. And don’t fall for the hoax of global warming.” 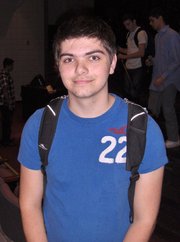 Q: (From senior Michael Hawthorne): What will you do about same-sex marriage — not just approve or disapprove?

Redpath: “Anything peaceful should be legal; gay marriage is peaceful.”

Chopra: “Our country is stronger when we tap into everyone’s expertise. Obama expanded hate-crime laws and has come out in favor of gay marriage. The president convened anti-bullying summits and is trying to prevent online bullying so people won’t feel ostracized and can connect in this economy and be successful.”

Turner: “We have to have basic, moral standards in our country. Goode would support the marriage amendment and wouldn’t make one state adopt what another state adopted.”

LeMunyon: “Some states will be different on these issues, and that’s better than trying to get a unified, federal policy on them.”

Q: (From Assistant Principal Shawn Frank): Chantilly is a great school, but teacher salaries have been frozen. What will you do to help?

Turner: “We don’t need the federal government involved in education; there’d be no spending.”

Chopra: “Obama supports teachers and believes in bringing innovation to schools, including his Race to the Top program.”

Redpath: “Abolish the Department of Education and leave it to the states.”

LeMunyon: “It’s really the state and local school boards that make a difference in local schools.”

Q: (From senior Roshni Gorur): How would your candidate’s appointments to the Supreme Court affect Roe vs. Wade?

Chopra: “Obama would continue to focus on the excellence of the justice candidate. On access to women’s health, this is a sharply contrasted race.”

LeMunyon: “It’s not a question of how judges feel about an issue. Judges should apply the Constitution as it’s written.”

Afterward, a few students shared their impressions of what they’d just heard. “It was eye-opening,” said Gorur. “As teens in a battleground state, we’re exposed to a lot of blown-up propaganda, opinions and ads catering to an extreme,” she said. “So it was interesting seeing how the candidates’ positions were interpreted by someone else and how they addressed the issues. And it was nice to get exposure to different points of view.”

Hawthorne said the event didn’t impact his opinions. “If I could vote, I’d vote Democrat,” he said. “It was interesting to see a clearer picture of the third parties — especially the Constitution Party — because I didn’t really know anything about them, at all.”

“I think Chopra did a great job and was appropriately impassioned about what he was saying,” continued Hawthorne. “My opinion about LeMunyon was more favorable than about Romney; Lemunyon seemed more moderate.”

Senior Hattie Clougherty said it was “great to show all the different parties, especially since lots of the seniors can vote this year. Age 18 is the demographic that has the least percentage of voters, so it was good to make everyone aware of the issues and present the candidates on a personal level.”