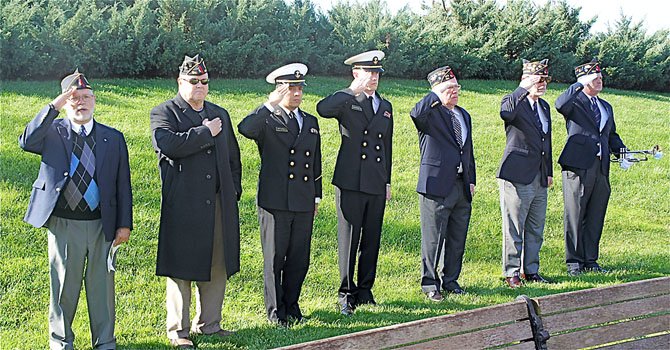 From left—David Lacombe, US Army Ret., William Spence, US Army Ret., Naval Academy sophomore Fabio Garcia, Naval Academy freshman John Wilson, William G. Wright, Sr., US Army Ret., Bob Thompson, US Navy Ret., and Eric Clauch, US Airforce. The veterans insisted that the young naval cadets join them in the military line-up. Garcia and Wilson were both members of the Herndon Junior Naval ROTC before taking the next step in their careers at the Naval Academy. Photo by Andrea Worker

The crowd listens to American Legion Post 184 Commander David Kirby's remarks at the Veterans Day Observance at the Town Green in Herndon.

“The eleventh hour of the eleventh day of the eleventh month. Let us observe two full minutes of silence.” With those words, David Kirby, commander of Herndon-Reston American Legion Wayne M. Kidwell Post 184, opened the 2012 Veterans Day observance, addressing veterans, active duty members, town dignitaries and respectful citizens gathered on the green behind the Herndon Municipal Center. The commander was, of course, referring to 11 a.m., Nov. 11, 1918—the date and hour when hostilities on the Western Front of World War I officially came to an end. Originally celebrated as “Armistice Day” to remember those fallen in combat during that war, what we now call Veterans Day has evolved to honor those who made that ultimate sacrifice, and to thank all who have served and continue to do so. 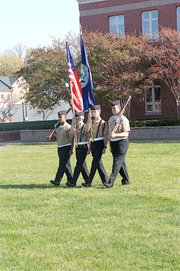 The "Posting of the Colors." Young members of the Herndon Junior Naval ROTC march the flags in for their presentation at the Veterans Day Observance ceremony.

The first of the two minutes of silence is observed to remember the approximately 20 million people who died during the war. The second minute is dedicated to those left behind who were most affected by those losses—the family and friends of fallen heroes.

AT THE START of his remarks, Kirby asked the crowd to especially remember the two former Navy Seals who had been killed during the recent attack on the US Embassy in Benghazi, Libya – Glen Doherty and Tyrone Woods. “We revere these heroes,” said Kirby, “because they revered us. They paid the price for a land worth serving. That price is also paid by their heartbroken families.” Kirby noted that the American Legion was a major source of support for service personnel and their families, citing a number of programs and resources offered by the organization. He asked that employers consider veterans for their hiring needs, and reminded the assembly that a large number of police, firefighters and first responders are veterans. He also pointed out that too many veterans become homeless “when they shed their uniforms. Hardly the thanks of a grateful nation. Let us serve them as well as they served us,” he asked.

Many of these themes were reiterated by the occasion’s guest speaker, Lieutenant Colonel Debra M. Biely, USMC Ret. “It’s about time the Post had its first woman guest speaker,” declared Commander Kirby. “And who better to start this new tradition.” Kirby introduced Biely, highlighting many of her numerous accomplishments both during her 20 years in the United States Marine Corps, and as a civilian since her retirement. The Lt. Colonel spoke of how highly trained, disciplined and suited for teamwork and deadlines are our veterans. “Hire a vet. Work veteran-owned companies. It’s one small way to honor those who ensure that we can love in freedom,” stated Biely.

BIELY AND KIRBY laid the memorial wreaths to the Sounding of Taps by bugler Eric Claunch. Post 184 Chaplain Dmytro Andriuk performed the opening invocation and the closing benediction before the ceremonial Retiring of the Colors. The Herndon Junior Naval ROTC handled the flags. As the observance came to its close, Commander Kirby invited the gathering to join in refreshments provided by the Herndon Women’s Club and said a visit to nearby Chestnut Grove Ceremony to view the Avenue of Flags erected there in honor of all veterans would be well worth the trip.