Titans must overcome the loss of key seniors. 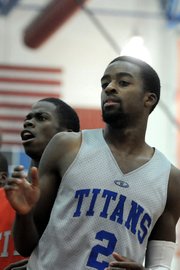 Senior forward Landon Moss will play a major role at both ends of the floor for the T.C. Williams boys’ basketball team.

Alexandria — Some key faces will be missing from last year’s Patriot District championship team, but head coach Julian King said the 2012-13 T.C. Williams boys’ basketball team could look like a team that made it even further.

Gone are Northern Region Player of the Year TJ Huggins, four-year varsity point guard Daquan Kerman, 3-point shooting threat Jordan Byrd and rebounder Damoni Moore. King said the Titans plan to fill their voids with a committee approach, similar to that of his 2010-11 team that reached the state semifinals and was an overtime loss from advancing to the championship game.

“This team,” King said, “will probably seem more like our team that went to the final four (in 2011) — not a lot of superstars, but just a good group of kids that played hard and whoever got it done that night stepped up and everyone else just went with the flow.”

Last year, Huggins averaged 17 points and six rebounds en route to first-team all-state honors. Standing 6 feet 5, he was an athletic player who could create problems for a defense with his size. King said he isn’t expecting one player to completely fill Huggins’ role. However, 6-foot-4 senior Landon Moss has the tools and experience to be a force at both ends of the floor.

“[Huggins was] kind of was groomed for [his role],” King said. “He was on varsity for three years and kind of got a chance to grow into that role. I don’t want to just thrust somebody into that and say, hey, duplicate what this guy did. Let’s just say Landon Moss increases his production. We won’t say he’s filling that role, but he’s filling a different void for us, because no one’s going to replace what TJ did.”

“This team will probably seem more like our team that went to the final four (in 2011) — not a lot of superstars, but just a good group of kids that played hard and whoever got it done that night stepped up and everyone else just went with the flow.”

King said he’s looking for Moss to increase his scoring production from around 11 points to 16 or 17 per contest, and average nearly double-digit rebounds.

Moss is entering his third year with the Titans. 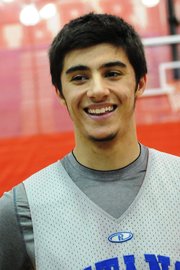 Junior guard Mert Ozkaynak has been on the varsity since his freshman season.

King said a committee of players will share ball-handling duties after the graduation of Kerman, a three-year starter at point guard. Sophomore Malik Smith is one player who have the ball in his hands. King praised Smith during his freshman year, saying the 5-foot-6 guard had a bright future.

“I feel more comfortable than last year,” Smith said. “I was kind of nervous — I was a freshman on varsity — but now I feel better.”

The Titans figure to have some size and toughness inside. Seniors Grant Dickinson and Torrey Johnson, and juniors Jeremiah Clarke and Malik Carney will provide depth in the paint.

While the team will figure out ways to score points, its priority is defense.

“Our first goal,” Ozkaynak said, “is to stop the enemy.”

TC will scrimmage at Landon School at 9 a.m. on Saturday, Nov. 17. The Titans will open the regular season at Edison on Dec. 7.