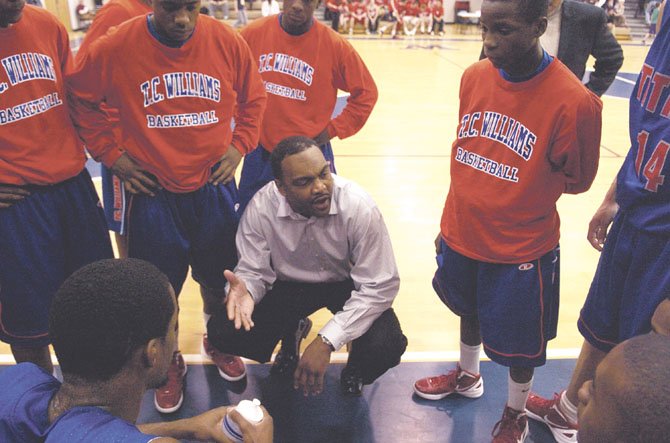 Fairfax — The T.C. Williams boys’ basketball team trailed Woodson by two points midway through the fourth quarter and was in search of a defensive stop when the Cavaliers passed the ball to Peter Murray, who was standing alone at the top of the arc.

Murray, a reserve post who had yet to score, let fly from long range, burying a 3-pointer that left TC head coach Julian King slumping forward in disbelief in front of the Titans’ bench. 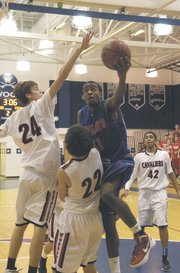 Murray’s 3-pointer was one of 13 for the Cavaliers, whose sharp shooting lifted them past the Titans, 73-70, in double overtime on Jan. 24 at Woodson. The victory improved the Cavaliers’ record to 14-3 and helped them retain sole possession of first place in the Patriot District with an 8-1 mark. It also gave Woodson a regular-season sweep against a TC program that has won four of the last five Northern Region championships. Meanwhile, the Titans dropped to 8-8, including 5-5 in the district. TC had won its previous two games against Patriot opponents, beating Annandale and West Potomac.

"We still have a lot of work to do," King said. "We thought we were turning the corner a few games ago. There are just a lot of little things we need to take care of and stop making the same mistakes over and over at crucial times of the game."

One area in which the Titans struggled was perimeter defense. TC ran into a hot-handed Cavaliers team, but King and junior Landon Moss said the Titans could have done more to stop them.

"We knew they could shoot coming in," Moss said. "We just didn’t close out hard enough."

Woodson’s 3-point shooting wasn’t the only factor that led to defeat for the Titans. TC held a lead in the final minute of regulation and each overtime period, only to have Woodson battle back.

A Moss 3-pointer gave TC a 64-61 advantage late in the first overtime. The Titans had a chance to extend their lead to two possessions but came up empty on the front end of a one-and-one. Woodson’s Alex Boock capitalized, knocking down a 3-pointer with 12.4 seconds remaining to send the game into a second overtime.

"Those [Titan] teams that were successful, they weren’t great or overly talented teams, they just worked extremely hard and they didn’t think they could lose. They were the ultimate competitors. They were very confident and this group has to learn that you’re going to have ups and downs, you’ve just got to keep playing."

A bucket by Damoni Moore gave TC a 57-55 lead late in regulation, but a putback by Woodson’s Brandon Stepka sent the game into overtime.

King said the Titans need to learn how to relax and remain confident in times of adversity. 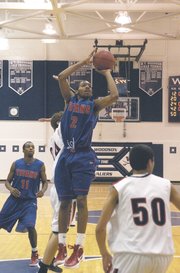 "With all the success we’ve had, you can’t put your head down, you’ve got to keep working," King said. "Those [Titan] teams that were successful, they weren’t great or overly talented teams, they just worked extremely hard and they didn’t think they could lose. They were the ultimate competitors. They were very confident and this group has to learn that you’re going to have ups and downs, you’ve just got to keep playing."

While the Titans fell short, Moss and senior T.J. Huggins played well in defeat. Moss finished with a double-double, scoring 22 points and grabbing 10 rebounds. After TC was held without a field goal during the game’s first four minutes, the 6-foot-5 Moss threw down a dunk in transition over the top of a Woodson player, drawing a foul in the process.

"I think he played exceptionally well," King said. "He’ll be just as hard on himself as I am because there’s a few layups here and there we missed and some great opportunities to get easy scores."

"I think he played a pretty good game," King said. "We just need him to be a little more aggressive. Between Jordan [Byrd], T.J. and Landon, we need to have three guys being in attack mode at all times."

Tommy Stepka led Woodson with 24 points, including a career-high six 3-pointers. Brandon Stepka scored 12 points for the Cavaliers and Bowles, Jr. had added 11.

TC has dropped six of its last eight games, including three of its last five against Patriot District opponents. The Titans have six regular season games remaining, including for district matchups, before the start of the postseason.

The "hardest part [about losing games] is that it’s happening on my watch," Huggins said. "It’s my last year. Me, I’m a senior, and I can’t let it happen on my team."