Alexandria — The T.C. Williams boys’ basketball program has won the last four Northern Region tournaments for which it has qualified. Thanks to a career night from senior T.J. Huggins, the Titans will have a chance to extend the streak to five.

Huggins scored a career-best 29 points to lead fourth-seed TC past No. 5 West Potomac 57-42 in the opening round of the Patriot District tournament on Feb. 14 at the Garden. The Titans advanced to the semifinals and assured themselves of a berth in the Northern Region tournament. 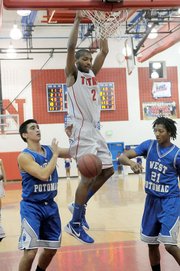 TC led 24-21 early in the third quarter when Huggins started to take over. The 6-foot-6 playmaker scored the Titans’ next 11 points, extending the lead to eight. West Potomac closed the gap to two points midway through the fourth quarter, but TC closed the game on a 16-3 run, including seven more points from Huggins, who put the finishing touches on his final home game with a breakaway, one-handed dunk.

"[I’m] just being aggressive," Huggins said. "Sometimes I’ll score in bunches, then go in a lull. I tried to keep it going."

"He’s accepting it," TC head coach Julian King said of Huggins and his role as the Titans’ go-to scorer. "He’s finally going into the role we envisioned for him. He’s been pretty good all year, but inconsistent. I think if he’s a little consistent, he can be dominant on some nights, which tonight he was."

King was also pleased with the performance of senior point guard Daquan Kerman.

"He played a great game," the coach said. "He handles the ball for us 90 percent of the time. I think he limited his turnovers tonight, had some good assists [and] he ran the show."

TC has won four of the last five region tournaments. In 2010, the Titans entered districts as the No. 7 seed after forfeiting 12 victories due to the use of ineligible players. TC lost to No. 2 Annandale in the opening round and failed to qualify for the regional tournament. Last season, the Titans returned to their winning ways, winning the district and region titles before losing in the state semifinals.

"[I’m] just being aggressive. Sometimes I’ll score in bunches, then go in a lull. I tried to keep it going."

This year, TC entered districts in an unfamiliar position: with nine on-court losses. King was asked about how it feels to win a first-round district game when not sitting at the top of the standings.

"It’s not really relief, it’s a confidence booster," King said. "Getting to the second round, just knowing that we can go out and do exactly what we talked about before the game. Did we have some ups and downs? Yes. But for the most part we were up most of the game. I was happy about that."

"Of course we’re happy," Moss said of beating West Potomac, "but we came into the season with goals to win the state championship. It’s just a stepping stone."