Final Tree Decision Yet to Come

Final tests to be run on white oaks at Georgetown Pike-Walker Road intersection. 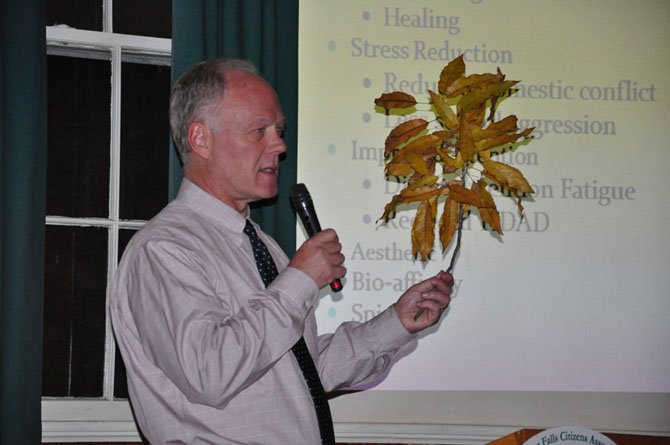 Great Falls — The trees at the intersection of Georgetown Pike and Walker Road will be subject to at least one more test to determine if they propose a safety hazard to drivers. The Virginia Department of Transportation had decided Sept. 18 to remove the trees as part of a mass removal of potentially hazardous trees, but announced Sept. 28 that they would wait for the community to hire an arborist.

A portion of arborist Ed Milhous' report on the two white oak trees at the corner of the Georgetown Pike-Walker Road intersection.

After arborist Ed Milhous performed an assessment of the trees in late September, the Virginia Department of Transportation had planned to remove the trees Oct. 1, but the Great Falls Citizens Association requested time from VDOT for additional study. This was granted, and several arborists recently examined the trees using several pieces of equipment that Milhous, who performed mostly visual and surface tests, did not.

"One arborist used a resistograph, [which detects decay and cavities], which had never been used before, another one spent four hours climbing up the tree performing an aerial assessment," said Bill Canis, co-chair of the GFCA’s environment committee. "We asked VDOT to put the arborists together, which they did in a conference call, and said there was one more step, using a piece of equipment called tomography, sort of like an X-ray machine, to see whether those trees need to be removed or not. That will be the final piece."

"One question, which hasn’t been answered yet, is perhaps one or both of the trees could be significantly pruned in a way that would remove its danger in terms of falling into the roads," Canis said. "These trees have been here since the farm days, and we wanted to be careful about the process."

Ben Herman of Great Falls, who passes through the intersection at least twice a day, every day, says he hopes whatever decision is made is the result of as much information as possible.

"I fully understand the dangers involved, especially in light of the man who was tragically killed over the summer, so I know it’s a sensitive issue. I personally like the way they look and don’t think they are a safety hazard for me personally, but that might not be how everyone feels," he said. "But quite frankly, if we start losing trees at the commercial center, everything just becomes another strip mall, which we have plenty of in the area. So if there is a possibility they can stay, I’m all for that."

According to Fairfax County’s Urban Forestry Program guidelines, trees are considered hazardous after community complaints are received, and only if the tree poses a threat to the public at large. Trees that threaten private property are considered civil issues.

A lot of people can assume that when we use the term ‘tree conservation,’ we’re talking about preservation," said Mike Knapp, director of Fairfax County’s Urban Forest Management program. "But conservation is a larger concept, it involves preservation, but acknowledges that sometimes trees have to be taken out in order to satisfy human values and needs."