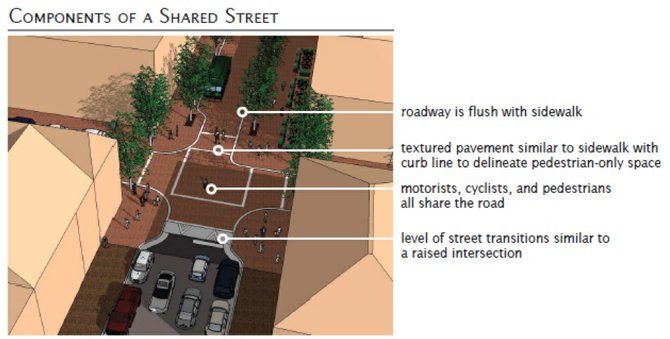 Union Street was the city’s first waterfront plan, a public works project funded by wealthy landowners to extend the city east into the river in the 1780s. In the wake of the Revolutionary War, city leaders of the era were eager to promote the new republic of states. So they named the newly created road “Union Street.” Now, members of the City Council will be considering a plan to create a more perfect Union, although some in Old Town are calling it a Civil War.

“If this is funded,” said Old Town Civic Association President Yvonne Callahan, “we are just going to have a rather expensive experiment.”

Perhaps the most radical change is a proposal to create a “shared street” along the Union Street corridor. It’s a philosophy that has been used in Europe for decades, originally designed as a way to create a greater sense of uncertainty for drivers and force them to reduce their speeds. Here in Alexandria, the plan calls for a new design along Union Street in which both the street and the sidewalk are flush from building face to building face. Motorists, bicyclists and pedestrians would all share the pavement.

“Pedestrians are the biggest user on Union Street, but they have the least amount of space,” said Sandra Marks, acting deputy director for the Department of Transportation and Environmental Services. “So this would equalize and better distribute the right-of-way and also allow flexibility for different uses.”

TRANSFORMING UNION STREET into a “shared street” would take anywhere from five to 10 years, according to a memorandum outlining the proposed changes. Curbs and gutters would be removed. Textured pavement and banding treatments would be added to separate pedestrian-only spaces. The document acknowledges that the cost would be “considerable,” but no amount is specified.

“Implementation of this concept will require further design,” wrote Waterfront Commission Chairman Nathan Macek in a letter endorsing the recommendations, “which should consider such factors as the optimal allocation of space between users, delivery vehicle access, curb design and transition, traffic calming and right-of-way, materials and curb placement, drainage and accommodation of special events.”

Critics say the idea will never work in Alexandria, where sidewalks play an important role in fabric of Old Town. They say creating more uncertainty for drivers on Union Street would only lead to chaos, perhaps even making the corridor more dangerous than it already is. Ultimately, opponents of the idea say, the shared streets philosophy is a European experiment that did not work there and should not be replicated here.

“It was a fad, and it’s dying out,” said Poul Hertel, former president of Old Town Civic. “As a philosophy it sounds good. But unfortunately it doesn’t hold water.”

THE RECOMMENDATIONS for Union Street are an offshoot of the controversial waterfront plan, a proposal to almost triple density at three sites on Union Street slated for redevelopment compared to what’s there now. Neighbors in Old Town revolted, filing a series of lawsuits that have the zoning changes in a legal limbo. One part of the plan that is moving forward, however, is a study of parking, bicycle, trolley, motorcoach and pedestrian use of Union Street. The city selected the Toole Design Group as a consultant, and the Waterfront Commission began considering initial recommendations.

“In general, the Waterfront Commission finds that current conditions on Union Street can be improved and that changes are needed,” wrote Macek. “Along the entire corridor, improvements should be high-quality and consistent with the historic character of Union Street.”

The recommendations, which will be considered by City Council next month, include a variety of suggestions for Union Street. One of the more radical recommendations would be a pilot program to create of a new pedestrian plaza in the unit block of King Street. One version of the pilot would maintain one-way westbound access for motor vehicles and the trolley, yet provide more seating and gathering space on the south side of the unit block of King Street.

OTHER RECOMMENDATIONS under consideration include a variety of changes, some of which could be achieved in the short term. For example, some of the recommendations include restricting parking along Union Street on Fridays and Saturdays, allowing pedestrians to reclaim the street. One of the most popular recommendations would be to add a raised crosswalk at the intersection of Union and Gibbon streets and another raised crosswalk with landscaping at the mid-block crossing where the Wilkes Street tunnel exists.

“Any traffic calming along the Windmill Hill Park area is a good idea,” said Callahan. “Those cars can get a quite a head of steam, going mostly to the north. So I think that getting the traffic to slow down is going to be a benefit for all.”