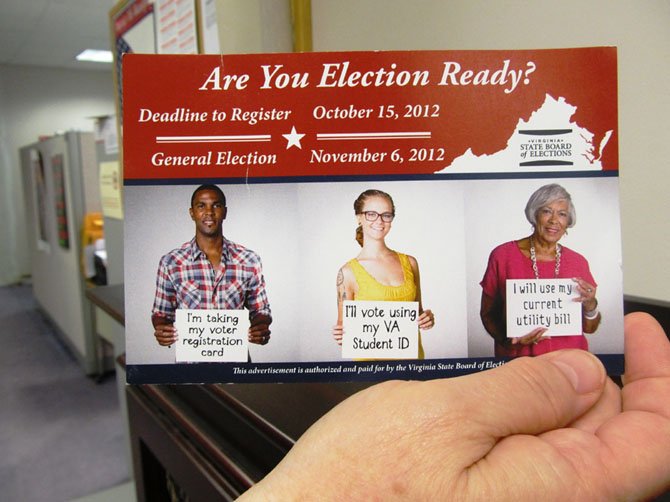 In conjunction with the State Board of Elections, the County recently kicked off a voter preparedness campaign—"Are You Election Ready"—to inform and educate voters on changes. Photo by Victoria Ross.

Frustrated by a bad economy, empty promises and echo-chamber politics, voter apathy is at an all-time high across the nation. According to a recent USA Today poll, about 90 million American voters, nearly 40 percent of those registered, won’t go to the polls this year.

Norma Rengel and Patricia Ferguson, with the Office of Elections, spent hours last week putting tent cards in cafeterias and lobbies in the Fairfax County Government Center, to educate voters and recruit volunteers.

But a slew of changes—from congressional redistricting to new voter ID laws—may leave even the most committed voter stymied at the polls this year. 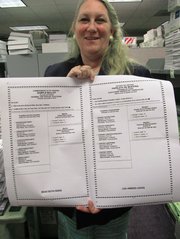 Quinn said voters, especially those who only vote during presidential elections, get complacent about where they vote or who their candidate is. She calls them "cicada" voters, who go into their cocoon every four or more years, and emerge thinking that nothing has changed.

"These are voters we want to reach now," Quinn said, "The most important thing is to check your voter status before Monday, Oct. 15," Quinn said. "Are you, in fact, registered? Have you moved? Do you know if your precinct changed during redistricting? You must update your voter registration if you have changed your address or name, or you may not be able to vote," Quinn said.

TO CHECK YOUR STATUS, call the Office of Elections at 703-222-0776 (TTY 711) or go to one of the websites listed. "We’d rather people call us with questions now than get frustrated when they go to the polls," Quinn said. 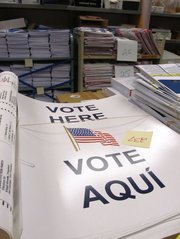 All voter information material must now be translated into Spanish to comply with new state mandates. Election employees have counted and bundled new signs that will hang in all of Fairfax County’s polling precincts.

Fairfax County’s Office of Election employees have been working overtime the past few months to make sure voters are "election ready" on Tuesday, Nov. 6. In conjunction with the State Board of Elections, the County recently kicked off an intensive voter preparedness campaign to inform and educate voters on changes.

Quinn estimates the election’s office currently gets 600 calls every day, and many calls concern the new voter ID measures. 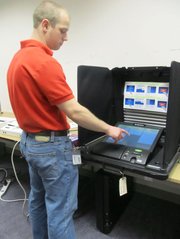 In addition to the optical scan voting machines, every polling place will be equipped with WINvote "touch-screen" machines, which have been used in Fairfax County since 2003. These touch screen machines are designed to provide voters with disabilities the ability to cast their votes unassisted. Luke Baranyk, voting machine custodian, demonstrates the touch-screen technology.

"There are a number of acceptable forms of Voter ID, and it’s important that this issue doesn’t discourage voters," Moran said.

In August, the Justice Department signed off on Virginia’s new Voter ID law, a bitterly contested measure that some claimed discriminates against minorities. Virginia, one of 16 states with a history of voter discrimination, must receive federal approval under the Voting Rights Act before making any changes to voting law.

The new law, which closed a provision allowing Virginians to vote without identification, also expanded the types of ID accepted at the polls.

"Virginia tweaked its voter ID laws this year to allow many new forms of acceptable identification," Quinn said in an online forum.

In addition to getting voters ready for the general elections, the office has also been preparing to comply with new mandates and changes.

"You must update your voter registration if you have changed your address or name, or you may not be able to vote."

Last year, the state mandated that all voter education material be translated into Spanish. While the county has complied with that mandate, they are still short on election-day volunteers, especially those who are bilingual in Spanish and English.

"One challenge for us is to recruit bilingual polling officials, and by law, Spanish is a priority," Rengel said.

Quinn said the Elections Office also spent $50,000 this year to beef up office security. Several new walls and barriers were constructed last week so visitors are not able to wander, intentionally or unintentionally, from one department to the next or get too close to where ballots are stored and counted.

"We know there are concerns about integrity, and we realize there are people in both parties who will try to skew elections, people who think the end justifies the means," Quinn said. The fact that Northern Virginia is now considered a battleground region in a battleground state spurred the new security measures.

"In the end, we want the votes to reflect the will of the people and they know that their vote counted," Quinn said.

Another way to ensure the integrity of elections, Quinn said, is to make sure polling officials are educated and up-to-date on the law and the latest technology. Travis Potter, an elections office training coordinator, said about 3,000 polling officials have undergone training since August. "One of the things we’re excited about is the electronic poll books," he said, which will allow voters to check in faster, and reduce waiting time.

ON ELECTION DAY, staff will be coming through voter lines with a handheld device called "Ask ED," which contains the entire County voter list to check once again if the voter is in the correct precinct. If there is a discrepancy between what’s on the voter’s card, and the most current information on the County’s election rolls, the staff person will call the registrar’s office.

"The only way your vote counts is if you are voting in the correct precinct. That’s why we don’t want people waiting until the last minute. When in doubt, call the elections office. We will pull the most current voter card and match it to our map," Quinn said.

It’s Voter ID, not "Photo" ID: When you arrive at your polling place, a voting official will verify that your name is on the registration list. Voters will be asked to present one valid form of identification. Acceptable forms of identification include:

Editors note: This story has been changed to correct the list of acceptable identification to be presented by voters at polling places.