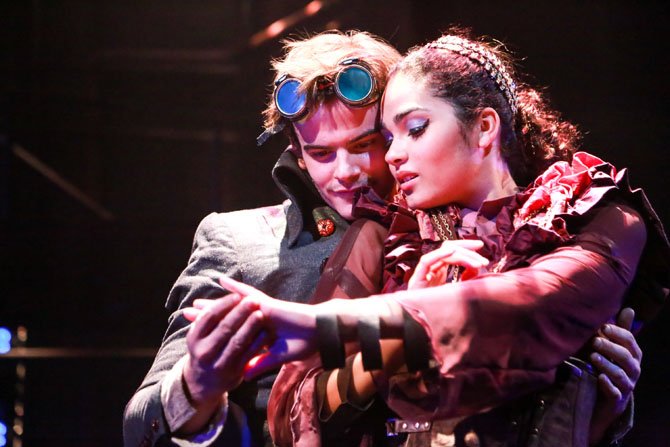 Arlington — If a picture paints a thousand words, then Alex Mills has crafted a masterpiece with his performance in “Jekyll and Hyde,” playing now at Synetic Theater in Crystal City.

Under the masterful direction of Paata Tsikurishvili, the wordless adaptation of the Robert Louis Stevenson classic fuses theater, dance, acrobatics, music and special effects into an incomparable evening of innovative theater.

Mills gives a riveting performance that defies tradition in the demanding dual role of Dr. Jekyll and Mr. Hyde and the duo’s descent into madness.

Alex Mills as Jekyll and Hyde, Brittany O'Grady as The Fiancee and the ensemble in Synetic Theater’s production of “Jekyll and Hyde,” which runs through Oct. 21.

Torn between two opposing levels of society, as well as conflicting impulses and desires, the ambitious and driven Dr. Henry Jekyll seeks to understand the origin and nature of the human soul, and, in the process, better all of humanity. First attempting to filter all evil from his own psyche, he rapidly loses control of his experiments, transforming into the elegant, charming and hideously psychopathic Mr. Hyde. The result is a terrible and shocking liberation of Jekyll’s darker side, with tragic consequences.

With sultry choreography by Irina Tsikurishvili, the ensemble cast mesmerizes the audience with standout performances by Peter Pereya as Lanyon, Rebecca Hausman as The Stripper and Brittany O’Grady as The Fiancee.

Synetic’s award-winning wordless style has earned more than 100 Helen Hayes nominations since the theater’s founding and allows the artistry and brilliance of other production elements to create a vivid re-imagining of the classic cautionary tale.

Lighting by Andrew Griffin, original music compositions by Konstantine Lortkipanidze, sets by Daniel Pinha and costumes by Chelsey Schuller seamlessly combine for a powerful and haunting adaptation where Stevenson’s Victorian world collides with the modern.

But it’s the captivating and unrivaled performance of Mills that leaves the audience in awe and makes this one of the region’s finest theatrical creations. If you see one production this year, make it “Jekyll and Hyde” at Synetic Theater.