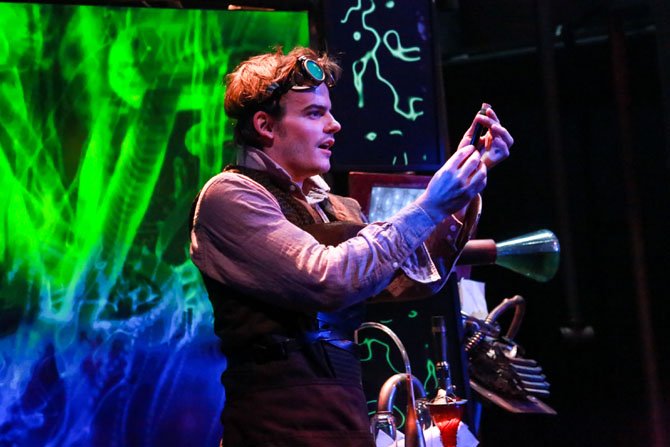 Arlington — The rising cost of tuition at Boston University had aspiring actor Alex Mills wondering what to do to make ends meet. At the suggestion of a friend, the Fredericksburg native auditioned for a production at Arlington’s Synetic Theater and the rest, as they say, is history.

“I was very anxious, excited and scared to first start working with Synetic,” said Mills, who stars in the title role in Synetic’s latest production of “Jekyll and Hyde.” “At the callbacks I attended I had no idea what to expect but I jumped in with both feet and never looked back.”

Mills has been a leading cast member of the innovative theater’s wordless productions since 2008.

“I had to adjust to the incredible physicality of the company which blew me away,” Mills said. “Until then I had only worked on shows from a very traditional background; an initial read-thru, examining the text, setting the blocking. Here, however, it was all about the heat of the moment; what can we bring to the table with the emotions we have at that time or what is inspired within us by a certain idea.”

Synetic Theater continues its ground-breaking tradition of re-imagining literary classics with this season’s “Jekyll and Hyde,” a bold, steampunked retelling of Robert Louis Stevenson’s cautionary tale. Spearheaded by Director Paata Tsikurishvili, Synetic reaches a new level of “synthesis” in this wordless rendition, utilizing silence and sound, music and dance, theater and cinema, to create a new and nightmarish adaptation where Stevenson’s Victorian world collides with the modern.

Torn between two opposing levels of society, as well as conflicting impulses and desires, the ambitious and driven Dr. Henry Jekyll seeks to understand the origin and nature of the human soul, and, in the process, better all of humanity. First attempting to filter all evil from his own psyche, he rapidly loses control of his experiments, transforming into the elegant, charming and hideously psychopathic Mr. Hyde. The result is a terrible and shocking liberation of Jekyll’s darker side, with tragic consequences.

Jekyll and Hyde is the opening production in Synetic’s 12th season and the first of four original works planned for the coming year.

“I enjoy the family atmosphere and the physicality,” Mills said of the theater company founded by Georgian artists Paata and Irina Tsikurishvili, who moved to the United States in the 1990s. “The company truly feels like a family and because of the unique nature of the training there is a solid group of core people that you get to know pretty intimately which translates into a lot of trust both on and off the stage.”