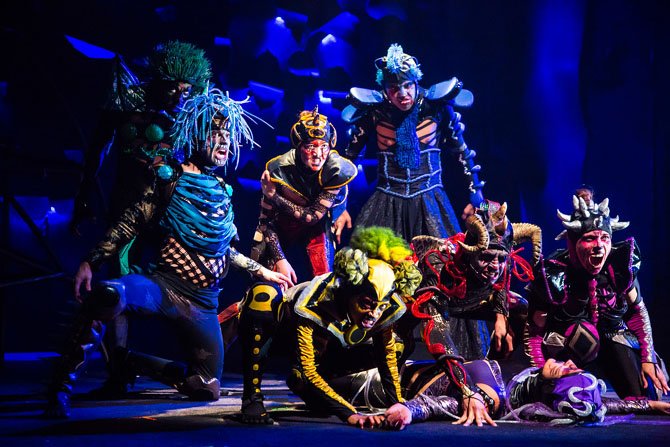 The Beasts from "The Island of Dr. Moreau," presented by Synetic Theater. Photo contributed by Johnny Shryock.

Originally a novel written by H.G. Wells and first published in 1896, the play tells the story of a shipwrecked young man named Parker (Alex Mills) who is rescued by a passing boat and deposited onto an island inhabited by the deranged Dr. Moreau and his "children" — the subjects of his bizarre experiments. It was made into the 1996 film starring Marlon Brando and Val Kilmer. 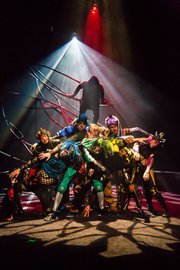 The Beasts from "The Island of Dr. Moreau," presented by Synetic Theater.

Synetic Theater is famous for its physical theater that fuses dynamic art forms — such as text, drama, movement, acrobatics, dance and music. Having already produced several Gothic horror adaptations like "Dracula," "Frankenstein," and "The Fall of the House of Usher," Synetic's new show is taking the concept to a whole new level.

"We've had animal characters in our shows before, in one form or another, but never characters that were a blend of human and animal," said Synetic Co-Founder and CEO Paata Tsikurishvili, who directed and stars as Dr. Moreau.

He decided to bring the classic horror to life because "it affords our actors the opportunity to move and perform in truly unique and striking ways, to use their physical skill sets to create a truly bizarre and striking hive of 'human beast' hybrids," he said.

As with much of H.G. Wells' work, "Dr. Moreau" is about science run amok, and about humanity's inability to control technology, said Tsikurishvili. "But with this particular story, Wells presents a biological angle as well, and I just find all this incredibly timely," he said.

"I wanted to convey this timelessness: Technology pervading every aspect of our lives, the constant need for physical improvement, our obsession with physical image -- the novel could've been written today," he said.

Tsikurishvili said he hopes the audience takes away the questions he believes Wells was asking in his novel -- "When it comes to technological and biological improvements (or what one believes are improvements), when is enough enough?" he said.

He adds: "At what point, in trying to improve quality of life and humanity, do you lose your own? I'm not saying we today are at any sort of point-of-no-return in terms of all this, but I do wonder how far we can go, where that point is."

Describing her character as "weird," Eliza Smith plays the passionate and emotional role of Moreau's daughter growing up on an island with a scientist as a father. Her idea of fun and play time can be described as creepy and abnormal to an average person, she said, but to the girl, it is all that she has ever known. "While she may be innocent, she does have a sense of what is wrong and right and displays that in the show," she said.

Alex Mills as Parker and Paata Tsikurishvili as Dr. Moreau in "The Island of Dr. Moreau," presented by Synetic Theater.

She was challenged in finding the right emotions and purpose behind the emotions in her different scenes during rehearsals, she said. And with the changing music and choreography, she said, "This is a piece that is constantly evolving and it is not solidified yet, so that is really a challenge to evolve smoothly, taking the changes in stride."

As far as audience takeaways, she said she hopes audiences become completely immersed in the show and really feel like they are on Dr. Moreau's island. "Even though H.G. Wells' story of manipulating living organisms is a work of fiction, she said cloning, DNA testing and other scientific yet controversial ideas are present in our world today. "Audiences should feel fascination, but also think about science and morality," she added.

Victoria Bertocci, who plays the role of the feline woman, adds, "Something about her consumes, invigorates and frustrates Moreau." She says: "She will fight for what she wants, a loner most of the time, because she is continuously searching for what she wants most."

Pasquale Guiducci as Sayer in "The Island of Dr. Moreau," presented by Synetic Theater.

Bertocci said her challenge was to find the balance between human and animal. "She is not one or the other, she is both, and I had to find the connection to my movement," she adds.

As far as audience takeaways, she said, "I hope the audiences realize that there is a beast in each and everyone of us, and it's up to us how we use that knowledge."

Actress Kathy Gordon plays the role of Beast 5. Because her character has goat legs sewn into the legs of her costume, it helped influence the way that she would walk. "I also studied small wild dogs and cats," she said, and because she is small in size, "I wanted to create a character that would fit with my own physical presence on stage."

Her finished costume had large horns sewn on her shoulders and large rib-like protrusions on her chest, "So I am having fun experimenting with how they change my body shape," she said. She also watched a few zombie movies and videos of animal experiments to help her understand how her character would react in certain scenes.

One of the challenges, she said, was working with the set and feeling comfortable moving on the bars. "Safety has been a No. 1 priority for everyone involved; every movement on the set is choreographed so that we all know where we are at any given moment," she said.

Synetic Theater will present "The Island of Dr. Moreau" Oct. 2 through Nov. 1. Show times are Wednesdays through Saturdays at 8 p.m.; with Sunday matinees at 2 p.m. Tickets are $35 and up; student tickets start at $15; senior citizens and military receive $5 off; group discounts are available. Synetic Theater is located at 1800 S. Bell St., Arlington, in Crystal City. Visit www.synetictheater.org or call 866-811-4111.