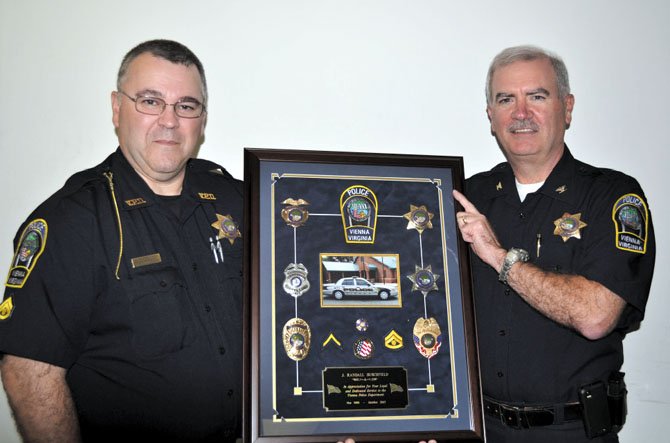 (From left) MPO Randy Burchfield shown with his presentation shadowbox and Colonel Robert A. Carlisle, chief of police. Photo contributed

On Oct. 1, MPO Jeffrey Randall “Randy” Burchfield retired from the Town of Vienna Police Department after 27 years of service to the citizens of Vienna. MPO Burchfield started his career in May of 1985 in the Patrol Division. MPO Burchfield also spent time as a detective, in the Criminal Investigation Section, from 1997 until 2000. In 2000 MPO Burchfield returned to the Patrol Division where his duties included that of field training instructor, evidence technician, certified intoxilyzer operator and assistant supervisor. In 1995 MPO Burchfield received the Vienna Optimist Club Officer of the Year Award and in 2003 he received the Dyer-Gunnell American Legion Post 180 Outstanding Law Enforcement Officer of the Year Award.