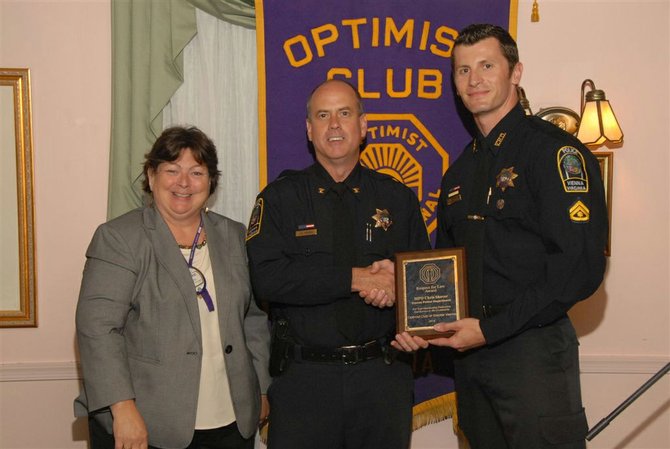 The Vienna Optimist Club held their annual banquet to honor the 2013 Charles A. Robinson Respect for Law Enforcement Award recipients Thursday, June 20 at the Marco Polo Restaurant in Vienna. MPO Christopher “Chris” Shaver was chosen as the Town of Vienna Police Department’s Optimist Club award winner. This award is given annually to one Vienna Police officer and one Fairfax County Police officer after having been nominated by their respective commanders. The award is named after long time Vienna Mayor Charles “Charlie” A. Robinson. The award was presented by Councilwoman Laurie Genevro Cole.

MPO Shaver has been a member of the Vienna Police Department since 2002 and is currently assigned to the Patrol Section.

In his nomination of MPO Shaver, Sgt. Tu Farhan wrote: “Chris (MPO Shaver) is an exemplary officer, who is dedicated and relentless in providing outstanding police services to the citizens of Vienna. He always holds himself to a high standard, always ready to pitch in whether asked to or not, never expecting anything in return.”

MPO Shaver is a rifle operator, evidence technician and a dedicated field training officer who has trained numerous officers. He continues to mentor the new officers even after they have finished their field training and have been assigned to other squads.

MPO Shaver’s father is a retired deputy chief of police for the Jamestown Police Department in Jamestown, N.Y.