Westfield Football Comes From Behind To Beat Chantilly
Votes

Westfield Football Comes From Behind To Beat Chantilly 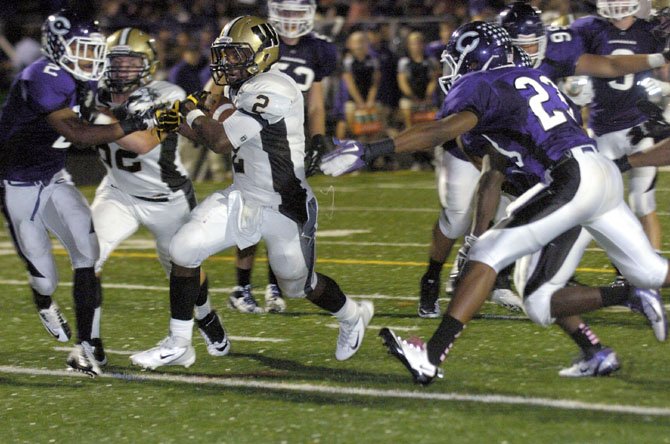 Westfield running back Dalaun Richardson scored two touchdowns, including the game-winner with less than 5 minutes remaining in the fourth quarter, against Chantilly on Oct. 5. Photo by Craig Sterbutzel.

Chantilly — The Westfield football team’s undefeated season was in jeopardy when Chantilly tight end Sean Huelskamp reached out with his left arm and pulled in an 11-yard touchdown pass from quarterback Sonny Romine with 9:06 remaining in the fourth quarter.

Trailing by four and needing an answer, Westfield leaned on its offensive line to keep the Bulldogs among the Northern Region’s unbeaten.

Westfield embarked on a 12-play, 80-yard drive, capped by a game-winning 2-yard touchdown run by Dalaun Richardson as the Bulldogs defeated the Chargers, 24-21, on Oct. 5 at Chantilly High School.

Westfield ran the ball 11 times for 73 yards on the drive. Richardson scored with 4:34 remaining and the Bulldog defense forced a turnover on downs during Chantilly’s ensuing possession. Westfield took over with 1:54 remaining and was able to run out the clock. The Bulldogs improved to 6-0, including 2-0 in the Concorde District.

“We like those quick touchdown plays,” 314-pound Westfield right guard Joon Yeo said, “but we take pride in ourselves running it inside, outside, grinding them [and] taking the time off the clock so our defense can rest.”

“They’ve been solid all year,” Westfield head coach Kyle Simmons said. “I thought they stepped up tonight. They didn’t seem to wear out and that played a key in us being able to do things in the fourth quarter. I’m real proud of them.”

“We like those quick touchdown plays, but we take pride in ourselves running it inside, outside, grinding them [and] taking the time off the clock so our defense can rest.”

Richardson, a 5-foot-6, 181-pound senior who played for Chantilly as a sophomore, led Westfield with 23 carries for 140 yards and two touchdowns.

“I told [our offensive linemen] to give it their all and I’ll get us in [the end zone],” Richardson said about Westfield’s game-winning touchdown drive. “They pushed it and I got in, so I thank them for that.”

Chantilly's Huelskamp described the way he felt after the loss as "awful." The Chargers had second-half leads of 14-10 and 21-17 but couldn’t hold off the Bulldogs. During Westfield’s game-winning drive, Bulldogs quarterback Chris Mullins threw incomplete on fourth-and-five from the Chantilly 15-yard line, but a Charger defender was flagged for pass interference, keeping the drive alive. Instead of Chantilly taking over possession with a four-point lead, Westfield scored the winning touchdown two plays later.

After the game, Lalli was sympathetic with his players’ feelings of disappointment, but he told them they need to move on.

“I said it’s going to hurt. You tried really hard, you played hard, so that’s fine,” Lalli said. “But we’ve got to get over it because we’ve got Oakton next week. We don’t have time to sit around and feel sorry for ourselves.”

Huelskamp had a strong performance in defeat. The senior caught four passes for 83 yards and two touchdowns, and set up the Chargers’ first score by intercepting a pass in the second quarter.

“Sean’s one of our best players, obviously,” Lalli said. “He goes both ways and he’s on a couple special teams. He’s key for us. I think he’s an all-region type player. … We needed one more interception from him. That would have been great. One more stop would have been awesome.”

Huelskamp said the Chargers learned “we’ve got to give it our all on every play and just keep pushing because we can hang with the best of them.”

Chantilly's Romine completed 6 of 9 passes for 100 yards and two touchdowns. He also ran 11 times for 67 yards. Running back DeAndre Harris carried 16 times for 96 yards and a touchdown. Ross Simms gained 60 yards on 10 carries.