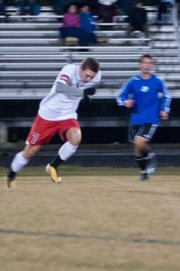 In spite of freezing temperatures and rain that drenched the field minutes before the game’s start, the Wootton boys’ soccer team defeated Whitman, 2-1, on Oct. 8 in overtime at Wootton High School.

In a game marked by intense and physical play, the Patriots left victorious due to two goals by senior Matt Hoy.

Both teams came into the game with impressive records that only added to the importance of the match, with 7-1 for the Whitman Vikings and 9-1-1 for the Wootton Patriots.

According to Wootton head coach Doug Schuessler, despite the importance of the match, neither Whitman nor Wootton had the time to get ready for their opponents.

“Neither team really had an opportunity to prepare for the other,” said Schuessler. “We both had played against tough opponents during the last week, and both coaches decided to give the boys a break over the weekend.”

According to Schuessler, the lack of preparation may have been a cause of the Patriots’ somewhat sloppy performance throughout the game.

“We really came out flat,” Schuessler said.” I haven’t seen us give the ball away as frequently as we did tonight.”

Despite constant turnovers and heavy pressure from the Whitman offense, the Patriots came into the second half with a 1-0 lead due to a goal midway through the first half by senior team captain Hoy.

“[Wootton senior] Spiros [Tsakos] brought the ball up, and he is someone who I’ve been playing with since we were in fifth grade,” Hoy said. “I just put my hand up and signaled to him, and he knew that I had an open shot.”

The Patriots’ lead would not last long, as Vikings senior Spencer Meschter scored to tie Wootton. 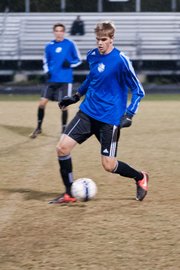 Whitman’s Spencer Meschter scored a goal during a loss to Wootton on Oct. 8.

The second half was marked by tough, physical play by both teams. There were multiple injuries that caused stoppage of play.

Whitman junior Edward Smith exemplified the intensity of both sides when he elbowed Hoy in the face during a struggle for the ball. Smith was given a red card after the elbow and was forced to leave the game.

“I’ve played against [Smith] in the past,” Hoy said. “We both are very rough players, and we sort up rubbed up against each other while fighting for the ball. I don’t think he meant any malice in it, but it did seem like he was trying to collide with me.”

The hit to the face did not stop Hoy, who stayed in the game and ended up scoring the final goal in overtime to give Wootton the win.

“It’s a good feeling,” Hoy said of his game-winning goal. “We had been working so hard for it all game, and I knew that I just needed to put power on the shot to get it past their goalie.”

According to Coach Schuessler, his team’s winning play was a mix of the luck of the bounce and the skill of his players.

“It was a good hustle effort,” Schuessler said. “When you get into a scramble in front of the net, you hope that the ball will bounce to one of your players, and luckily for us it went to Matt Hoy.”