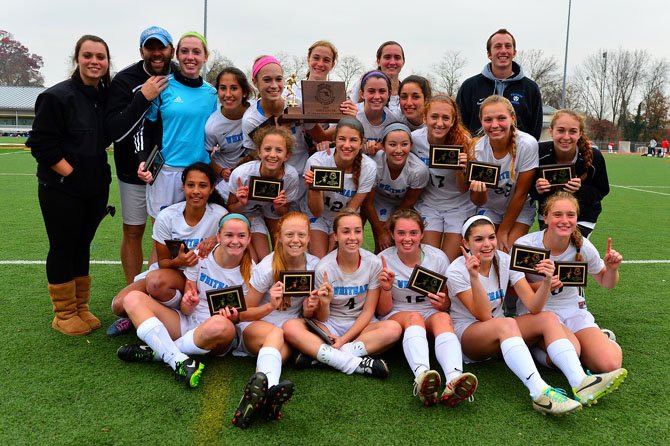 The year 2013 provided several exciting moments in local sports. For Whitman High School, the girls’ basketball team won a region title before suffering a one-point loss in the state semifinals. The girls’ soccer team made it all the way to the state final --- and won. For Wootton, the golf team repeated as state champion while the field hockey team fell just short of a state title.

Here is a look at the top moments in Potomac sports for 2013.

In 2012, the Whitman girls’ soccer team reached the 4A West region championship game before falling to Bethesda-Chevy Chase.

One year later, the Vikings captured the region title --- and kept on winning.

“The most fond memory I have of [winning the state title] is the joy on the girls’ faces when that final whistle blew,” Whitman head coach Greg Herbert wrote in an email. “Just to see them sprint out onto the field and hug each other with tears of joy in their eyes just let me know how much this meant to them and that all this hard work for them finally paid off.

“… What also made this season so special was that these girls have been working with me since middle school at Pyle and have set a goal (of winning) a state championship since those days. Each season we came closer and closer and finally we were able to breakthrough with this tremendous senior class leading the way.”

Whitman finished the season with a 16-1-1 record. After opening the campaign with a scoreless tie against Quince Orchard, the Vikings won 16 of their next 17 games, losing only to B-CC, 2-1, on Oct. 9.

After beating Richard Montgomery 4-0 and Montgomery Blair 3-0, respectively, in the first two rounds of the playoffs, Whitman went to a penalty-kick shootout with Churchill in the region semifinals. After playing to a 1-all tie through regulation and two overtimes, the Vikings beat the Bulldogs 4-1 in a shootout to advance to the region final.

“The biggest reason we were so successful this season was twofold,” Herbert wrote. “The first was that we had tremendous team speed. The pace at which our girls played really created problems for the opponents. The second was just the overall technical ability of these girls. They were so talented with the ball at their feet that it put defenses on their heels and allowed us to pin our ears back and attack the whole game. The combination of the two things really kept teams off-balance and allowed us to dictate the tempo of the game.”

Whitman players weren’t the only ones who enjoyed the team’s success.

“Lastly, perhaps what I found most enjoyable with winning was seeing the connection of Whitman soccer through the years,” Herbert wrote. “I had players from my first year of coaching attend the game, email me and call me to congratulate me. I had parents of those players do the same. I saw people who graduated in the 80’s come to the game and later email me and wish me congratulations. It was so nice to see how a whole community rallied behind the team during this championship run and support us.”

With the Wootton field hockey team in the midst of an untimed penalty corner in the Class 4A state semifinals on Nov. 4, senior midfielder Alex Yokley ripped a shot from the left wing. The ball zipped past the Dulaney goalkeeper’s right foot and into the back of the cage, sending the Patriots to their first state championship appearance since 1978.

The Wootton field hockey team finished state runner-up with a 16-1 record in 2013.

Yokley’s game-winner highlighted the Wootton field hockey team’s 2013 season, which included a 16-1 record, a 4A South region title and a berth in the state final. The Patriots’ lone defeat was a 4-1 loss to Severna Park on Nov. 9 in the state championship game.

Wootton had a dominant season, outscoring opponents 90-8 while allowing just 17 shots on goal.

“There is no single reason for this team's success,” Wootton head coach Kearney Blandamer wrote in an email. “It was a combination of heart, great chemistry, hard work, athleticism, skill, dedication to the sport year round, a buy-in by players and parents of the coaches' philosophies and expectations, and a little good old-fashioned LUCK!”

Yokley, who will play for the University of California-Berkeley, was one of three team captains, along with senior defender Dani Averill and senior attacker Allie Band.

Wootton advanced to the state playoffs with a 1-0 overtime victory against Bethesda-Chevy Chase in the region championship game. Senior midfielder Hannah King scored the game-winner with an assist from sophomore attacker Lacey Rubin.

Blandamer, who led Springbrook to a state title in 2003, wrote that the reaction Wootton received after the state championship game was one of her favorite memories.

“Walking toward our fans after the state championship game as they screamed and cheered and gave a standing ovation for the girls (was a memorable moment),” Blandamer wrote. “We felt overwhelmed by the love and support they showered on this team and its incredible accomplishments.”

The Wootton golf team’s spirit took a hit when Justin Feldman’s tee shot sailed out of bounds during a playoff hole for the individual 3A/4A state championship. Moments later, Feldman and the Patriots received some uplifting news.

“We [were] all very nervous and excited for Justin as he teed off to compete in the playoff for the boys’ individual title,” Wootton head coach Paul Williams wrote in an email. “However, our collective hearts sank as he hooked his tee shot out of bounds on the very first playoff hole. Shortly after his errant tee shot, we received word from the Whitman golf coach that it was official and we had repeated as state champs. So while we felt bad for Justin, we felt good knowing that he would be a state champ for the second straight year.”

“This win was truly unexpected,” Williams wrote. “I was happy just to win the district title and make it back to the state tournament this year. And then to repeat as state champs far exceeded my expectations.

“After the first round of play we were tied for second place with South River and eight shots behind Churchill. Even though we were eight strokes behind I felt that we had more gas left in the tank than most of our competitors did, because both Tim Golden and Jordan Weitz shot 90 and 91, respectively. Both of these golfers are very capable of shooting scores in the 70s. We managed to make up 19 strokes on the last day of the tournament. Delaney Shah improved her score by three strokes, Jordan improved his score by six strokes and Tim improved his score by 10 strokes. Justin Feldman was the steady one on the team posting scores of 73 both days.”

The Gaithersburg girls’ basketball team had ended Whitman’s previous four seasons when the two teams met in the 4A West region championship game on March 1.

This time, it was the Gaithersburg Trojans who turned in their gear.

“Gaithersburg had ended our season the past four years,” Whitman head coach Pete Kenah wrote in an email. “We had shed so many tears against that team. Guard Brittany Fleck was a member of two of those teams. Seeing the joy on her face when they presented us with the championship trophy is an image I’ll never forget.”

Whitman’s season ended in the state semifinals with a 33-32 loss to Baltimore Polytechnic. The Vikings finished with a 21-5 record. Whitman entered the playoffs as the No. 2 seed in the 4A West region and beat Blair and Walter Johnson before knocking off Gaithersburg.

“That team was so tough mentally,” Kenah wrote. “We were outsized many nights but refused to lose and always got defensive stops. None of the six seniors went on to play college basketball, which is rare. They were/are good friends who came together for what they knew would be their last season of organized basketball and made the absolute most of it.”