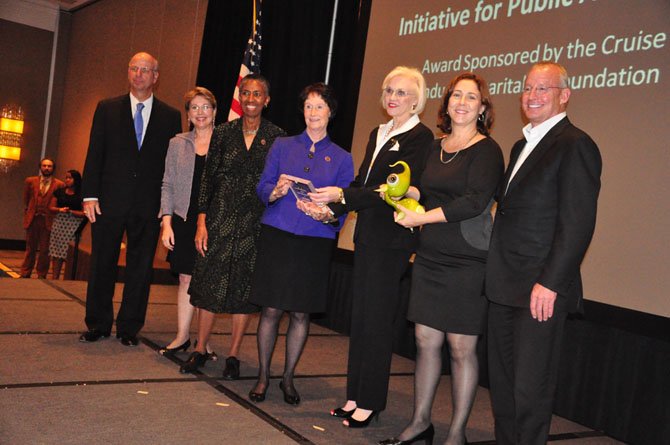 Members of the Initiative for Public Art-Reston are given the Arts Impact Award at the Arts Council of Fairfax County awards luncheon Friday, Oct. 12. Photo by Alex McVeigh.

Reston — The Initiative for Public Art-Reston was recognized by the Arts Council of Fairfax County Friday, Oct. 12 with the Arts Impact Award for their commission and placement of art in public places around the community. Founded in 2007 by local civic organizations and residents, the group created a Public Art Master Plan in 2008 to guide the future of public art.

IPAR has created many public artworks in recent years, including on a Glade Drive underpass with children from Hunters Woods Elementary School, and has plans for several new displays near Reston Town Center and the new addition to Reston Hospital. They are also in the process of releasing a documentary about public art in Reston, created by Reston native Rebekah Wingert-Jabi.

Joe Ritchey, IPAR board chairman, credited the response from the community on their projects and the creation of their master plan for IPAR’s success.

“The quality of the impact that IPAR has been able to have is directly related to the outstanding quality of leaders we’ve been blessed to have,” he said.

IPAR currently has an exhibit at the Reston Museum open through Nov. 11, and will host an panel discussion Thursday, Oct. 25 at the Reston Community Center Lake Anne about he past and future of public art in Reston. The event will also feature a screening of the documentary, starting at 7 p.m. More information is available at www.publicartreston.org.