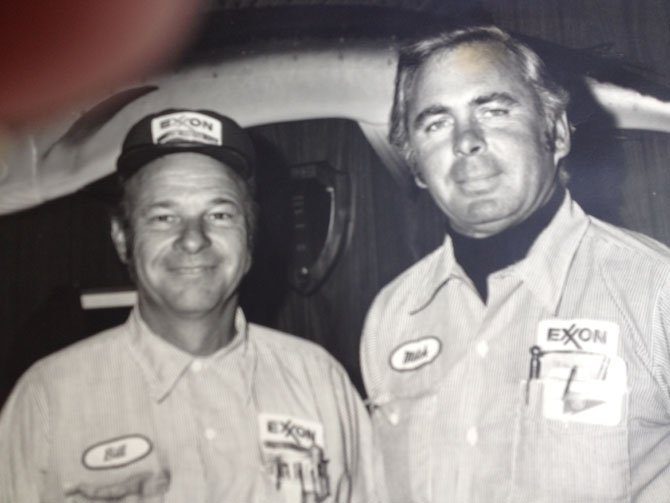 Clyde Eastham “Mitch” Mitchell (right) and William Schumacher, established “Mitch and Bill’s” ESSO, Potomac, in 1949. Located on a corner of Falls and River Roads, it is presently Mitch and Bill’s Sunoco.

“Tough, fair, generous and loved to party” was how he was described by those who knew him best, the crew at Mitch and Bill’s Potomac service station.

Clyde Eastham Mitchell, was the “Mitch” of Mitch and Bill’s. He died from heart failure Oct. 18 at Kingshire Manor Assisted Living, Rockville. He was 86.

Born July 2, 1926, in Culpepper, Va., Mitchell was a graduate of Stevensburg (Va.) High School and immediately joined the U.S. Navy. “He lied about his age,” his son “Mike” said. Following three years serving in the Pacific during World War II, he relocated to Bethesda where he was employed by his uncle, the owner of Eastham’s service station. It was here that he met his future business partner, Bill Schumacher, who at the time was still a high school student working part time.

As they say, “The rest is history.”

The pair teamed up to open their own station. “We got along fine for 32 years and never had an argument that I remember,” Schumacher recalled. He added, “One time there was a slight disagreement about buying a tow truck.” Apparently they ultimately agreed. Many who were around in those days recall there was a Mitch and Bill’s tow truck and when it went out on call. a dog named “ESSO” was perched on the front seat.

“Dad used to tell me there was nothing between here and the Potomac River when the station first opened in 1949. He said they could hear the waterfall on the river,” recalled “Mike” Mitchell. His dad also told him they could hear a car coming from a mile away. “It was a time when there were more horses in Potomac than there were cars,” he added.

“There was still a hitching post for horses down the hill where the drugstore was. When Dad heard the horse hooves coming he would run for the shovel,” said his son, “Mike,” 61, who started working at the station, “on the pay roll,” at age 13. He related, “the Potomac Almanac did a story on me then.”

Clyde “Mitch” Mitchell became involved in many Potomac activities as Potomac grew, and his business grew with it. He was very active in the Potomac Chamber of Commerce. “He served on the board of directors when I was president,” Harry Lowe, president of Lowe and Tillson Insurance and Associates, then located at the Village crossroads. “He was a great friend and always willing to help out. I remember, in the early ’50s, “Mitch” would open up the station lobby for all the kids to come in and stay warm while waiting for the school bus. He and Bill were part of a great generation,” Lowe said.

Leonard Proctor, an employee at the station for 45 years, concurred, “Everybody liked ‘Mitch’.” People, even though they didn’t need gas, often stopped by the station to just talk with him. It was Proctor’s famous egg nog punch that for many years brought hordes of Potomac citizens into the station on Christmas eve for a treat.

“Mitch” retired at age 64 following a stroke. Prior to then, one of his prime philanthropic interests was championing Potomac’s Little League Baseball team. He was also an avid golfer. “He took it up after his retirement,” his son said. “He would drive out, visit at the station and then head for the Falls Road golf course,”

Throughout the years hundreds of Potomac teenagers got their first jobs at Mitch and Bill’s. “They worked here during high school. Now, many who are successful doctors, lawyers and businessmen, come back to visit. They stop by to see who is still here,” said “Mike” Mitchell. Those who visit will still find Sean Ridge, general manager, and Harry Waters, who started at age 20, now service manager. “‘Mitch’ was very generous. He was demanding. You always had to be busy. He was also very fair,” Waters said.

Eugene Roesser, Jr., today a stockbroker, worked at Mitch and Bill’s for two years during his high school days. “Back then you serviced the customer. Mitch really knew his business. Roesser’s mother, Jean, former Maryland state senator, added, “They represented the spirit of Potomac and were a magnet for people through their personal service.”

Each and every employee mentioned “Mitch” Mitchell’s work ethic and fairness. “Mike” Mitchell added color to the picture when he explained, “Some times it was worse if you goofed up and Dad did not say anything. You had to stew in it all day.”

However, “Mitch” would also tell a good story. ‘Mike” Mitchell recollected, “Dad always considered himself to be a good judge of people. One day there was a young man looking for a job. He was just out of the service, a veteran, and really destitute. Dad talked to him for quite a while and decided he was OK. The man also needed a place to stay, so Dad checked around and found him a room. All the arrangements were made and the future employee needed money for the room rent. He asked for a week’s vacation pay in advance. Dad gladly gave him the money. He never saw him again.”

“Mitch” told the story on himself, “And I never let him forget it,” “Mike” Mitchell added.