Students GIVE Back in Big Way
Votes

Students GIVE Back in Big Way 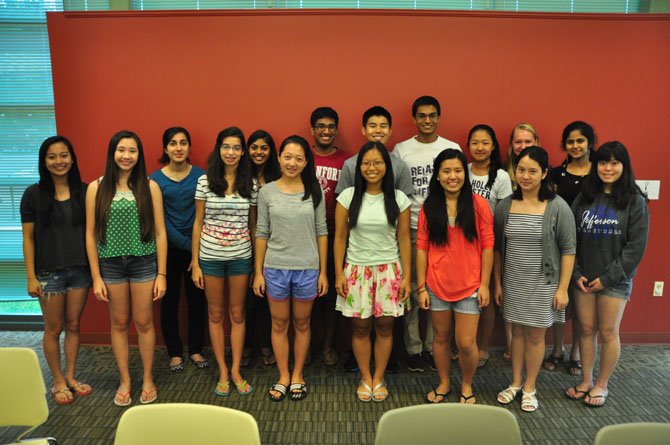 Members of the core team of GIVE, a youth-run nonprofit that tutors students in need at 12 different centers around the county. Photo by Alex McVeigh.

Fairfax County — During his freshman year at Thomas Jefferson High School for Science and Technology, Kevin Cao had the opportunity to volunteer at Belvedere Elementary School in Falls Church. What he learned there is having impact around the Fairfax County School system to this day.

"When we were volunteering, I saw a lot of students who just seemed to fall behind, and it didn’t seem like there were the classroom resources to make sure every single one of them could catch up," said Cao, who is now entering his senior year at TJ. "There was a very recognizable need for some sort of free educational resource, so we decided to think of a way to give those resources."

Cao, along with fellow TJ student Kartik Gupta and Robinson student Abrar Omeish, founded Growth and Inspiration through Volunteering and Education, or GIVE, three years ago. Since that time, the organization, which is completely student-run, has grown by leaps and bounds.

"Being student-run and peer oriented has advantages and disadvantages, but mostly it allows us to grow independently in the ways we think are best," Cao said. "It is a lot of responsibility, and there’s no parent or teacher acting on our behalf as a buffer, but it’s also more rewarding, because we’re the ones who directly see the fruits of our labor."

THEY STARTED tutoring around 50 students, which grew to 250 last year, and are expected to serve more than 1,000 this year. Last year they had four centers of operations, coming into this year they have 12.

"When we started, there were about 20 of us total, now we have 20 people just on our core team," said Sebastian Lerner, a senior at Thomas Jefferson and one of the group’s first tutors. "It’s been challenging when it comes time to focus on more than just working with the kids, doing the administrative stuff, talking to parents and teachers, but those are good skills to have. I worked at a summer camp as a technology programmer, and I had a lot of experience to draw from when it came to interacting with people."

From the three original members, soon they took on three board members, including Lerner. During that summer, they formed a core team of about 20 students to help run administrative tasks, coordinate with students, parents and teachers, as well as help raise money and run other outreach efforts.

"Taking part in a student-run group definitely took some getting used to," said Rachel Chon, a sophomore at Thomas Jefferson. "But it’s helped me become more outgoing, because there are always people to reach out to."

The members of the core team are chosen by the board as tutors who stand out to them and appear to be able to handle the additional responsibility.

"Some take it more seriously than others, which is fine, but when we see people who take the time to really get behind what we’re trying to do, they become very receptive," Cao said. "It’s been encouraging, because Kartik and I will be heading off to college next year, and we don’t want this to go away, we want the next generation to step up."

Not content with tutoring students, the group has extended its reach to include collecting PSAT, SAT, ACT and other test preparation books and even producing a children’s book.

"We started the PSAT book drive after I noticed my sister had a book that was five years old, just sitting on the shelf, and these things can be $60," Gupta said. "This year we were able to collect almost $1,200 worth of test prep books."

The book, "Being Different is What Makes Us Special!" is distributed to elementary schools in the area.

"Working on the children’s book was one of my favorite experiences," said Avanti Shirke, a senior at Thomas Jefferson. "It’s about diversity and anti-bullying, which I thought was a good message. I’ve always liked to write, but this was my first major project."

"I had been looking for a place to tutor, and I heard from other students that this would be a good opportunity to branch out into other subjects than just English," said Thomas Jefferson sophomore Mona Bugaighis. "I quickly learned the huge amount of patience every one of my teachers must have. I’m working with a few kids for two hours at a time, and I’m exhausted, I can’t imagine working with hundreds of kids all day, five days a week."

While most members of the core team have taken on additional responsibilities, they still enjoy the tutoring itself.

"After I started tutoring and formed a connection with the kids, it’s not something I wanted to give up," Chon said. "It’s taught me a lot of patience, I’ve learned that every student has different patience levels, and it’s been my job to learn to work with that."

Sreya Atluri, a sophomore at TJ, said once the students start seeing results, it becomes a domino effect.

"Once the kids see that there are people that can do something for them, they start acting completely different," Atluri said. "And the more we can expand, the more children we can reach."

The organization has already impacted a number of children in very tangible ways.

"We had a mother come up to us teary-eyed about how her son was going to be held back because his test scores weren’t good enough," Cao said. "Through GIVE, we were able to get him on track and he ended up getting high enough scores on his SOL tests to pass."

"We had a conference with a woman last year whose son was falling behind and the principal recommended he come to GIVE," he said. "He was a troublemaker, but he got one of our best tutors and was able to pass his grade. And his younger brother, who looked up to him, began doing better in school as well."

While GIVE’s growth has been very rapid, so has the demand for their services, and Cao said he doesn’t see any reason to slow down.

"I want to keep inspiring and collecting people who want to go above and beyond to help people get a new outlook on not only education, but development as a person, leadership," he said.

THIS YEAR, GIVE tutors will be operating out of four community centers, Bailey’s, James Lee and Willston Multicultural Center in Falls Church and Southgate in Reston. They are also present at the libraries in Centreville, Springfield (Richard Byrd), Woodrow Wilson (Falls Church), Fortnightly (Herndon), Thomas Jefferson (Falls Church) and the Sterling library. They also work at the Mason District Government Center and the Lincolnia Adult Health Care Center.

More information for students interested in tutoring, being tutored, or getting involved in GIVE’s other projects can be found at www.giveyouth.org.