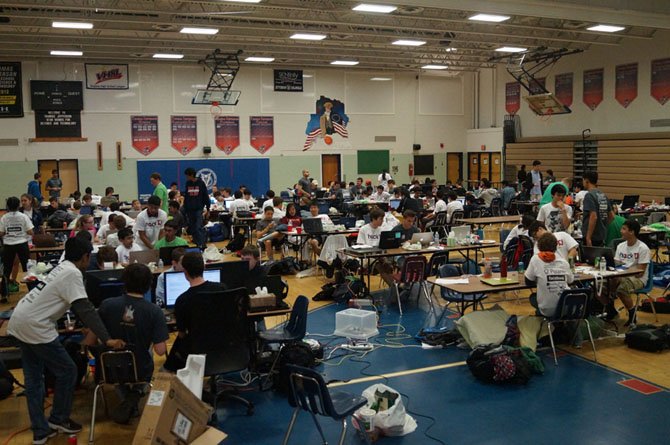 The TJ Hackathon took place in the TJHSST gymnasium April 26-27. Teams of students came together for a 24-hour marathon of computer coding and programming to create products which they would reveal in demos to the other participants and mentors from companies such as Facebook and Palantir. Anagha Srikanth

When a voice over the loudspeaker announced, “free swag outside,” a stampede of teenagers cleared out the Thomas Jefferson High School (TJHSST) gymnasium in less than a minute. Even after almost 20 hours of coding and programming, the students were at no loss for enthusiasm, especially for free paraphernalia decorated with the TJ Hackathon logo.

Kim Holton, a volunteer whose son was participating in the hackathon, said, “They all seem really tired and they’re dragging, but they’re excited.”

THE EXCITEMENT in the atmosphere was what made possible the 24-hour marathon of computer programming on April 26-27, at the end of which students would demo the products they had created with a team of peers.

Freshmen Shubham and Shrey Gupta, of Ashburn, demonstrated a program which merged a website with an application in a database. Events could be scheduled on the website and the data would then be sent to the application, which would be accessed on a phone or other mobile device. Shubham said the program could be useful for doctors or businesses to make appointments with their patients and customers. 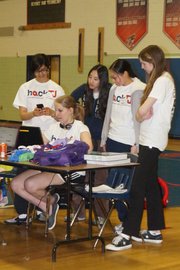 Juniors (from left) Sonia Thakur, of Herndon, and Katie Hough, of Fairfax Station, work with other members of their team to put together a demo presentation for their program.

To provide technical assistance to the students, TJHSST’s Future Business Leaders of America (FBLA) and Invent Team clubs had contacted sponsors such as Palantir and Facebook who sent employees to the event as mentors.

Ben Strahs, who works for Facebook, said he often attended college hackathons on behalf of the company, but this was his first time at a high school hackathon.

“We were a little worried that the students had basic CS skills but not a lot of experience, but people have picked up skills a lot faster than even college students do,” Strahs said. “No one’s left yet and they’re all very close to getting done and we’re super impressed with everything that is being built and getting done.”

Many of the students said their favorite part of the whole experience was having the time to work on a programming project without being interrupted by their other obligations as high school students. While some students had brought sleeping bags to take naps, others hadn’t slept at all since the event kicked off the previous evening. Running on caffeine and snacks, students were energized by their genuine interest in the projects they were working on.

Sophomore Shantanu Gore, of Fairfax, said, “I like the way we can just change stuff on the fly and not be tied down by guidelines.”

WITH TWO HOURS TO GO, students were putting the finishing touches on their programs and planning presentations for the demos that would follow.

“When you’re putting code together quickly, you can’t always put together this beautiful thing. Sometimes you just have to go with the ugly one which works the best,” junior Katie Hough, of Fairfax Station, said.

Co-organizer Mayank Jain, a TJHSST alumni and current freshman at the University of Illinois, said he had initially been worried about how many teams would actually finish, but as the event went on he was reassured by the progress students were making.

Jain said, “The students all learned something about how real programming differs from classrooms and how to build something from scratch. It’s just been so incredible so far.”