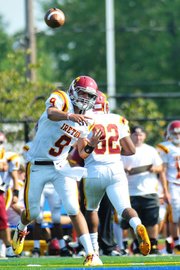 Arlington — Trailing 21-0 in the second quarter of their season opener against Bishop O’Connell, Bishop Ireton football coach Tony Verducci called a timeout and addressed his team. Players took a knee as Verducci tried to settle the Cardinals and get them heading in the right direction.

O’Connell would score on the opening possession of the second half to take a 27-0 lead. From that point, however, Ireton showed the kind of fight Verducci was looking for.

O’Connell defeated Ireton, 27-12, on Aug. 31 on the Knights’ new turf field in Arlington. While the Cardinals fell short, Verducci was pleased with how his team finished the game.

"I called the timeout during the second quarter just to try and settle ourselves and to kind of get back to a comfortable base and compete and build from there," he said, "and I was really pleased with the way that we competed and the effort that we demonstrated for the rest of the afternoon. …

"I told them that we have the skill to win, we have the character to win and that we needed to have the courage to compete, and I thought they answered that challenge very, very well."

Zingler completed 29 of 45 passes for 294 yards. He completed at least one pass to eight different receivers. Brandon Williams-Price had six receptions and Hudson Sullivan, Drew Smith and Austin Carter each had five catches. Miller led Ireton with 22 rushing yards.

"I told them that we have the skill to win, we have the character to win and that we needed to have the courage to compete and I thought they answered that challenge very, very well."

Ireton put itself in a hole early. The Cardinals went three-and-out during the game’s opening series, followed by a bad punt snap on fourth down that gave O’Connell possession at the Ireton 3-yard line. The Knights scored a touchdown on the next play.

"I think that we made our way up the learning curve," Verducci said. "Obviously, we talked during the week about being prepared for the emotional pitch that we knew they would have at the beginning of the game, and I just felt like for whatever reason we didn’t match that, and so the bad snap on the first punt definitely left us scuffling."

"Our fans were fantastic," he said. "It’s easy on a hot day, when [the opponent scores] on the first possession of the second half to think that you’re going to fold up your tent, and our fans were terrific. They energized us and I think that we really felt like we were part of a community competing."