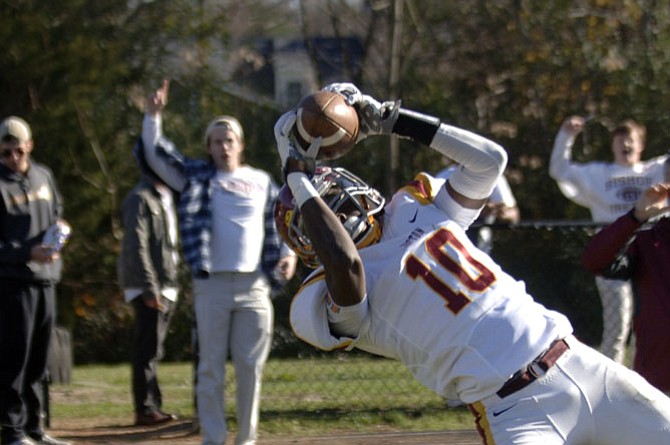 Bishop Ireton receiver Corey Johnson attempts to bring down a pass in the end zone during Saturday’s state championship game against Benedictine. Johnson was ruled out of bounds. Photo by Craig Sterbutzel. 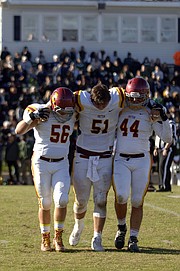 After taking a punishing hit from a Benedictine defender and suffering a concussion during Saturday’s first half, Bishop Ireton junior running back Perris Jones stood on the sideline without his helmet and encouraged his teammates.

After suffering a right ankle injury in the first half, defensive lineman Trey Lovisone had the ankle taped and attempted to go back in. Later in the game, he was helped off the field by his teammates and would spend the remainder of the contest navigating the Cardinals sideline on crutches.

Senior linebacker/running back Bernie Hayes dealt with a shoulder injury during the game, later describing the pain as “hell.”

By the end of the VISAA Division I state championship game, the Bishop Ireton football team was beat up both physically and on the scoreboard, losing to the Cadets 35-6 at Benedictine College Preparatory in Richmond.

While the Cardinals fell one win shy of a state title for the second year in a row, head coach Tony Verducci told his players following Saturday’s game that the pain will fade with time.

“I told the boys in the huddle at the end of the game that I’m proud of them and that the bonds that they built over the course of this year transcend sport,” Verducci said. “The result, it’s not the one that we wanted, [but it] doesn’t in any way shape or form reduce the significance of the accomplishments. And I told them that over time the pride will overcome the disappointment.”

“We’ve worked really hard,” said Lovisone, a four-year varsity player. “This senior class turned a 1-9 program into a two-time state-championship appearance program. That means a lot. Right now it stings, but I’m sure we’ll get over it and I will love these guys for the rest of my life.”

Benedictine defeated Bishop Ireton 49-0 in their regular-season meeting on Oct. 17. Lovisone said the Cardinals went into Saturday’s game wanting to prove the Cadets weren’t 49 points better — and for one half, Ireton held its own.

After a Lovisone sack forced a Benedictine punt in the first quarter, Ireton drove deep into Cadets territory and faced fourth-and-one at the 2-yard line. The Cardinals ran a quarterback sneak, but lost a yard and turned the ball over on downs.

On the ensuing play, Benedictine quarterback Scott Bracey raced 96 yards down to the 1-yard line. He scored on the next play, giving the Cadets a 7-0 lead.

Ireton’s next drive reached the Benedictine 13-yard line, but after three straight incompletions — including a fade pass that Corey Johnson nearly brought down in the end zone — the Cardinals settled for a 29-yard David Cooper field goal.

Bishop Ireton running back Bernie Hayes carries the ball against Benedictine on Saturday.

After forcing a Benedictine punt, Ireton again drove inside the 5-yard line. Facing fourth-and-goal at the 2, Cooper made a 19-yard field goal to cut the Benedictine lead to 7-6.

At a glance, Benedictine held advantages in size and speed, but Ireton managed to hang around. How did the Cardinals keep from getting intimidated?

“I looked to my right and left and looked at my brothers and knew that I can’t be scared,” Hayes said. “I’ve got to be brave for them so that’s what makes me go out there and hit anybody that I can, as hard as I can.”

Benedictine, however, would eventually pull away. The Cadets took a 14-6 lead on a 1-yard touchdown run by Ellis Brooks with less than a minute remaining in the first half, and extended their advantage to 21-6 when Brooks returned a fumble 20 yards for a score on the first play of the second half.

It didn’t help the Cardinals that Jones missed the entire second half with a concussion. Entering the game, Jones had rushed for 1,523 yards and 14 touchdowns, and caught 22 passes for 441 yards and three scores this season, according to stats on maxpreps.com. Jones carried six times for 15 yards on Saturday.

“When you have somebody who accounts for that much of your offense,” Verducci said, “... the difference between [plan] A and B is significant.”

Ireton had won four straight games prior to Saturday’s loss, including a 43-20 victory over Flint Hill on Nov. 14 in the state semifinals.

“Right now, [I’m] just a little disappointed,” Lovisone said. “I also love every one of these guys and I know we all worked our butts off for that trophy, we just came up a half-step short, like Coach Verducci said.”